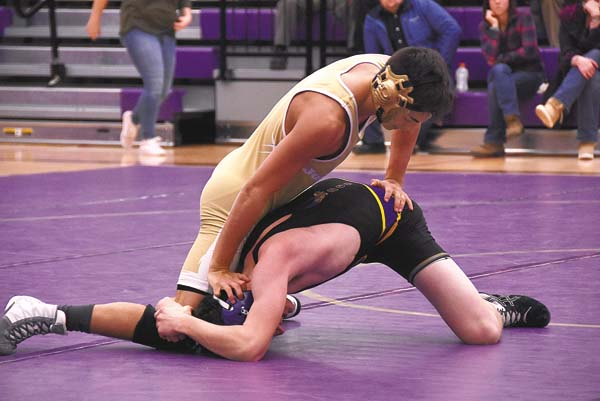 JOHNSTOWN — With first place in the Western Athletic Conference standings on the line, the Fonda-Fultonville/Johnstown wrestlers squared off against Duanesburg Thursday night at Johnstown High School.

Fonda-Johnstown dominated the matches in the lower weights to build a 28-0 lead in the team scoring.

However, Duanesburg came back in the upper weights to send the match into the decisive bout at 285 with the score at 34-28 in favor of the Eagles.

FoJo’s Tanner Warner and Duanesburg’s Lucas Welch squared off at 285 with the bout being undecided until late in the final period when Welch earned a pin fall to lock up the 40-28 victory and first place in the WAC standings. 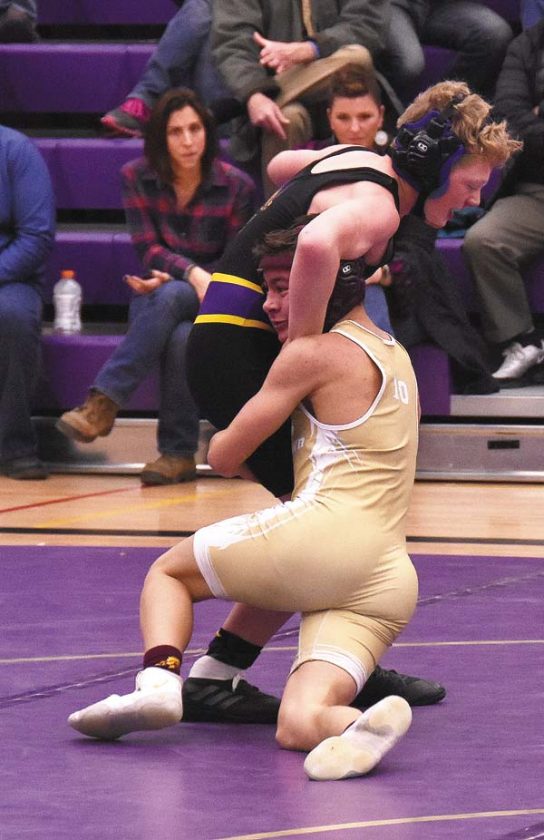 Duanesburg's Logan Krouse attempts to work an escape from Fonda-Johnstown's Zen Myles during the 126-pound match at Thursday's Western Athletic Conference match at Johnstown High School. (The Leader-Herald/James A. Ellis)

Dylan Cotter got the run through the lower weights going for FoJo with a 7-1 decision over Dan Stealey at 99 pounds before Loretta Newcomer and Owen Hicks collected forfeits at 106 and 113 respectively.

Justin Kearns picked up a the fall at 120, with a first-period pin over Taylor Lawrence before Zen Myles earned a 17-3 major decision over Logan Krouse and Jon Cranker decision David Nicolella 8-3.

Jack Holmes started the Eagles run, earning an 4-2 decision in a tight match against Brady Myles at 138 and Shane Chiofalo picked up a 5-2 decision over Nate Schrom.

Jacob Suits picked up a last-second near fall against Alex Sheldon in the 220-pound match to secure at least a tie for the Eagles.

Welch, who bumped up from 220 to face Warner in the decisive bout, trailed 5-1 heading into the third period after the buzzer thwarted a possible match-tying pin by Warner at the end of the second period.

Welch managed to turn Warner late in the bout to pick up the pin fall and secure the Eagles’ victory.

Fonda-Fultonville/Johnstown’s hopes for a WAC championship are still alive as Duanesburg and Canajoharie-Fort Plain will go head-to-head next Thursday at Canajoharie High School. A win by C-FP would set up a three-way tie for the league championship.

“We could share a three-way tie but I was really hoping to get this one tonight but it didn’t happen,” Oeser said.

DOLGEVILLE — Blue Devils could not recover from giving up four forfeits to Morrisville-Eaton as they fell 39-36 in Center State Conference wrestling action Thursday at Dolgeville High School.

SCHOHARIE — Canajoharie-Fort Plain won eight of 12 weight classes on its way to a 46-21 victory over Schoharie in a Western Athletic Conference wrestling match Wednesday.

Mohammed Elkadi (170) and Dominick Snyder (285) won by pin for Schoharie, while Austin Lints (132) won by technical fall. Andrew Hahn won by major decision for the Indians.