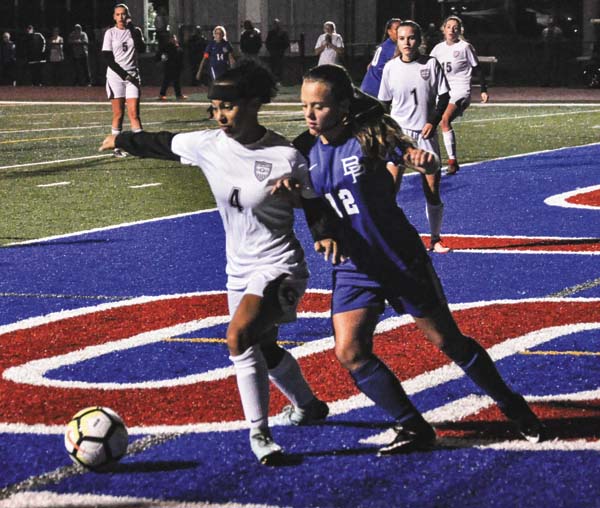 BROADALBIN — After dropping five-straight matches, the Gloversville girls’ soccer team put one in the win column.

After battling through a scoreless opening half, the Lady Dragons tallied the game’s only goal when Sydney Loux finished off a pass from Angel Anderson to give Gloversville a 1-0 Foothills Council victory Monday night at Broadalbin-Perth High School.

The opening half featured both teams creating scoring opportunities that were met by strong defensive back lines that allowed good looks for goalkeepers Katie Hastings for Gloversville and Morgan Rossi for the Lady Patriots.

“I thought early we had a lot of chances but credit to them, they kind of figured us out and took away our dangerous chances and it was an even game after that,” Gloversville coach Mike Hallenbeck said.

The back-and-forth play continued through the early minutes of the second half with both teams having opportunities in surges of possession by both teams. 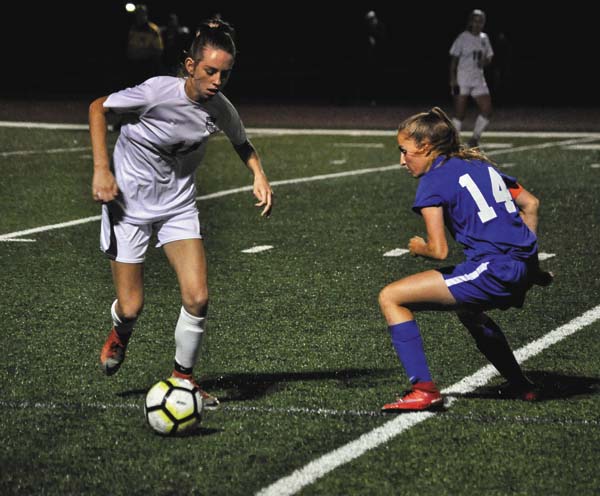 The Lady Dragons put pressure on the B-P defense with just over 28 minutes left to play but a pair of aggressive play in the box with Rossi punching crossing passes away kept the game scoreless.

Gloversville kept the ball locked in to the Lady Patriots defensive zone and final broke the scoreless deadlock with 23:34 left to play.

Anderson settled a clearing pass near midfield and made multiple cuts with the ball to shake her defender before pushing a diagonal ball through the B-P defense that Loux ran onto and fired under a diving effort from Rossi and into the far side netting for a 1-0 advantage.

“It was a phenomenal pass from Angel,” coach Hallenbeck said. “I was just about to yell to her to get off the ball and then she played a pass like that. You couldn’t ask for a better ball. Then Sydney had the composure just to pass it into the side net. It was a great finish.”

The Lady Patriots looked to answer the goal but the Gloversville defense stepped up to keep the B-P shooters on the outside and Hastings backed them up cutting down crosses and opportunities to secure the Lady Dragons victory. 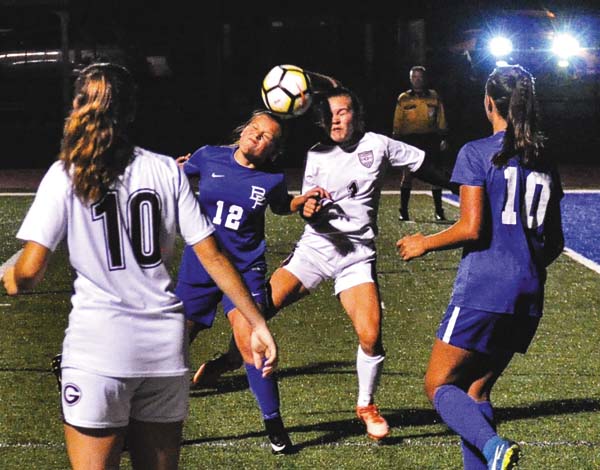 “We never did find our rhythm tonight, unfortunately,” Broadalbin-Perth coach Rob Klug said. “We had some chances and put ball across the box. We talked about it and then it seemed liked we started rushing to put ball across the box. We had spurts here and there. It is tough when you play a good team and don’t play for 80 minutes and we only played two or three minutes at a time here and there.”

“When I say defense, I mean team defense. Defensively, as a team we were very solid tonight,” coach Hallenbeck said. “I was very happy with how we played tonight. We looked at our final stretch and if we keep playing like we have been playing and put a couple in the net I like our chances.”

Gloversville (5-8 overall, 3-7 Foothills) will play its final regular-season home game Thursday against Schuylerville, before closing out the regular season on the road against Amsterdam on Oct. 9 and Scotia-Glenville on Oct. 11.

Broadalbin-Perth (6-5-1 overall, 4-5-1 Foothills) also has three games left before entering postseason play. The Patriots will travel to play South Glens Falls Thursday and Johnstown on Oct. 9 before closing out the regular season with a home match at Patriot Field against Amsterdam on Oct. 11.