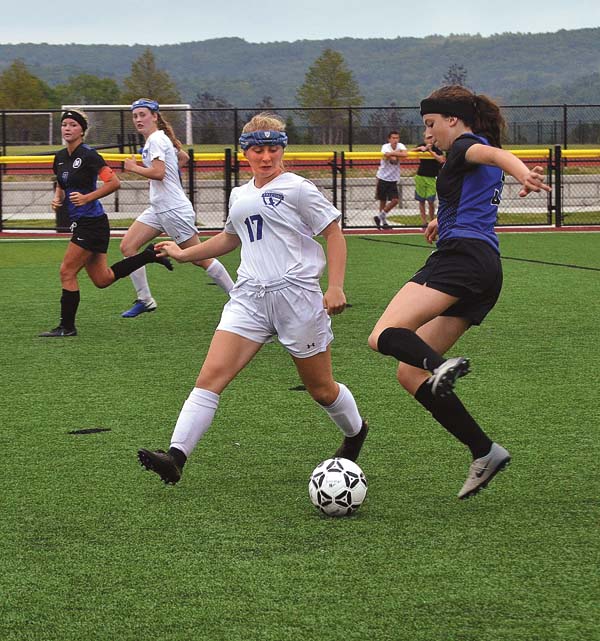 Mayfield's Kelsey Meca (5) attempts to cut the ball back while under pressure from Northville's Avery Feldman (17) during the consolation match of the Fourth Annual Scott Retersdorf Memorial Tournament Saturday at Gloversville High School. (The Leader-Herald/James A. Ellis)

GLOVERSVILLE — For just over 48 minutes, the Gloversville Lady Dragons withstood a solid offensive attack by the Ballston Spa Scotties.

With 31:40 left in the championship match, Sarah Rule broke through to break the scoreless deadlock and opened the door for the Scotties as they went on to defeat the Lady Dragons, 3-0 and claim the championship trophy at the fourth annual Scott Retersdorf Memorial Soccer Tournament Saturday at Gloversville High School.

“The girls love to come here and support this tournament and our family,” Ballston Spa coach Brian Retersdorf said. “This team has been together for a number of years, just like Scott’s [coach Retersdorf’s brother’s Gloversville High School 2000 team] was. They have been playing together all their lives and it shows. I want to thank coach Mike Hallenbeck and the people of Gloversville for hosting this tournament every year. It means a lot to me and my family.”

Ballston Spa set the tone for the championship match early, using their speed and ball control to create opportunities but the Gloversville defense, led by sweeper Libby Cook and goalkeeper Katie Hastings was up to the task, keeping the Scotties scoreless through the opening 40 minutes. 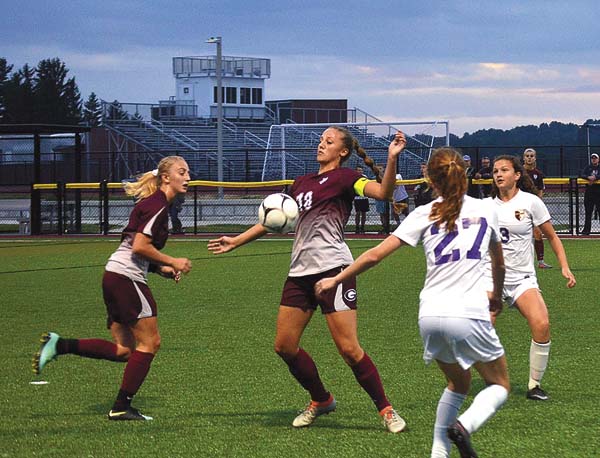 Gloversville's Angel Anderson looks on as Harmony Philo (18) traps the ball down in front of Ballston Spa's Sam Devito (27) and Madelynn Barnum (3) during the championship game of the fourth annual Scott Retersdorf Memorial Tournament Saturday at Gloversville High School. (The Leader-Herald/James A. Ellis)

The Scotties picked up the pace early in the second half and put a solid attempt on net that Hastings dove to her left to deflect wide of the mark.

The Scotties kept the pressure on and finally broke through when rule received a pass from the right side and fired a left-footed shot into the lower right corner to break the scoreless tie with 31:40 left to play.

Just over a minute later, Rule dropped a pass to the penalty stripe where Madelynn Barnum was in position to drive the ball into the back of the net for a 2-0 advantage.

Five minutes later Kristen Lewza gathered in a clearing pass out of the back and sent a low shot skipping into the net to stake the Scotties to a 3-0 lead with 25:27 left to play.

The Lady Dragons regrouped and began to move the ball deep into the Ballston Spa defensive zone and got their first shot on frame with 7:05 left to play when Sydney Loux put a direct kick from 25-yards out on net that Scotties’ goalkeeper Shaylee Andress gathered in for the save.

The Lady Dragons continued to move the ball in the midfield but could not break through for a score before the final horn sounded.

Gloversville coach Mike Hallenbeck was pleased with his team’s effort.

“We are talking Ballston Spa, which is one of the, if not the best team in the A’s this year,” he said. “We knew if we tried to outscore them it wouldn’t be pretty. We kind of sat in and limited their dangerous chances and gave them shots from 20 to 25 yards out in the first half. In the second half, they worked to get the ball wide and we had one little mental break and they got the ball wide, drew it across the middle to the open girl and she buried it. Once they got that first one it just kind of took the wind out of our sails a little bit. They put in two more quick ones before we regained our composure and finished the game strong.”

Ballston Spa (3-1 overall, 1-1 Suburban Council) finished with 16 shots on net, while the Lady Dragons (2-1 overall, 1-0 Foothills Council) had one. Hastings collected 10 saves and was active off her line cutting down attempts, while Andress had one save for Ballston Spa.

“These girls are one of the best teams I have had in this program,” coach Retersdorf said. “This is the best they have played all year and I think if they continue to do what they did tonight our season outlook and hopefully our run into sectionals will be one of the best we have ever had.”

GLOVERSVILLE — Mayfield’s Kelsey Meca scored three goals but it was not enough as Northville got two goals apiece from Brytney Moore and Kerrigan Groff to claim third place in the Retersdorf Memorial Tournament.

Groff picked up the assist on Moore’s goal with 4:45 off the clock in the second half and Meca answered the score a minute later with her second goal of the match off an assist from Lindsey Hampton to tie the game at two apiece.

Moore broke through for her second goal with 26:57 left and Groff got was proved to be the game winner with 11:17 remaining.

Meca completed her hat trick with 1:12 remaining to close the final score to 4-3.

For the match, Northville held the edge in shots on goal 18-11 and in corner kicks 5-3. 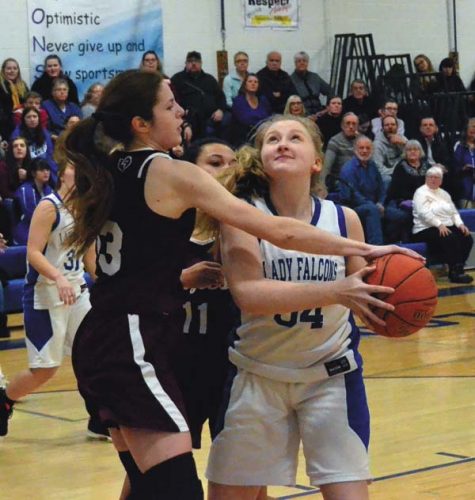