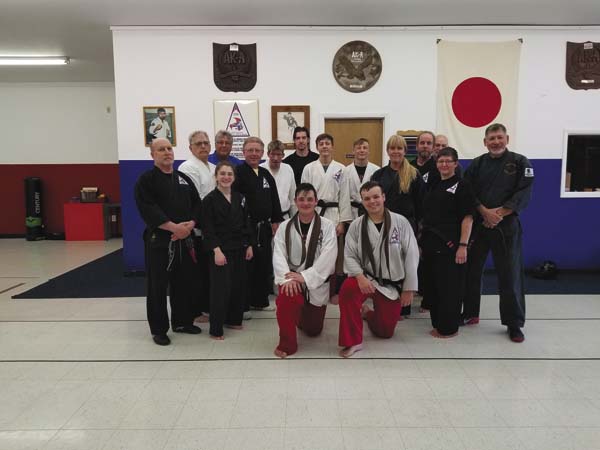 Advancing in rank to first-degree black belt were Schuyler Claes and Matthew Bowler of the American Zen-Do Kai studio in Johnstown.

They both train under chief instructor Rob Streeter.

Claes has been training for five years and is active in 4H and his church while attending Fonda Fultonville High School. He has also received 4H master showman, grand champion for Western riding, attended ELCA Youth Group Conference in Detroit, acolyte and numerous other activities in his church.

Claes will be attending SUNY Canton to become a vet tech this fall. He currently works at Harvey’s Home, Garden and Pet Center and also volunteers at Veterinary Clinic.

Claes also is a valued member of the Zen Do Kai, assisting with the intermediate junior students and always eager to help the other students.

Bowler has been training for seven years and attends Fonda-Fultonville. He participates in all-county, is in wind symphony and select chorus, as well as a bowling team and works part time at TJ’s Pizzeria.

Bowler assists in the junior program and participates successfully in local karate tournaments.

Testing was held at the Johnstown Zen-Do Kai in front of test boards consisting of senior ZDK black belts and a large crowd of friends and supporters.

The Johnstown ZDK club was the first martial arts club in Fulton, Montgomery, and Hamilton counties.

It was established in 1969 by Michael Campos who directs the ZDK Association. The club is located at 490 N. Perry St. and is directed by Rob and Bonnie Streeter.

Michael Campos, ninth Dan. Campos started his training in 1959. He travels nationally and internationally instructing seminars on self-defense and traditional karate. He has presented seminars on martial arts in Canada, Greece, New Zealand, and Peru.