Hilltoppers romp to 13-0 win over Tuxedo for Regional title 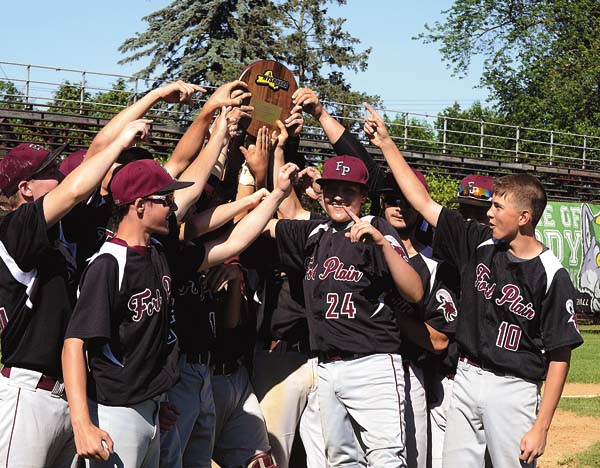 GLENS FALLS — The Fort Plain Hilltoppers are headed back to the state Final Four.

“We had to be aggressive and that is what we were,” Fort Plain coach Craig Phillips said. “Now we are going to the states again.”

Fort Plain (16-3) is slated to take on Section 10 champion Madrid-Waddington at 2 p.m. at the stadium. The winner will play the winner between Section 4 champion Deposit/Hancock and Section 6 champion Brocton for the Class D state championship at 10 a.m. Saturday at SUNY Binghamton.

Madrid-waddington advanced to the Final Four with an 11-1 victory over Section 7 champ Lake Placid. Deposit/Hancock moved into the semifinals with an 8-4 win over Section 3 champ Oriskany and Brockton earned their spot with a 5-1 win over Section 5’s Avoca Central. 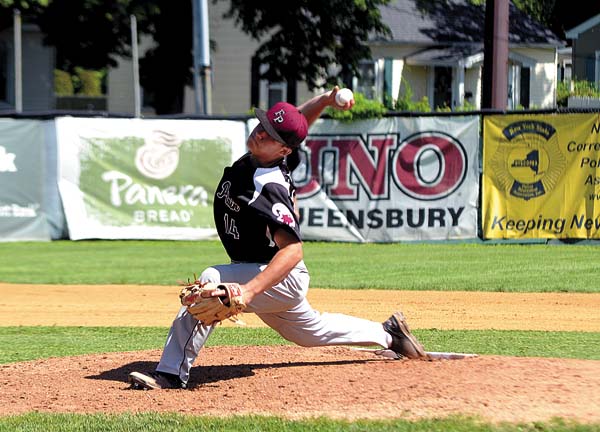 Fort Plain starting pitcher John Cortese delivers a pitch to the plate during the Regional Championship game against Section 9 champion Tuxedo Saturday at East Field in Glens Falls. Cortese struck out 10 of the 13 batters he faced to get the win. (The Leader-Herald/James A. Ellis)

The Hilltoppers’ starting pitcher John Cortese set the tone for the game in the top of the first inning, striking out the side on 13 pitches.

With the Tornadoes pitching ace Joe Castellanos coming off a big 17 strike out performance against Livingston Manor in the Section 9 title game, the Fort Plain hitters knew they had to be aggressive at the plate.

Jaxson Yacowenia opened the game with a single on the third pitch of the game and stole second. Bryce Thibodeau was hit by a pitch and both runners advanced on a passed ball.

Alert base running led to Fort Plain’s first run of the game.

Castellanos struck out Cortese but the Tornadoes’ catcher Lucas Maretzo could not hold the third strike. Cortese raced down the first baseline, drawing Maretzo’s throw. Yacowenia charged down the third baseline and beat the throw back to the plate to put Fort Plain up 1-0.

Troy Butler drew a two-out walk and stole second to put runners on second and third and Nate Buley plated both of them with a single to stake the Hilltoppers to a 3-0 lead.

Cortese continued to roll on the mound, allowing a walk to Ethan Cardona but again put three more strike outs in the book to hold the 3-0 advantage.

Zack Reid opened the bottom of the second with a triple into the left-field corner and later scored on a wild pitch to put Fort Plain up 4-0 after two innings of play.

After issuing a walk to Clayton Rost to open the top of the third, Cortese struck out the next two batters before Maretzo singled up the middle to put runners on first and second with two outs.

Cortese recovered to strike out Cameron Tomasovich to end the threat.

The Hilltoppers blew the game open in the bottom of the third, sending 13 batters to the plate and putting seven runs on the board.

Cortese opened the inning by reaching on a fielding errors and Butler moved him up with a sacrifice bunt. Buley struck out but a dropped third strike allowed him to reach base as Maretzo threw to third in an attempt to get Cortese, but Cortese held up and beat the play back to second to put runners on first and second with one out.

Josh Nellis followed with a single to load the bases.

The runs rolled across the plate as Castellanos walked Reid and Nare before hitting Yacowenia and Brady Fureno with pitches to go with a botched run-down on a bunt attempt to stake Fort Plain to an 8-0 lead.

Bryce Thibodeau greeted relief pitcher Julian Cepeda with a single to keep the inning going and build the lead to 10-0 before Buley draw a bases-loaded walk to score Fureno and give the Hilltoppers an 11-0 lead.

Cortese opened the top of the fourth with his 10th strike out before being lifted for Butler.

The freshman hurler picked up the final two outs of the inning with a pop out to right field and a strike out.

Fort Plain picked up two more runs in the bottom of the fourth to push the lead to 13-0 with Reid and Cortese getting hits and Jalen Hall reaching on a fielder’s choice and Nate Beam getting hit by a pitch.

Thibodeau came on in relief to get the final three outs of the game, on two ground outs and a game-ending strike out to advance the Hilltoppers to their second Final Four appearance in three years.

Cortese struck out 10 of the 13 batters he faced and combined with Butler and Thibodeau for the one-hit victory.

“I was hoping so. I was just trying to throw strikes,” Cortese said.

Reid connected for a triple and a single for Fort Plain, while Yacowenia, Thibodeau, Cortese, Buley and Nellis all singled.

Castellanos recorded three strike outs and hit five batters for the Tornadoes, whose lone hit of the game was Maretzo’s third-inning single.

“It will be nice to go there [NYSEG Stadium] but I hope that our players heads to get too big,” Cortese said. “I think we can do it we just need to keep our heads together and get in good practices this week.”