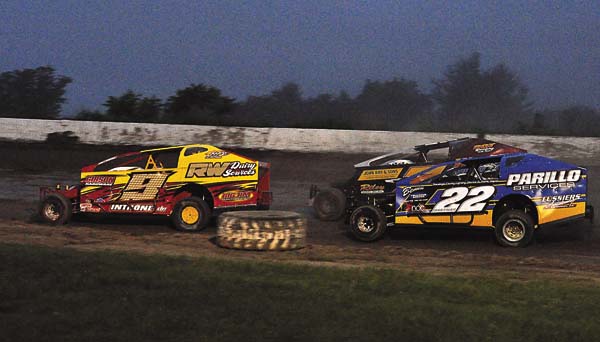 FULTONVILLE — After being rained out last Sunday, the Glen Ridge Motorsports Park roared back into action Sunday night with a full card of racing on Fan Appreciation Night.

The week away did not seem to affect David Constantino as he parked his DKM Cyclone-chassied crate modified in Victory Lane for the third straight time and for the 18th time of his career at The Ridge.

Jim Introne Jr. took full advantage of his front-row starting spot to show the 602 Crate Modified field the fast way around the speedway for the first 19 laps of the 30-lap feature.

Introne held off challenges first from Joe Orlando before Tim Hartman Jr. moved up to challenge the leader.

Constantino stalked the leaders from his fifth starting spot and made a big move around the top of turns one and two to pull alongside Hartman and continue past Introne into the lead exiting turn four with 10 laps to go.

Hartman moved into second a lap later leaving Introne to battle with Andrew Buff for the third spot.

Buff and Introne swapped spots on successive laps before contact between the two sent Buff spinning, while Introne maintained control and continued on.

Constantino withstood challenges from hartman on three restarts in the final five laps to notch his third win of the season.

Joslin and Devon Camenga battled on the front at the start of the 20-lap pro stock feature with Joslin leading the opening lap before Camenga took the point for the next two.

Joslin got back in front on lap four, bringing teammate Justin Knight and Rich Crane with him to the front.

Division points leader Luke Horning picked his way to the front from his 10th starting spot and settled into second behind Joslin with nine laps to go but could not find a way past the leader as Joslin stopped Horning’s streak of four wins in four weeks of racing with his first win of the season.

Racing returns next Sunday with a regular race card on tap for Hayes Trucking and Excavating Night.