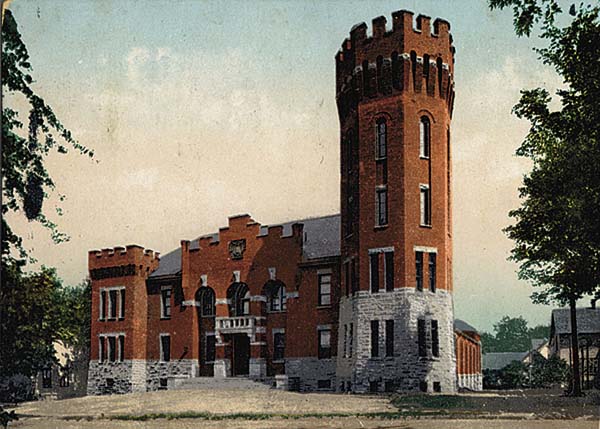 The Gloversville Armory is pictured on Washington Street.

At 87 Washington St. in Gloversville sets a medieval looking brick building that does not fit in with the typical houses in that part of the city (or any part of the city).

It is a castle-like structure that was built as a New York State Armory to house the Company G, 2nd Infantry Regiment Cavalry Unit at the turn of the 20th century.

It was designed by architect George L. Heins and consists of a two-story administration building, towers, horse stalls in the basement and an attached drill shed (gymnasium) with two balconies overlooking it.

With the urging of then New York State Governor Theodore Roosevelt, in 1903 state legislature appropriated $50,000 for a new armory to be built in Gloversville.

Fulton County was also required to contribute up to $20,000 to cover the cost of the lot, excavation and a sewer system connection. 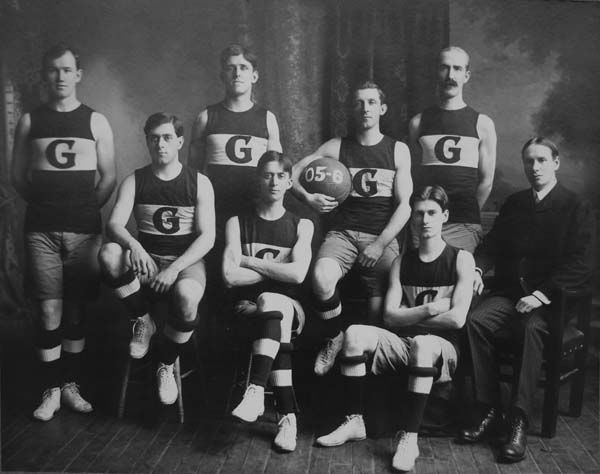 The site had to be at least 150′ wide and 200′ long, as well as prominently and conveniently located on ground that was solid (not near any marsh or running water). State military law provided that once built, annual maintenance expenses would be divided between the county (2/3) and the city of Gloversville (1/3). Construction took place throughout 1903 & 1904 and the Armory officially opened on May 10, 1905.

Through the years, different military regiments have been housed there. It was from this site, that many of our local boys left for the battlefields of France during WWI, for the European Theater in WWII, and multiple deployments to both Iraq and Afghanistan in more recent years.

While the initial military purpose for building the Armory has been served through the years since its inception, the drill shed (or gymnasium) has also served the entire community in many social capacities.

With its large capacity, a large local population and easy access for surrounding communities via the F., J. & G Rail Road (and its depot station a few blocks away on Fulton Street), the Armory gymnasium also became the center of the upstate New York sports scene during the winter months.

The gymnasium featured a basketball court, complete with bleachers and balcony seating to accommodate 1,500 spectators.

The first sports use of this new Armory was to house the Company G Basketball Team.

The game of basketball itself was in its infancy, having been laid out less than 15 years prior by James Naismith in 1891.

The players on this team were not members of the military contingent who occupied the Armory, but rather the best players in the upstate area who were paid for their services.

To cover the costs of paying their players and offering a monetary purse to cover the expenses of bringing in other teams to compete, a dinner dance with full orchestra would take place in conjunction with the game.

Due to the early success of basketball in Gloversville in the 1905-06 season, the Wachter brothers (Ed & Lew) of Troy, brought their services to Gloversville for the 1906-07 and 1907/08 seasons. They were the most sought-after players in the country, and with their high caliber of play, the Company G team management began booking games against the best professional teams in the northeast (the farthest reaches of the game at that time). Center Ed Wachter was considered the “Ty Cobb of turn of the century professional basketball” and was inducted into the Naismith Memorial Basketball Hall of Fame in 1961. These teams put Gloversville on the map as a national basketball powerhouse.

Eventually, a Gloversville team would compete professionally in the New York State League from 1912 through 1922 against teams from Schenectady, Cohoes, Troy, Utica, Kingston, Adams Mass., Pittsfield Mass. and Patterson N.J.

From the 1920s through the 1930s, the Armory would play host to some of the best traveling exhibition teams from around the country, including the Original Celtics, the New York Renaissance, the Detroit Clowns, the Newark Mules, and the Syracuse Reds. These games would routinely draw 1,000-1,500 spectators.

In November of 1946, a special welcome home event for the areas returning WWII soldiers was held at the Armory. In addition to a banquet, it was highlighted by a National Basketball League game between the Rochester Royals and the Chicago American Gears, featuring basketball immortal George Mikan as a rookie. A professional team would call the Armory home again in 1946/47 as part of the New York State Professional League.

The 1960s saw the Harlem Globetrotters make several visits to the Armory. These games were so popular that additional bleachers would be brought in for the games to allow 2,500 fans the opportunity to witness the world-famous exhibition team. Ironically, today’s fire codes allow no more than 600 at a time in that same area.

At the turn of the century, most local school districts did not have facilities with gyms big enough to utilize for high school games, thus the Armory served as the home courts for area varsity basketball contests.

These schools included Gloversville (up to the early 1930s), Johnstown (up to 1964), as well as Mayfield and Wheelerville (up to the 1950s). According to Gloversville resident Gene Satterlee, who played for Gloversville High School under Jack Kobuskie (1949-51) as part of his initial Reindeer Five (before they were Dragons), “even though we had our own gym at the Estee Middle School building, it was small. To be better prepared for away games on larger courts, we would sometimes practice at the Armory.”

Jack Sanford, another Gloversville High School player from that same era (both as High School and semi-professional) remembers it being a luxury to play on that court.

According to Sanford “it was a big court with lots of out of bounds area, so you did not run into walls after making a layup or chasing a ball out of bounds like on most local courts. The only drawback was that you would pick up tiny slivers if you went down on the floor.”

This was a sign of the age of the court, having initially been built nearly 50 years prior and overused.

The floor would be completely refurbished in 1955 (no more slivers) and semi-professional leagues, city leagues and CYO leagues would continue to utilize the court up through the 1970s.

The EXPO77 business show (civic event mentioned above) also added to the sports history of the venue with an appearance by former world heavyweight boxing champion Floyd Patterson, and aerial trampoline shows by Gloversville’s own Jumpin’ Jack and Lora Johnston.

Today, the Armory is still active as home to the Company C, 2nd Battalion 108th Infantry Division of the New York National Guard.

Approximately 100 active soldiers are attached to this unit and do offsite training at Fort Drum and West Point. It is one of approximately 50 surviving active Armory’s in New York State (down from 90 at its high point) and was placed on the National Register of Historic Places in 1995.

Unfortunately, as our local communities have become more developed, schools and local civic organizations have built their own sports and meeting facilities and such community events have now shifted to those types of venues. The basketball and general sports history of this site is similar in scope and significance to the early baseball history of A., J. & G. Park / Parkhurst Field just a few miles away that opened one year after the Armory in 1906.

The legendary teams, iconic players and historic events that took place at the Armory from 1905 through the 1970s will be the subjects of future articles.