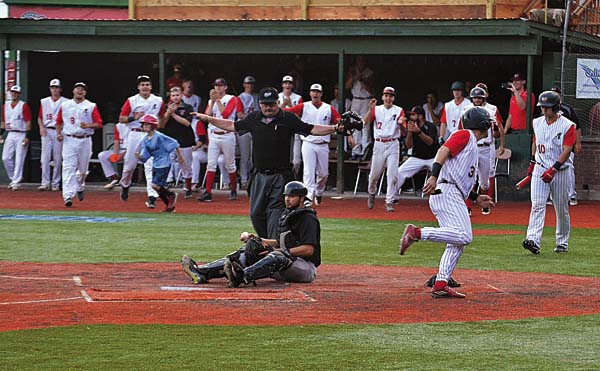 Saugerties catcher Jeff Palczewski looks to throw the ball back to the pitcher as the Mohawks exit the dugout to congratulate Eric Rivera (3) after he scored on a dropped third-strike play in the bottom of the fourth inning in the opening round of the Perfect Game Collegiate Baseball League playoffs Tuesday night at Shuttleworth Park in Amsterdam. (The Leader-Herald/James A. Ellis)

AMSTERDAM — The Amsterdam Mohawks advanced to the East Division Finals of the Perfect Game Collegiate Baseball League on Tuesday night by defeating the Saugerties Stallions 6-3 at Shuttleworth Park in the first round of the playoffs.

The Mohawks got three hits each from Dustin Skelton and Dan Maynard as well as two hits from Eric Rivera and Dylan Reynolds to lead them past the Stallions.

“They played well. Dustin Skelton played really well, got some big hits for us and I thought Maynard was incredible tonight,” Mohawks coach Keith Griffin said. “I thought he played so well.”

Saugerties got on the board first in the second inning. Tyler Kelder hit a double to left field and two batters later, Matt Forlow doubled to center bringing Kelder home for the 1-0 lead. 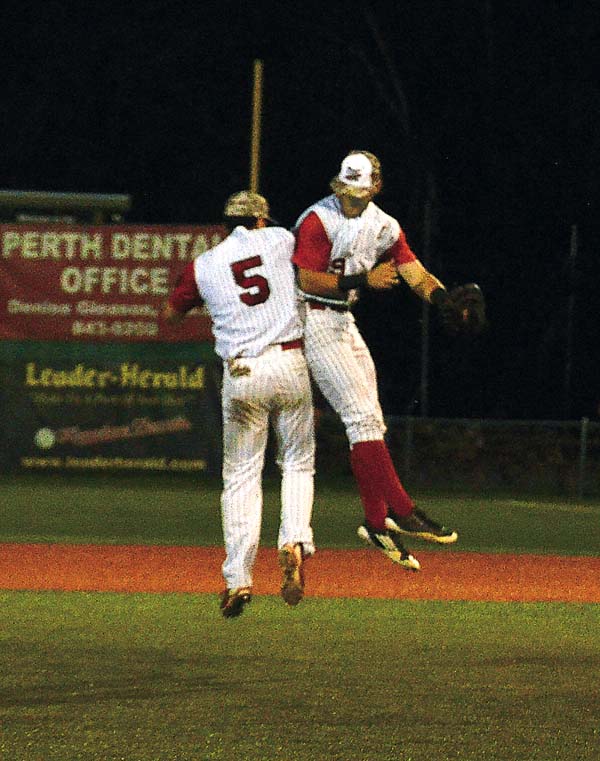 Amsterdam's John Valente (5) and Julian Gallup celebrate after the final out of the Mohawks 6-3 victory over Saugerties in the opening round of the Perfect Game Collegiate Baseball League playoffs Tuesday night at Shuttleworth Park in Amsterdam. (The Leader-Herald/James A. Ellis)

The Mohawks answered with a run to tie the game in the bottom half of the inning. Reynolds got on base when he smashed a double off the center field fence. Maynard pulled a shot down the third baseline for a double and brought Reynolds in to score.

Saugerties missed an opportunity to open up the game in the fourth inning. Kelder and Forlow each got base hits that gave the Stallions runners at first and second. Jesse Uttendorfer reached on an error to load the bases for the Stallions.

LaSorsa dug deep to get out of the inning by striking out Jeff Palczewski for the third out and left three runners stranded.

Amsterdam picked up two runs in the bottom of the fourth although a controversial call kept them from adding more. Rivera started the inning off with a double to center field and went to third when Reynolds got a base hit to right field and then went to second on the throw to home.

Next up was Maynard. On a dropped third strike, Maynard headed to first and as the Stallions catcher tried to tag him out, Rivera scored from third to give the Mohawks the lead. Reynolds went to third on the play. Maynard hit an RBI double off the center field wall that brought in Reynolds to make it a two-run lead.

With two outs and Maynard now on third, Julian Gallup hit what appeared to be a fair ball right over third base that would score Maynard, but the play was ruled a foul ball. The call immediately drew the ire of Griffin, who was coaching third, and he was ejected from the game. Maynard was left on third as the inning ended but the Mohawks had extended their lead to 3-1.

The Mohawks managed to put up another run in the sixth. Maynard singled to center field and then stole second base. Dustin Skelton hit a double deep off the center field wall and that brought in Maynard to make the score 4-1.

LaSorsa pitched very well through six innings but the Stallions were able to pick up a couple runs in the seventh. Uttendorfer drew a walk and then Andrew Taft was thrown out at first for the second out and Uttendorfer was on second. Matt Feinstein smashed a double to left that scored Uttendorfer and then Luke Pettersen got a base hit up the middle that drove in Feinstein to bring the Stallions back to within one of the Mohawks. LaSorsa was relieved by Morgan McSweeney who came in and the inning ended when Reynolds made a diving catch down the left field line for the third out.

“Joe pitched really well and Morgan threw well after that,” Griffin said. “We probably should have gotten Joe out a little bit earlier. We knew he was on fumes, but we were just trying to get the last out. He really threw the ball well.”

Amsterdam added two more runs to put the game away in the bottom of the eighth. Jake Mueller led off with a walk and then stole second base. Rivera hit a three-two pitch deep to center field for a triple that scored Mueller.

With one out, Maynard ripped a double to center field and Rivera scored to make the score 6-3.

McSweeney was able to shut down Saugerties in the top of the ninth inning to give the Mohawks the win and advance them to the East Division Finals.

The division finals will be a best-of-three series against the Mohawk Valley DiamondDawgs with the first game today at Shuttleworth Park at 6:35 p.m.

Unfortunately for the Mohawks, they will have to finish the season without Griffin as he has to return to Florida first thing in the morning. The school district that he works in starts classes this week.

“I’m turning it over to a good coaching staff,” Griffin said. “They know what they’re doing and we’ll see what happens the rest of the way.”

Taking over the team will be assistant coach Doug O’Brey and the rest of the Mohawks staff.