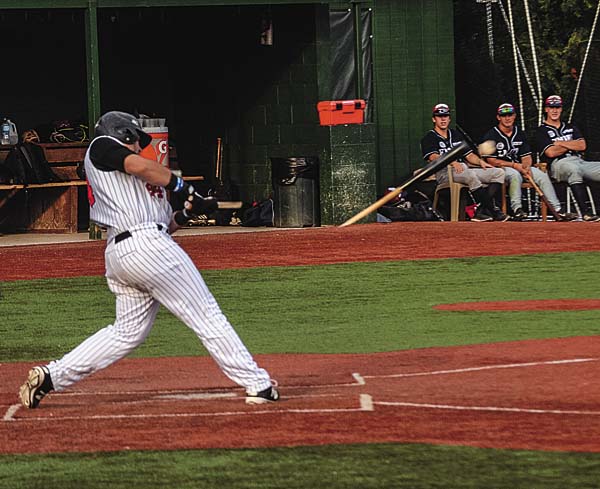 Amsterdam's T.J. Collett shatters his bat as he singles up the middle during the first inning of Monday's Perfect Game Collegiate Baseball League game against the Elmira Pioneers at Shuttleworth Park in Amsterdam. (The Leader-Herald/James A. Ellis)

AMSTERDAM — After hammering out a 22-12 victory over the Adirondack Trail Blazers on Sunday, the Amsterdam Mohawks returned home and continued to swing a hot bat.

Facing the Elmira Pioneers for the only time in the regular season, the Mohawks erased an early five-run deficit to pull away to an 11-8 Perfect Game Collegiate Baseball League victory over the Pioneers Monday at Shuttleworth Park.

“We needed to come out and play well and we did,” Amsterdam coach Keith Griffin said about playing the day after putting up 22 runs. “We have played a lot of baseball. We played late Saturday night and started early yesterday. It will be good to have a day off [today]. We will see where this takes us. This is a team that is continually getting better and continually trying to evolve and do a better job. It never ends. It is a progressive process from the first pitch to the last pitch of the season and that is what we are trying to do.”

Monday’s victory marks the seventh-straight win for the Mohawks and 19th in their last 20 games.

Elmira (17-16) put the Mohawks in a hole early with a five-run burst in the top of the second that was highlighted by Marshal Gilbert’s grand slam home run.

The advantage didn’t last long for the Pioneers as Amsterdam answered with five runs in the bottom of the second.

Eric Rivera opened the rally with a double before Will Holland drew a two-out walk and Rivera scored when Chris Hamilton’s single was mishandled in center field. John Valente singled to score Holland and Hamilton crossed the plate on a wild pitch to put the score at 5-3.

Jake Mueller and T.J. Collett drew back-to-back walks to load the bases. Liam Wilson picked up a pair of RBIs with his single to score Valente and Mueller and tie the game at five apiece.

Elliott Anderson came on in relief of starter Holden White and sat the Pioneers down in order in the top of the third.

Dan Maynard gave Amsterdam its first lead of the game with a lead, sending a 2-1 pitcher over the left-field fence for a home run and 6-5 Mohawks lead.

The Pioneers battled back and tied the game in the top of the fifth.

Colton Evans and Gilbert led off the inning with back-to-back walks before Evans advanced to third as the Mohawks turned a double play off the bat of Connor Grammes. Evans scrambled home with the game-tying run on a wild pitch and put the score at 6-6.

Again the Mohawks found a way to retake the lead in the bottom of the inning. Rivera worked his way on with a lead-off walk, stole second and third before scoring on Maynard’s RBI single for a 7-6 advantage.

Amsterdam put together a decisive sixth inning, pushing three runs across the plate.

Valente drew a lead-off walk and Jake Mueller followed with a single. Both advanced with stolen bases as Wilson singled to load the bases with one out.

Rivera grounded out but picked up an RBI and advanced the runners into position to score when Dylan Reynolds grounder was misplayed, putting the score at 10-6.

Elmira got two of the runs back in the top of the seventh when Evans reached on a fielder’s choice following a walk to Brett Rodriguez.

Evans moved to second on a wild pitch and came around to score on a fielding error when Rivera, the Mohawks’ centerfielder, overran a ball hit by Gilbert, who advanced to third on the play. Grammes scored Gilbert with his grounder to the right side to cut Amsterdam’s lead to 10-8.

Amsterdam got a run back in the bottom of the seventh when Valente drew a two-out walk, stole second and advanced to third on a throwing error on the play.

Mueller also drew a walk and broke toward second in a steal attempt, drawing the throw down to second, allowing Mueller to break for home and beat the throw to the plate for a stolen base and an 11-8 advantage.

The Pioneers put together a final threat in the top of the ninth when Rodriguez and Evans opened the inning with back-to-back singles, before reliever Carter Knapek struck out Gilbert and enticed Grammes into a game-ending 6-4-3 double play.

“We were told they swing the bat really well and they really did,” Griffin said. “They were in the same position as we were bullpen-wise. They threw their bullpen guys same as we did and that is why you saw the big numbers. That was the game that was dealt to us tonight and I thought the guys responded really well.”

Valente led the Mohawks with a 3-for-5 performance with an RBI and three runs scored, while Maynard went 2-for-4 with two RBI’s and a home run.

Evans went 2-for-3 with an RBI and three runs scored to lead the Pioneers.

“We knew we were going to have a bullpen game to give our starters back on normal rest with an off day tomorrow,” Griffin said. “We got some big hits then Elliott [Anderson] went in there and really gave us a chance, shutting them down for a little while. Then they scored one on him, so we went to [Brandon] Reitz and he has been good for us all the way. We got a little bit of a break on that line drive there at the end to finish the game.”

Following a day off today, the Mohawks (25-7) travel to play the Oneonta Outlaws Wednesday before returning to Shuttleworth Park on Thursday to face the Newark Pilots and the Albany Dutchmen on Friday.