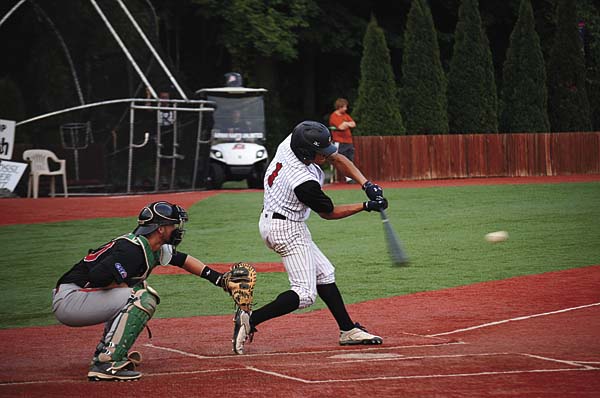 Amsterdam's Will Holland connects for an RBI single in the Mohawks' four-run fifth inning against the Glens Falls Dragons in Perfect Game Collegiate Baseball League action Thursday at Shuttleworth Park. (The Leader-Herald/James A. Ellis)

AMSTERDAM — The Amsterdam Mohawks needed all of a 10-run advantage they built early in Thursday’s Perfect Game Collegiate Baseball League game with the Glens Falls Dragons.

The Mohawks jumped out to an 11-1 lead after five innings of play but Glens Falls battled back to put the tying run on base with two outs. Brandon Reitz came on to get the Dragons’ Brandon Torres to fly out to center and save the 11-10 victory and extend the Mohawks home win-streak to eight games.

Amsterdam (21-7) broke out to a two-run lead in the first inning when Jake Mueller tripled and scored on Eric Rivera’s double. Liam Wilson followed with a single to score Wilson and give the Mohawks a quick 2-0 lead.

The Mohawks tacked on two more runs in the bottom of the second when Will Holland singled and Dylan Reynolds doubled. Both Holland and Reynolds scored on Dan Maynard’s single before Maynard was tagged out on the play trying to stretch the hit to a double.

Rivera accounted for the Amsterdam scoring in the bottom of the third with a solo home run.

Glens Falls got a run back in the top of the fourth when Brian Uliana singled and went to second on a fielding error. Dan Lowndes drove in Uliana with a grounder to the right side to cut the lead to 5-1.

Amsterdam grew its lead with two runs in the bottom of the fourth and exploded for four more in the bottom of the fifth. With the bases loaded, Holland drove in Wilson before Reynolds plated Matt Gorski and John Valente picked up a pair of RBIs with a single to score Anthony Gonnella and Holland for an 11-1 advantage.

The Dragons began their come-back bid in the top of the sixth when Uliana and Mark Powell singled and Anthony Vaglica plated Uliana with a single. Miles Moore kept the rally alive with his single to score Powell before Dalton Ney singled to load the bases with one out. Jared Morello doubled to score Vaglica and Moore to cut the Mohawks lead to 11-5.

Uliana reached base after being hit by a pitch before Powell singled and Dan Lowndes walked to load the bases. Uliana scored on a fielding error on a ground ball off Vaglica’s bat. Powell scored on a grounder by Moore before Lowndes scored on Vaglica’s ground out. Brian Wasilewski doubled to score Dalton Ney and pull the Dragons to within a run.

However, Reitz came on for Carter Knapek and got Torres to fly out for the final out of the game and keep a 2 1/2 game lead over Mohawk Valley in the PGCBL East standings.

The Mohawks will be back at Shuttleworth Park tonight to take on the Albany Dutchmen, with game time slated for 6:35 PM.

Albany (17-10) is coming off a double-header victory over the Oneonta Outlaws and are 3 1/2 games back from the Mohawks in the East standings.