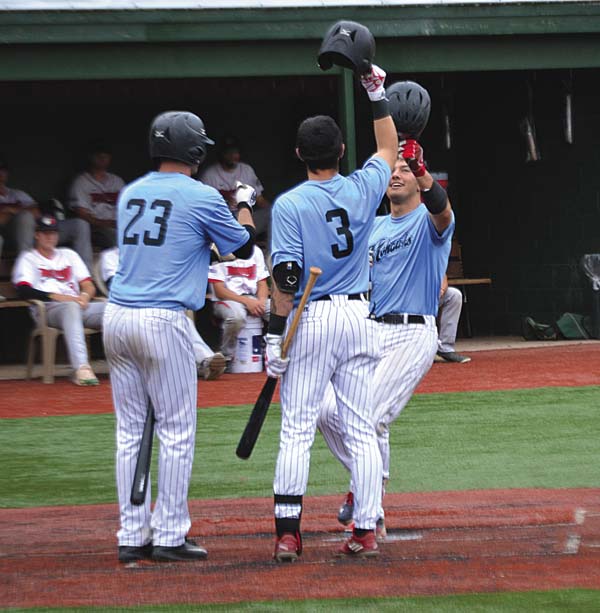 AMSTERDAM — After a Tuesday night shutout of the Saugerties Stallions, Amsterdam Mohawks coach Keith Griffin said, “What we need is pitching like tonight. It was good pitching and it was good to see.”

On Wednesday, the Mohawks pitchers combined for a shutout for the second straight night at Shuttleworth Park,

This time, it was against the Glens Falls Dragons in an 8-0 Perfect Game Collegiate Baseball League East Division game.

“It was another really good effort again tonight,”Griffin said. “We never really got in trouble.”

The Amsterdam pitchers had plenty of offensive support as the Mohawks hit three home runs on the night.

The first came in the first inning.

Leadoff hitter John Valente took the second pitch he saw deep over the left field wall to put the Mohawks up 1- 0.

In the third inning, it was Chris Hamilton who hit a solo shot over the right field wall to give the Mohawks a 2 -0 lead.

The Dragons threatened in the fourth inning. Brian Uliana hit a single to right field and then Phoenix Hernandez dropped a base hit into shallow center to give the Dragons runners at first and second. Brandon Torres hit the ball sharply to third where Valente scooped it up, stepped on third and then threw to first for a double play that dashed the Dragons hopes.

Both teams cruised through the middle innings. but in the bottom of the seventh the Mohawks opened the game up.

Dan Maynard walked and then Dalton Skelton, new to the team this week, was hit by a pitch and Amsterdam had runners at first and second. After the Mohawks successfully pulled a double steal, Julian Gallup walked to load the bases. With two outs, Jake Mueller hit a shot to right field that brought in Maynard. Skelton scored when the throw to home plate was late. The Dragons tried to throw out Mueller at second but he was safe under the tag and, with that, Gallup rounded third and scored the third run. “We got home runs from Valente and Hamilton but Mueller’s hit really opened it up for us,” Griffin said.

The Mohawks added on three more runs in the eighth. Dylan Reynolds led off with a double to right field and Maynard walked, giving the Mohawks two more base runners.

Next up was newcomer Dalton Skelton.

Skelton hit the first pitch, high and deep, to right field where it just cleared the fence for a three-run home run, extending the Amsterdam lead to 8-0.

Mueller went 1-for-4 with 2 RBIs and Hamilton (Stony Brook) went 2-for-4 with a home run for the Mohawks.

Brian Uliana went 1-for-4 to lead Glens Falls, while Phoenix Hernandez had the only other hit.

The Mohawks (32-12 overall) will travel to Glens Falls (15-30) today before returning to Amsterdam for their final regular-season home game against the Adirondack Trail Blazers on Friday.