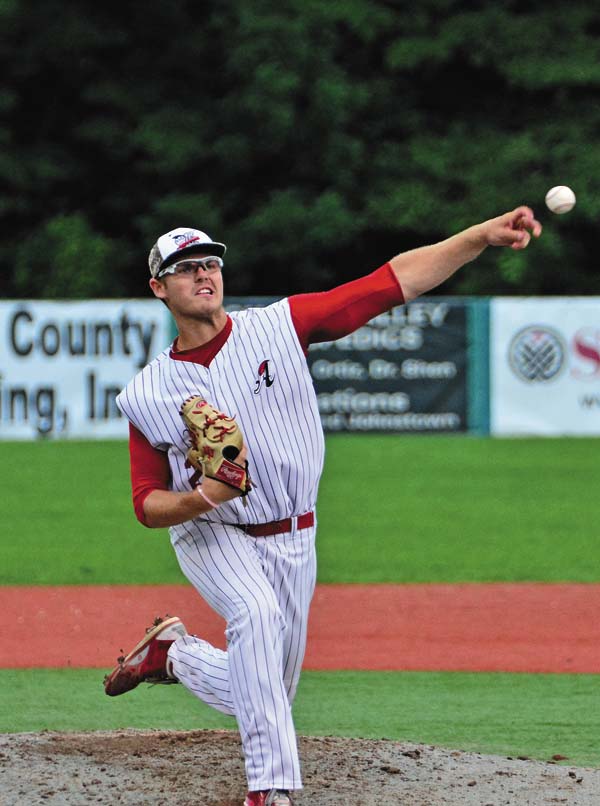 AMSTERDAM — With the playoffs just one week away, the Amsterdam Mohawks were looking to turn things around after consecutive losses to Saugerties and Mohawk Valley.

The Mohawks hosted the Saugerties Stallions in a Perfect Game Collegiate Baseball League game Tuesday at Shuttleworth Park and got back on the winning track with a 4-0 win.

Amsterdam coach Keith Griffin was pleased with his team’s performance.

“It was a great game tonight. We really played well,” he said after the game. “I thought we ran the bases well and played tremendous defense,” Griffin said.

The victory was largely due to an outstanding effort by the Mohawks’ pitching staff. Andrew Saalfrank pitched seven innings, giving up only two hits, no runs and three walks while striking out seven.

The teams held each other in check through two-and-a-half innings. In the bottom of the third the Mohawks got on the board. Julian Gallup led off the inning with a double to center field. Robbie Spagnola laid down a sacrifice bunt to move Gallup to third. Three batters later, Dylan Reynolds singled up the middle to drive in Gallup and give the Mohawks a 1-0 lead.

Saugerties had runners on first and second in the fourth inning but Saalfrank got Tyler Kelder to hit into an inning-ending double play.

In the bottom of the fourth, Amsterdam put up three runs. Anthony Gonnella walked and Dan Maynard hit a chopper over third base to put runners at first and second with no outs. Chris Hamilton put down a sacrifice bunt to move the runners to second and third. With one out, Gallup drove the ball deep to center field for a double and drove in two runs. Gallup would then score when John Valente hit a single over first base giving the Mohawks a 4-0 lead after four innings.

“We had a couple of big hits by Gallup to get us off and running and then we laid down some good bunts,” Griffin said.

Saalfrank kept the Stallions off the bases until the seventh inning when he gave up a walk to Clay Simmons with one out. The next at bat brought about the play of the night. Kelder hit a line drive down the first baseline. Gallup made a leaping catch and while in the air, he made a sweeping tag on Simmons to record the unassisted double play and get the Mohawks out of the inning. “That was a big play at the right time,” Griffin said.

In the eighth inning, Griffin went to his bullpen and brought in Carter Knapek who put out all three batters he faced. In the ninth, it was Nick Chiseri who came in and got the final three outs. “We got a good job from Knapek and a good job from Chiseri,” Griffin said.

Gallup (Niagara), and Amsterdam native, went 2-for-4 with two doubles, two RBIs and two runs scored. Valente finished the game 2-for-5 for the Mohawks.

Matt Forlow (Manhattan) went 1-for-4 to lead Saugerties, while Luke Pettersen had the only other hit.

Looking ahead to the playoffs, Griffin is aware that the Mohawks have lost some players to injuries but he is focusing on the players at hand. “We can all moan about what players we don’t have but it’s about the players we do have,” he said. “What we did have tonight was real good play from John (Valente). Maynard was good behind the plate and we got a bunch of good hits from people.”

Amsterdam (30-12 overall) will be back at Shuttleworth Park today to host the Glens Falls Dragons (15-28).

Saugerties (18-22), who could potentially be a first-round opponent for the Mohawks in the playoffs, will host the Oneonta Outlaws today.