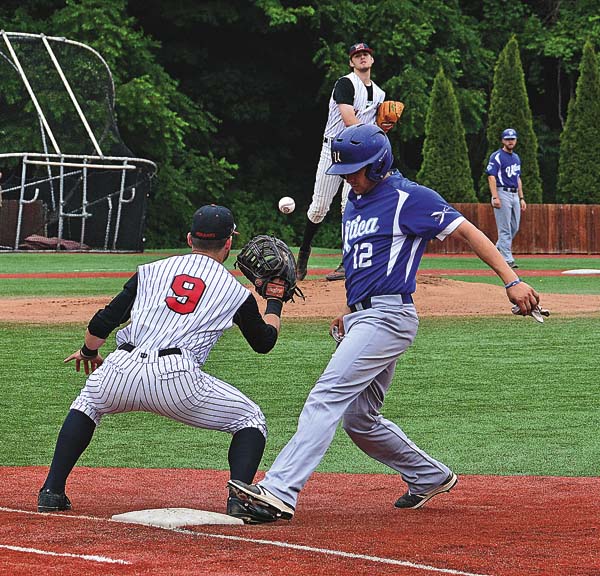 Amsterdam Mohawks’ first baseman Julian Gallup (9) waits for the throw from pitcher Ben Anderson on a pick off attempt as the Utica Blue Sox’s Kyle Norman scrambles back to first during the first inning of the opening game of Thursday’s Perfect Game Collegiate Baseball League doublheader at Shuttleworth Park. (The Leader-Herald/Bill trojan)

AMSTERDAM — A sweep of the Utica Blue Sox would have given Amsterdam Mohawks head coach his 1,000th career win but inconsistent play prevented any celebration by the Amsterdam players and fans.

The Mohawks ended the night with a split of the doubleheader with the Blue Sox taking the opening game 4-3 and the Mohawks coming back to claim the nightcap, 11-3 Thursday night at Shuttleworth Park.

“We didn’t have a very good offensive approach,” Griffin said after the opening game. “We didn’t play well enough to win. They [Utica] did and good for them.”

In the first game Utica put together a solid sixth inning to take the lead.

After losing the lead to the Mohawks in the fourth inning the Blue Sox came up with three runs in the sixth and were able to close out the seven inning game with a solid performance from starting pitcher Louie Varland, (Concordia-St. Paul).

Utica jumped out to an early lead in the second inning. Zane Harris (Wright State) took a 1-0 pitch from Ben Anderson (Binghamton) and drove it deep to right field where it just barely stayed fair to give the Blue Sox a 1-0 lead.

Varland controlled the Mohawks hitters through the first three innings, putting out all nine batters including five strike outs.

The Mohawks picked up two runs on three hits to take the lead in the bottom of the fourth.

Jake Mueller (Wake Forest) started things off when he singled with a hard shot right up the middle and then stole second. Eric River (Florida Atlantic) drilled a hit that got through at third, scoring Mueller and tying the game. Dylan Reynolds (Fairfield) hit a double to right field that was bobbled and allowed Rivera to score all the way from first and gave Amsterdam a 2-1 lead.

The Mohawks extended their lead with a run in the fifth.

Dustin Skelton (Miss. State) walked and Julian Gallup (Niagara) laid down a bunt and beat the throw to first. Chris Hamilton (Stony Brook) put down a sacrifice bunt that moved the runners to second and third before John Valente (St. Johns), who had another outstanding night playing third base, drove a single to left field scoring Skelton to put the Mohawks up by two runs.

The top of the sixth saw the Blue Sox rally to take the lead.

With one out, Harris walked and Devon Garcia (Ohio) walked, giving Utica the tying run at first.

Chris Skermo (Lackawanna) hit a short chopper but the throw to first was too high allowing Harris to score from second. With Evan Lee (Ashland) at bat, Garcia scored on a wild pitch to tie the game at three and Skermo went to third representing the go ahead run.

After Lee popped out to short for the second out, Matthew McDermott (William and Mary) hit a line drive up the middle for a base hit that scored Skermo and gave the Blue Sox a 4-3 lead.

Amsterdam threatened with base runners in the bottom of the sixth but they were unable to bring them home.

With one out, Will Holland (Auburn) singled to left and Anthony Gonnella (South Florida) hit to right field giving the Mohawks runners at first and third. Skelton struck out and Gonnella was thrown out stealing second to end the inning with the Mohawks still trailing by one.

Griffin said, “We should have won but we didn’t play well enough to win. Credit Utica, they did a good job”.

Nick Chiseri (UConn) came in to pitch in the final inning and retired all three Utica batters. Amsterdam had another shot at scoring but their effort was ended when Hamilton got caught in a rundown trying to steal second with two outs.

In spite of the disappointing loss Coach Griffin remains optimistic. “Hey look, we’ve played really well. We’ve won 23 or 24 out of 26 or 27 so if that happens some games, it happens.”

In Game 2, the Blue Sox picked up where they left off, scoring three runs in the top of the first, highlighted by an RBI dobule by Devon Garcia for a quick 3-0 lead.

That would be the end of their scoring.

The Mohawks broke the game open with an eight-run fifth inning.

Dylan Reynolds sparked the big inning with an RBI triple along with RBI singles from Gonnella, Mueller and Dan Maynard.

Amsterdam will look to get Coach Griffin his milestone victory tonight when the Mohawks travel to Glens Falls for a doubleheader at East Field starting at 5 p.m.