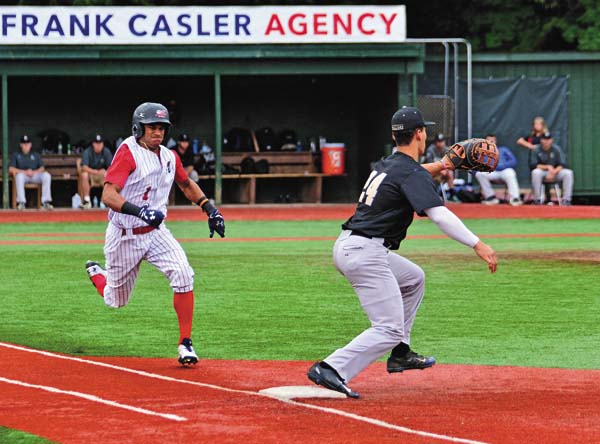 AMSTERDAM — After losing to the Amsterdam Mohawks, 11-5 on Thursday night, the Saugerties Stallions traveled to Shuttleworth Park hoping to get back on the winning track.

Getting multiple hits from four different players, the Stallions upended the Mohawks by a score of 7-2 on Friday night in a Perfect Game Collegiate Baseball League contest at Shuttleworth Park.

Saugerties broke through in the third inning scoring three runs. Patrick Lagravinese started the inning with a single to left field and John Tuccilo followed with a single to right. Nick Campana reached on an error to load the bases. Luke Pettersen hit a shot to left and drove in Lagravinese for the first run of the game. Tuccilo scored on a wild pitch and Campana moved to third base. Jack Gonzalez got out at first but Campana came home to give the Stallions a 3-0 lead.

The Stallions added another run in the fourth inning when Austin Powell came home on a hit by Pettersen. The Mohawks couldn’t turn the double play that would have gotten them out of the inning and found themselves trailing 4-0.

The Mohawks quieted the Saugerties hitters with 1-2-3 innings in the fifth and sixth. In the seventh inning the Stallions got their bats going again. Pettersen walked and Matt Feinstein hit a short single to right field to put runners at first and second. Gonzalez got a base hit to right and that scored Pettersen from second. Nicholas Teitter hit a sacrifice fly that brought Feinstein home to make the score 6-0.

In the bottom of the seventh Amsterdam was looking for any way possible to get some runs on the board and they found a couple by way of walks. Anthony Gonnella smacked a double off the right field wall and stole third base. Danny Coleman drew a walk and then stole second on a dropped ball by the catcher. Cameron Collett walked to load the bases and Julian Gallup took ball four to bring home Gonnella and put the Mohawks on the board. With Coleman on third Will Holland hit a sacrifice fly to center to bring Coleman home for the second run. Amsterdam trailed by five after the seventh inning.

The Stallions didn’t flinch as they answered with another run in the top of the eighth. Lagravinese got on base when the throw to first was too high and moved to second when Tuccilo laid down a sacrifice bunt. Campana hit a shot deep off the left field wall brining home Lagravinese.

Amsterdam was unable to respond with any more runs in the eighth and ninth innings as the Stallions held on for the 7-2 win.

Amsterdam (6-4 overall) is scheduled to travel to Geneva today for a 7:05 p.m. contest.