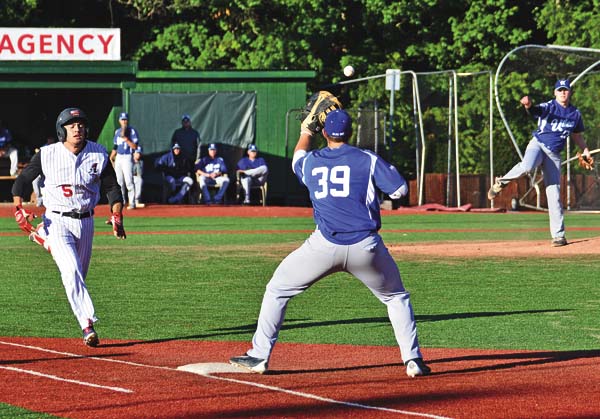 AMSTERDAM — After extending their win streak to nine games with a 7-4 win over the Utica Blue Sox Monday night the Amsterdam Mohawks hosted Utica in a Perfect Game Collegiate Baseball League contest Tuesday at Shuttleworth Park in an effort to extend that streak.

By virtue of Eric Rivera’s walk-off home run with two outs in the bottom of the 13th inning, the Mohawks win streak is now at 10.

The Mohawks also got help from relief pitcher Brandon Reitz. Reitz came on in the eighth inning and shut down the Blue Sox by pitching six scoreless innings while striking out 12 of the 18 batters he faced.

Utica got on the board first in the first inning. With two outs, Cole Pursell hit a solo home run over the left field fence to give the Blue Sox a 1-0 lead. The Mohawks loaded the bases in the bottom of the first, but were unable to bring a runner home.

The Blue Sox scored again in the third. Matthew McDermott got things going with a single down the right field line and then moved to second on a single by Kyle Norman. With runners at first and second and two outs, Pursell hit to deep center field allowing McDermott to score from second and make the score 2-0.

Utica doubled their score by adding on two more runs in the fifth inning. Norman got on with a single to left and Taylor Olmstead followed with a hit of his own. Zane Harris drove the ball to center for an RBI single scoring Norman from second and Olmstead moved to second. A wild pitch put the base runners on second and third when Nathan Thyssen hit the ball to second, but Olmstead was able to beat the throw to home and gave the Blue Sox a 4-0 lead going into the bottom half of the inning.

The Mohawks started to come to life as they rallied to score three runs in the fifth. Jake Mueller walked and then TJ Collett smacked a single to right-center field and Mueller went to third. A walk to Liam Wilson loaded the bases for the Mohawks. Mueller scored the first run for Amsterdam when he came home on a wild pitch that moved Collett to third and Wilson to second. Will Holland hit a ground ball that got past short stop and Collett scored. Wilson scored on another wild pitch and the Mohawks only trailed by one after five innings.

The bottom of the sixth inning saw the Mohawks take their first lead of the game, scoring three more runs. Julian Gallup was hit by a pitch and John Valente drew a walk putting runners on first and second. Gallup and Valente pulled off a double steal with nobody out. Gallup scored to tie the game at four when Mueller hit to second and was thrown out at first. Collett then hit an RBI single to center field that scored Valente giving the Amsterdam the lead. Up next was Wilson who doubled up the middle and Collett scored from second to give Amsterdam a 6-4 lead heading into the seventh inning.

Utica quickly responded and regained the lead with three runs in the seventh. Pursell got his third hit of the game with a single to center field and ended up on second after Harris was walked. The next batter was Thyssen and he took the second pitch deep over the left field wall for a three run homer that put the Blue Sox up 7-6.

The Mohawks desperately needed a run to tie the game and they got it in the bottom of the ninth. Matt Gorski became the tying run when he doubled down the right field line and then advanced to third on a passed ball. Dylan Reynolds drove in Gorski and tied the game with a single to right. Eric Rivera entered the game as a pinch runner for Reynolds but was thrown out trying to steal second. A strikeout ended the inning for Amsterdam leaving the score tied at seven.

The 10th, 11th and 12th innings were highlighted by great defensive plays and an impressive pitching performance by Reitz, striking out the side in the 12th inning as part of his 12 strikeout effort.

Amsterdam got the winning run on base in the bottom of the thirteenth when Gorski got hit by a pitch bringing Rivera to the plate next. Gorski was thrown out trying to steal second base for the second out and that left Rivera all alone on the diamond. With the count two and two, Rivera blasted the ball over the left field wall for the walk off home run, giving the Mohawks a 8-7 win over the Blue Sox and a 10-game winning streak.

The Mohawks (16-6 overall) will get a well-deserved rest today before returning to Shuttleworth Park on Thursday to take on the Oneonta Outlaws (6-15 overall).