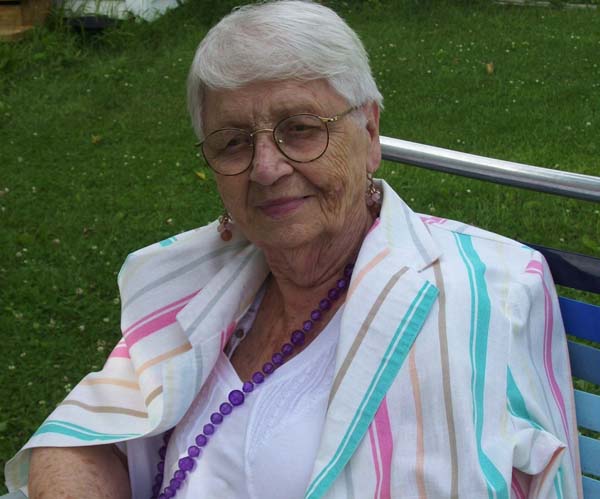 She was born April 5, 1927, in Donja Dubica, Yugoslavia, the daughter of the late Jovo and Ljubica Kazr Jankovic. At the age of 16 she was taken from her family and placed in a work camp during the height of World War II. With the help of a German soldier she escaped the labor camp and ended up in Czechoslovakia, where she cooked in her host families restaurant until the end of the war.

She never returned to Yugoslavia. She instead met the love of her life in Bitburg Germany in 1954, Staff Sergeant Donald N. Bruce of the United States Air Force. They relocated to San Antonio, Texas and ultimately resided in Gloversville, New York where they enjoyed 40 wonderful years of marriage until Donald’s untimely passing in 1994.

Marie was a homemaker, a collector, skilled cook, avid reader and devoted New York Yankees fan. Above all, she enjoyed being in the company of loved ones. Marie’s life was a living example of perseverance and strength that was understood by all who had the pleasure of knowing her. And as of this writing, it is still undetermined how many pairs of shoes she owned.

Marie is survived by her three sons and their wives, Robert and Susan Bruce, Leo and Wanda Bruce, Michael and Lorrie Bruce; as well as her two daughters and their husbands, Martha and Rick Smullens, Marie Sisario; her nine grandchildren, Zachary, Jared, Joshua, Jonathan, Trevor, Kameron, Sydney, Connor, and Donald; her two great-grandchildren, Lenin and Richie. Marie was predeceased by her parents; her husband Donald; her two brothers, Rudolph and Michael; a son, Richard Bruce; and son-in-law, Barney Sisario.

The family would like to give special thanks to the excellent staff at both the Nathan Littauer Nursing Home and her Cardiologist Dr. Holmes.

In keeping with Marie’s wishes. there will be no formal calling hours of funeral at this time.

Interment will take place in the spring at North Bush Cemetery, Gloversville at a date to be determined.

Memorial contributions may be made in lieu of flowers to the American Heart Association at 4 Atrium Drive 100, Albany, NY 12205 or to a charity of your choice in Marie’s name.

Online condolences may be made to the Bruce family at www.brbsfuneral.com.