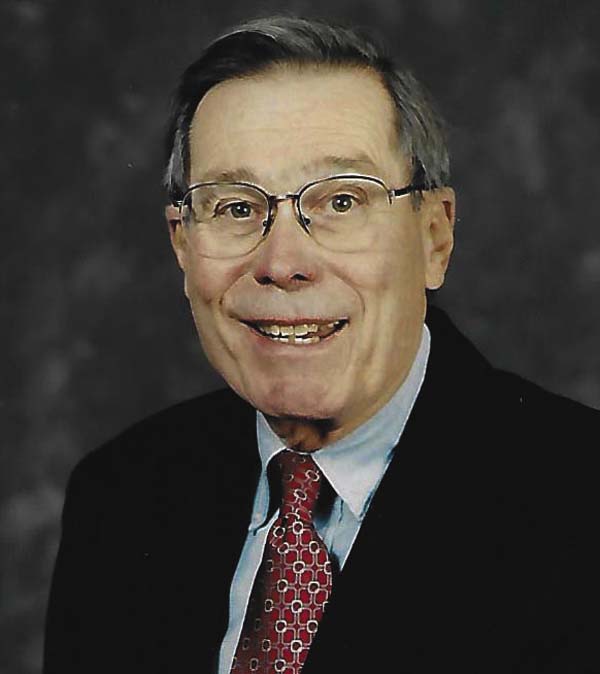 James W. (Jim) Holtzworth, of Saratoga Springs, NY, died peacefully at the Home of the Good Shepherd, Saratoga, on Saturday, December 16. Jim was born in Pittsburgh, PA to Clarence Hugo and Ruth Stuart Holtzworth, where he was raised until he moved with his family to Baltimore, MD. He graduated high school from Friends School of Baltimore (1948) and graduated with honors in history from Johns Hopkins University (1952). He received his J.D. from Harvard Law School (1955) where he met his wife, Elizabeth (Liz) Wood Holtzworth, who was a student at Radcliffe College. They met at the soda counter of the former Shepard Pharmacy, which is now a Starbucks that Jim loved to frequent. Jim and Liz married on December 26, 1955, and then lived in Karlsruhe, Germany while Jim served in the U.S. Army Signal Corps as a cryptographer with top-secret clearance.

Upon return to the U.S., Jim commenced his lifelong law career, practicing in the Baltimore area for 12 years, including as an attorney for the New York, New Haven, & Hartford Railroad Company. Jim had a passion for trains that endured through his last days, as he delighted in viewing the elaborate model railroad recently installed at the Home of the Good Shepherd. He also practiced law at the Commercial Credit Company and the Weinberg & Green law firm.

In 1969, Jim moved to Gloversville, New York, to join Liz’s family law firm, becoming a partner in what was then Wood, Wood, & Holtzworth (now the Wood, Seward, & McGuire law firm). Jim immediately took to small town life and to general law practice. He used his legal skills to contribute to the local community. While maintaining an active private law practice throughout his years in Gloversville, he also served as the Gloversville City Assistant Attorney (1985-1989) and then as City Attorney (1998-2001). He served as the Gloversville City Court Judge, and in 1989 was appointed by Governor Mario Cuomo to serve as the Fulton County Family Court Judge. He eventually retired from law practice in 2005.

Jim was always an advocate for justice, and both established and actively served organizations based upon his commitment to the underprivileged. While in Baltimore, he founded the Remedial Reading and Arithmetic Tutorial Program for Inner-city Children in 1966, and served as a tutor for that program. He was elected to the Gloversville Enlarged School District Board (1972-1975) and in 1979 was one of the founders of the Fulton and Montgomery Counties Legal Aid Society. Also in Gloversville, he served on the city’s YMCA Board of Directors and was a member of the Board of Planned Parenthood of Schenectady. Even after retirement, he provided pro bono legal aid through NY State Legal Services. He was always involved in politics and worked tirelessly for a variety of local, state, and presidential candidates. At the time of his death, he was appalled by the current state of political affairs in America.

Jim loved life. He approached it with gusto and enthusiasm. He was an avid “jogger” and took full advantage of the outdoor activities that upstate NY had to offer, including sailing, swimming, and learning to ski in his 40s. He loved to travel throughout the U.S. and Europe, indulging his passion for history, art, and architecture. His avid curiosity led him to pepper unsuspecting docents with questions in a ritual the family dubbed “stump the tour guide.” His keen intellect, warmth, and genuine interest in others made him a wonderful conversationalist, and his extremely outgoing nature often made him the life of a party. He was very committed to family, and loved to spend time with his grandchildren, whether it be eagerly reading books at bedtime or playing lacrosse in the backyard. As a widower, he thoughtfully chose gifts for each grandchild’s birthday and at Christmas.

Jim was preceded in death by his wife, Elizabeth Wood Holtzworth, in 1991. He is survived by his daughters, Amy Holtzworth-Munroe of Bloomington, Indiana, and Anne Holtzworth of Cambridge, Massachusetts; his four grandchildren, Elizabeth and Matthew Munroe, and Liam and Ella Simons; and his close friend of 25 years, Joan Douglas, of Saratoga Springs.

A memorial service will be held in Cambridge, MA on Saturday, January 20, 2018, at 11 a.m. at First Church Cambridge, 11 Garden Street, with a luncheon to follow. There will also be a service in Gloversville, NY on the weekend of March 23-24, 2018. Visiting hours will be held from 4-6 p.m. on Friday, March 23, 2018, at the Walrath & Stewart Funeral Home, 51 Fremont Street. A memorial service will take place on Saturday, March 24, 2018, at 10 a.m. at the Mayfield Central Presbyterian Church, 22 North Main Street, Mayfield, with burial to follow in the Prospect Hill Cemetery, Gloversville.

In lieu of flowers, donations may be made to the Gloversville Library Foundation at http://gloversvillelibrary.org/appeals/ (PO Box 73, Gloversville, New York 12078); or to the Southern Poverty Law Center at donate.splcenter.org/ (400 Washington Avenue, Montgomery, AL 36104).