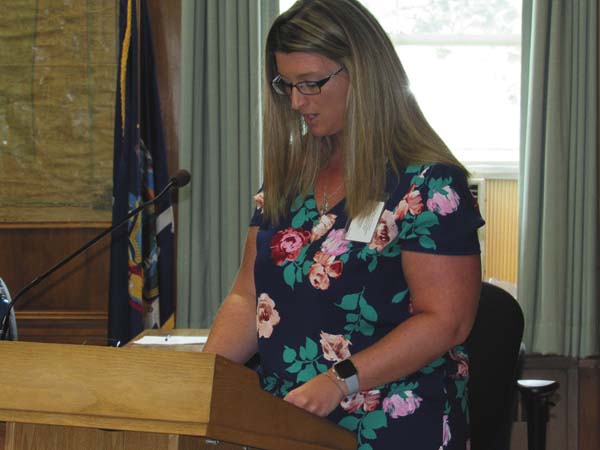 Fulton County Public Health Director Laurel Headwell provides a COVID-19 update to the Board of Supervisors' Human Services Committee Tuesday at the County Office Building in Johnstown. (The Leader-Herald/Michael Anich)

JOHNSTOWN — The Fulton County Public Health Department will work with the county’s school nurses in coming weeks on COVID-19 issues in advance of the 2020-21 school year.

County Public Health Director Laurel Headwell reported on the education side of the pandemic during an overall COVID-19 update she provided to the Board of Supervisors’ Human Services Committee Tuesday at the County Office Building.

Headwell said her department has worked with county school districts with reopening plans and guidance. She said she has been on Zoom with groups and attended in-person at the Hamilton Fulton Montgomery BOCES center. She said Fulton County public health nurses will be working with school nurses in the “forthcoming weeks” to educate and prepare the nurses for the upcoming school year.

“The school nurses have a lot dumped on them,” Headwell said.

She said nurses may have to don special equipment in their duties at the schools.

Elsewhere in her update, Headwell said that as of Monday, Fulton County had recorded 275 cases of coronavirus, and there were currently four “active” cases. The 275 figure represents positive cases since the beginning of the pandemic in the spring. Overall, she said 10,851 people have been tested in Fulton County for COVID-19. She said 236 of the positive cases recovered.

“That is exciting for our community,” she said of the recoveries.

But Headwell noted 35 people in Fulton County have died from COVID-19, including 28 at the Fulton Center for Rehabilitation and Healthcare. The Fulton County Public Health Department was “one of the first” agencies of its kind in New York state to have its nursing home tested, she said.

She said the Public Health Department has “diligently” worked throughout the pandemic with 15 staff members.

“We have been able to go to one nurse on the weekends,” Headwell said.

Headwell praised her staff, which has taken on many tasks, she said. The staff has worked successfully and together “beyond any words I could have,” she said.

Headwell said the current wait for COVID-19 test results in New York state is about seven to nine days now. But she said health officials “need a turn around a lot quicker” — about two to three days.

Headwell said Fulton County began using the New York state contact tracing system May 21, and such tracing has continued to slow the spread of the virus. She said the county continues to also work with local businesses, groups and county departments as they reopen.

The health official continues to meet with the COVID Task Force Team — a “wonderful resource” — on a regular basis.

In a question and answer period, Stead stated: “Fulton Center was obviously your major outbreak.” But he said he wanted to thank Dr. Kevin Cope for his help, especially during the breakout at the center.

“He took it very seriously, he dove in,” Stead said.

Stead said Cope and one of his staff went into the center and did more than 100 tests. He said in such situations, you need local providers willing to “wade into this.”

“He helped us get through that period of time when nursing homes were a big challenge,” he said.

Stead said he and Board of Supervisors Chairman Warren Greene have been on calls related to COVID-19 every day. He said Fulton County, as a mall county, is handling the pandemic the best it can.

“Everything has been very stable in this county in the past two months,” Stead said.

Greene said the key to getting the pandemic under control is “tracking, tracing, isolating and treating’ of patients.

Gloversville 1st Ward Supervisor Marie Born, chairwoman of the Human Services Committee, offered Headwell kudos to her department for the way the pandemic is being handled locally.