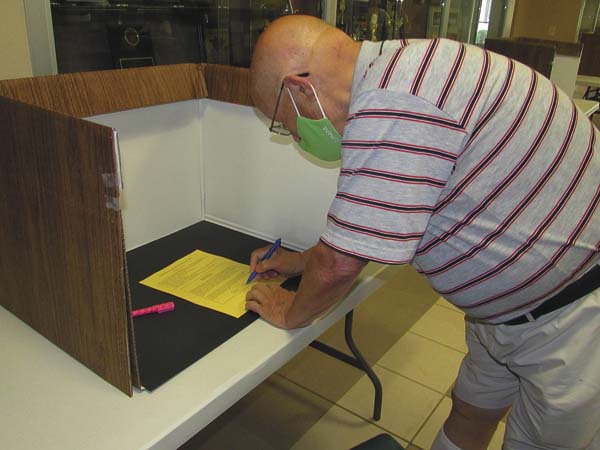 Voters had to by law okay the spending plan by at least a 60 percent supermajority.

District Clerk Larraina Carpenter said the final tally was 1382 yes to 731 no, or by 65 percent. Because the proposed 5 tax levy increase exceeded the district’s state-calculated “cap,” the supermajority of 60 percent was required for passage, she said.

Board of Education President Christopher Tallon said today that he was “absolutely” happy about the outcome. First, he thanked the district voters for observing the entire “process” of voting that took place Tuesday in-person in light of COVID-19. The second budget election combined two different ways for district residents to cast their ballots — in-person at Johnstown Junior-Senior High School — and filing out absentee ballots.

Voters entered a different part of the school and had to socially distance until they got to the voting area in the school auditorium lobby. There, the masked voters were called alphabetically to vote.

Tallon said he wanted to thank “all the voters for adhering to our policies and procedures.”

Secondly, Tallon said he was grateful for the approval, because not approving the budget the second time around would meant the contingency process.

“The contingent budget would have eliminated a lot of programs,” he said.

Tallon said the district continues to be working on a three-year financial improvement plan. The original plan showed 14 percent levy hikes all three years. He said next year for the 2021-22 budget, the district is “hopeful” in the third year it can again keep any tax levy increase down to single digits.

But the board president said he is mindful of state aid cuts because of COVID-19. The district is hoping “reasonable increases” and cost-of-living-adjustments are part of the future planning.

In a late Tuesday statement released on the district website, Interim Superintendent Karen Geelan imparted: “We appreciate everyone who came out to vote today, as well as those who voted by absentee ballot. We are truly grateful for the community’s support of our schools.”

“Throughout this process, we have said that we can’t cut our way to excellence,” Geelan stated. “This budget will allow the district to maintain and continue to improve programs for students.”

Johnstown school district voters June 9 defeated the originally proposed $38.9 million budget with a 5 percent tax levy increase for the 2020-21 school year. That vote was 1,526 in favor and 1,137 opposed — a margin of 57 percent — or 3 percent less than the required 60 percent required supermajority. The same spending plan was essentially presented Tuesday, with the supermajority again needed.

According to the district website, the budget was a “needs-based spending plan that keeps the district on course toward educational excellence and fiscal sustainability.” District officials said an “average” taxpayer with a home assessed at $100,000 can now expect to see a tax bill increase of $80.65 per year, or about $1.55 per week.

The website says teaching resources are being redeployed to provide additional academic intervention services and information literacy instruction. Athletics and extracurricular activities are restored to 2018-19 levels. Art and music are maintained at the elementary schools and the junior-senior high school. A social worker, whose services can be subsidized by aid, is being added to support the increasing social-emotional needs of Johnstown students. The 2020-21 district budget continues to address the “critical areas” needed to allow the district’s financial status to be in good standing, officials say. The district has closed one elementary school [Glebe] and repurposed the junior high [Knox] building to reduce costs while still providing a full array of programs for students, the website says. Sixteen positions have been eliminated as a result of the building closures and declines in student enrollment. Changes in insurance carriers for active employees and retirees have resulted in further savings.

Under a contingent budget the district wouldn’t have been able to increase its tax levy, and an additional $890,000 would have had to be cut from the budget. District officials previously indicated additional reductions would directly affect student programs and services as well as intended purchases, such as a plow purchase the district has put off for the past few years. In addition to regular increases in costs of programming and services, resources are being shifted to address areas of critical need. This includes support for struggling learners, promoting equity for all students, the website says.