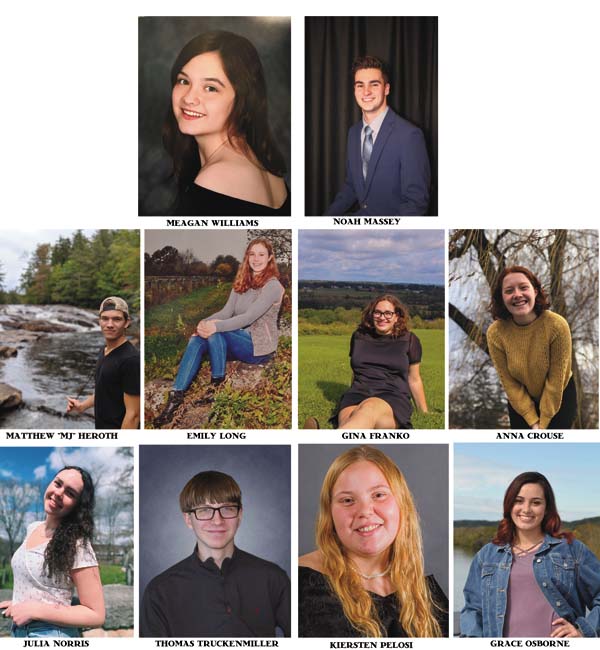 JOHNSTOWN — The following are the top 10 Johnstown High School seniors of the class of 2020:

∫ Meagan Williams, daughter of Trisha and Jacen Williams, is the Johnstown High School Class of 2020 Valedictorian. She volunteers for the JHS Backpack Program and is a member of the National Honor Society. She has participated in choir throughout high school and performed in the All-County Music Festival in 2018 and 2020. She has received various awards throughout school including the Geometry, English 9, Algebra 2/ Trig, Spanish 3, U.S. History, and Pre- Calculus awards. Meagan will attend SUNY Oneonta in the fall to major in biology in a pre-veterinary program.

∫ Noah Massey, son of Marvin and Danielle Massey, is the Johnstown High School Class of 2020 Salutatorian. He is the president of the Johnstown Student Council, as well as an active member of the National Honor Society. Noah was captain of the football and basketball team and played baseball in the spring. He won the Most Improved Player Award for football and was a Class B North Division Honorable mention for defensive back. He also received the Principal’s Award, as well as a Spanish 2 Award. He is active in the community, volunteering many hours of community service for various clubs and teams. Noah will attend SUNY Geneseo in the fall to major in neurology.

∫ Matthew J. (MJ) Heroth, son of Matt and Christina Heroth, will attend the University at Buffalo where he will be enrolled in the Pre-Med Program. This will enable him to go on to medical school to become an oncologist. Matthew is a member of the National Honor Society and has also participated in the International Club, Prom Planning Committee and Student Council. His academic achievements have been acknowledged by receiving an award from his teachers for excelling in the STEM classes his junior year. He has played on the JHS lacrosse team throughout his high school career and received high honors as a captain of the team during his junior and senior years. He was awarded All-Stars Honorable Mention for face offs his sophomore year and First Team for face offs his junior year. He was also a member of the Johnstown soccer team and club lacrosse teams in the off season. His volunteer work included teaching youth lacrosse during Little League Camp, and tutoring classmates in mathematics and other academic areas.

∫ Emily Long is the daughter of Dr. Michael and Stephanie Long. She will attend Siena College to study law in a 3-2 program with Albany Law. Emily has been involved in Marching Band, Science Club, Yearbook, and Masterminds. She is a member of the National Honor Society and has competed in different sports throughout her high school career. She is a member of the Drama Club and has played a wide range of characters in both musicals and plays. Emily has owned and showed horses for years and was named Youth of the Year in a 2016 show. Emily has received various awards including the Bausch and Lomb Science Award. Her volunteer work includes teaching Sunday school at Holy Trinity Catholic Church and her participation in the backpack program at school.

∫ Gina Franko is the daughter of Michael and Rita Franko. She will attend Russell Sage College in Albany to study Health Sciences. Gina has been involved in a variety of activities both in and out of school, including Drama Club, National Honor Society, Yearbook, Track and Field, and Class Activities. She received the George Eastman Young Leaders Award in her junior year, as well as a varsity letter in both track and tennis. She is also involved in her community, as a volunteer at her church, a candy striper at Nathan Littauer Hospital, and helping at Walmart-sponsored events with her family.

∫ Anna Crouse is the daughter of Julie Swift and Patrick Crouse. She will attend Stony Brook University in the fall to study Marine Science. Anna is the secretary of the WAW National Honor Society, co-president of Music for the Mind, president of the Yearbook, and treasurer of the Drama Club. She has been an active member in many drama productions, NYSSMA and Area All-State, Track and Field, Marching Band, Philharmonic Winds, Acapella, and Jazz Band. Anna has enjoyed volunteering with the Spirit Band and several other groups who perform in the community and advocate for art programs in our schools.

∫ Julia Norris, daughter of Heidi and Scott Norris, will attend the University at Buffalo this fall to major in marketing and minor in film studies. Throughout her high school career Julia has been involved in many clubs including International Club, Key Club, and Marching Band, and is an active member of her class. Julia was a member of the Fo-Jo varsity swim team for four years and was a captain her senior year. In her junior year she received the Most Improved Award and the Most Dedicated Award her senior year. Julia was also a member of the Foothills All-Star Team for swimming. She achieved sectional championship times in individual events all four years. Julia was inducted into the National Honor Society and has participated in community service projects with them including highway cleanups. She is also a member of the Backpack Program, and has played in the band for Veteran’s Day ceremonies.

∫ Thomas Truckenmiller is the son of Rachel and Greg Truckenmiller. He will attend Fulton-Montgomery Community College to study General Studies. Thomas has been involved in the Hiking Club, Marching Band, Student Council, and the Gaming Club. He volunteered with the JHS Backpack program and worked as a casual custodian for the school district.

∫ Kiersten Pelosi is the daughter of Craig and Tessa Pelosi. She will attend SUNY Oneonta to study biology with a pre-veterinary concentration. Kiersten has been involved in the National Honor Society, the Backpack Program, and Advanced Choir. She has also received the Spanish 4 Award and Student of the Quarter for Pre- Calculus. She was also a part of a group that was awarded top honors for Unit 4 in the New York State We the People Competition. Kiersten has volunteered in the Highway Clean ups, Pumpkin Decorating with the elementary kids, Lab Day with the students at Pleasant Avenue, and singing at baccalaureates and graduations for past graduates of Johnstown High School.

∫ Grace Osborne is the daughter of Robert and Jennifer Osborne. She spent her senior year involved in the New Visions Health program and was accepted to FMCC’s highly selective Radiologic Technology Program which she will attend in the fall. She is the vice president of her class and she is a member of the National Honors Society. She is a co-founder of the Women’s Soap Club and is also involved in the JHS Yearbook Club. Grace received The 2019 Leading by Example Award. Her volunteer work includes highway cleanup, assisting with food pantry and Thanksgiving dinner, helping set up for the annual mini golf fundraiser at the Johnstown Public Library, and she has been a lifeguard at the JHS pool.