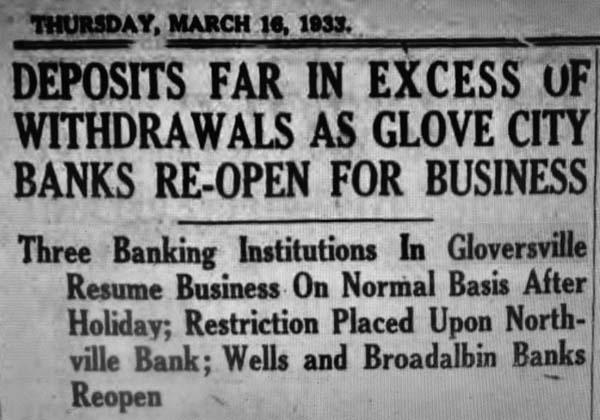 On March 6th, 1933, three days after the block-buster film “King Kong” premiered, newly-elected President Franklin Roosevelt ordered a national bank holiday to deal with an even larger gorilla, loss of confidence in our banks.

Roosevelt’s ‘bank holiday’ wasn’t declared to give bankers a holiday but to prevent millions of nervous Americans from withdrawing all their savings from banks, thereby draining whatever little capital banks had left.

During Roosevelt’s week-long ‘holiday’ no one could access accounts. Roosevelt’s economists quickly crafted the Emergency Banking Act, successfully restoring public confidence in a new national bank system with federally-guaranteed accounts, but during this week-long account freeze, what could the average person do, suddenly caught short or completely without money, but still needing food and necessities?

This difficulty way back in 1933 wasn’t much different from our present virus-induced closing of millions of businesses, with workers furloughed and paychecks temporarily forfeited.

The answer in 1933, adopted by many communities across America, was both innovative and simple: If there wasn’t any real money available, print something else. Sources claim at least 58 cities in New York state did, and Gloversville was one. It issued its own ‘money’, and our Morning Herald newspaper printed it.

March 10, 1933’s Morning Herald explained Gloversville’s innovative strategy as follows. “Local ‘script’ issued on the good name of local businesses will make its appearance in the glove cities today to take the place of real money, which is tied up in banks by the government’s current bank holiday. This script is issued at the instigation of the Glove Manufacturer’s Association and printed by the Morning Herald. It can be secured by any firm that wishes to put it in employee’s payroll envelopes and can be obtained from the manufacturer’s association or the Gloversville and Johnstown Herald offices. The script is negotiable for food products because the Square Deal Grocers have agreed to accept it for goods. Many other retail merchants have also agreed.”

Beyond Gloversville, any merchant anywhere in Fulton County could also obtain it and pay employees with it.

“Each firm issuing this temporary script is responsible for the amount issued, and must pay in real money, ten days after normal banking systems are re-established. It takes the place of real money for now and is just a temporary means of barter. No one need fear using it: Each firm issuing it stands behind it.”

How exactly was all this bartering to be accounted for? “The script will be signed by the firm issuing it and the name of the person receiving it will be written on it.”

Although it appears the majority of Fulton County businesses agreed to accept it, “No one is forced to accept it: It is an entirely voluntary arrangement to accommodate those who receive it as pay for their goods or services.”

Visit the website, www.depressionscript.com, and you can view examples of city-issued script, including three of Gloversville’s, issued in one, two, and five-dollar amounts, each a different color.

Gloversville’s script system worked, kept retail stores open, and allowed the working population to receive their usual weekly payroll ‘money’ to continue purchasing food and necessities during the national banking holiday’s week-long hiatus. An unstated side benefit of this short-term script ‘banking’ system was that it prevented any financial burden from falling on the shoulders of the single largest group of 1933 county-wide consumers, the hundreds of workers in the glove and leather industries. While the Glove Manufacturer’s Association also served its own interests by keeping the factories and shops open thanks to the spendable script, what did this ulterior motive matter if it worked?

Another factor in the success of Gloversville’s script system was cooperation by members of the already-mentioned Square Deal Grocer’s Association. What was that? Formed circa 1929, it was essentially a cooperative trade organization of Fulton County’s retail grocers who met monthly to discuss mutual interests, advertising methods, and other topics relevant to retail food sales, as well as to create good will and combat sales losses to super markets like Grand Union, Acme etc.

One of the grocers, by the way, was a Mr. Foody. As Square Deal members enthusiastically (and not very modestly) described their goals in one 1931 advertisement, “We have striven to offer foodstuffs of a quality second to none. No effort has been spared – no expense too great – to give our customers the best in quality.” Square Deal members with groceries located in Johnstown, Gloversville and our smaller villages totaled 82 in 1933, so it was important they all agreed to accept Gloversville’s script, including Mr. Foody.

Meanwhile, nothing was financially wrong with any of our local banks. Managers met March 6 to discuss reopening on March 9. The Herald observed on March 4, the day of closing, “Those desiring to bank who couldn’t took the situation with smiles and there were no signs of worry.”

As for the script, “many of the firms issuing script are now ready to redeem them in cash at their offices.” So ended the Morning Herald’s brief venture into the business of printing ‘money’.