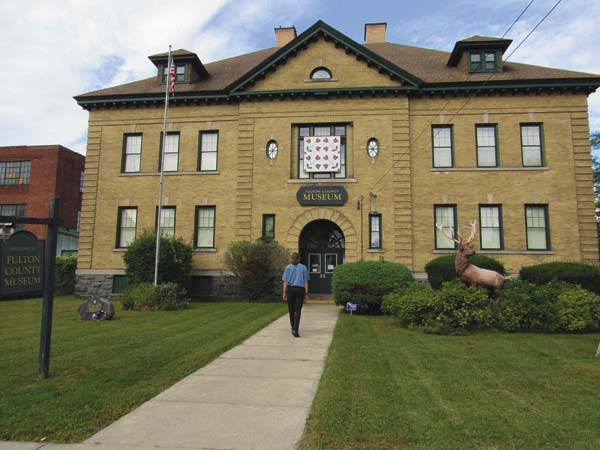 Fulton County Historical Society and Museum Board of Directors Treasurer Gregory Young heads into the museum at 237 Kingsboro Ave. in Gloversville on Sept. 26. (The Leader-Herald/Ashley Onyon)

GLOVERSVILLE — The Fulton County Historical Society and Museum is one of 31 history related organizations across the state that will receive grant funding from the Pomeroy Fund for New York State History.

Launched in partnership between the William G. Pomeroy Foundation and the Museum Association of New York, the Pomeroy Fund for NYS History announced the award of $50,808 to 31 organizations with operating budgets of $100,000 or less that have been forced to close in response to the coronavirus.

“History organizations help to enrich our communities,” said Bill Pomeroy, founder and trustee of the Pomeroy Foundation in a prepared statement. “The Pomeroy Fund for NYS History was established to provide much needed assistance during these challenging times. This was a very competitive grant program and our hope is that the funding that’s been awarded will make a meaningful difference in the time ahead.”

Grant awards of $1,000 to $2,000 can be used to purchase computer hardware or software, to gain internet access or expand bandwidth, to pay for utilities or to secure facilities and collections.

Fulton County Historical Society Executive Director Samantha Hall-Saladino on Monday said the museum received a grant of just over $1,500 for the purchase of a new computer and related software as the museum shifts away from the planned expansion of on-site programming to a new virtual calendar of events.

“Before all of this happened, I had been looking for grants hoping to buy another laptop for the museum, basically it’s an additional newer laptop to upgrade our technological equipment,” said Hall-Saladino. “Last year the museum hired its first executive director after completing a strategic plan with the idea of bringing the museum into the 21st century and increasing recognition for the museum through more opportunities for events.”

Hall-Saladino, during her first year on the job in 2019, oversaw the day-to-day operations of the museum while working to develop new programs and special events, fundraising campaigns and plans to update museum exhibits, hoping to showcase the museum as a resource and central hub for the community.

After seeing the success of an exhibit and events celebrating Fulton County’s heritage as a tanning and glove industry giant during the “Year of the Glove” in 2019, Hall-Saladino this year planned to introduce a new exhibit and series of programs centered on life in Fulton County in the 1920s. Those plans were altered when the museum was forced to close its doors to the public in accordance with Gov. Andrew Cuomo’s stay at home order to slow the spread of the coronavirus.

Hall-Saladino said the planned exhibit has now been moved online to an international storytelling website called Vamonde and features audio visual components that likely could not have been featured in a physical exhibit at the city-based museum.

“While not as cool as being able to view the exhibit in person, hopefully it will still be a good experience online,” said Hall-Saladino.

Hall-Saladino is also working to develop online programs to take place the coming weeks and months on Fulton County’s history in the 1920s and has been hosting virtual story times on the museum’s Facebook page while reading children’s books focused on major events from the “decade that roared.” One notable book that Hall-Saladino recently featured centered on local suffragette Elizabeth Cady Stanton as the country celebrates the centennial anniversary of the passage of the 19th Amendment that gave women the right to vote.

While Hall-Saladino works to continue offering new programs and events for the community to enjoy remotely, she noted that her goal of increasing membership will likely be hard to carry out and increasing the number of visitors will not be possible this year, as the Board of Directors recently voted to keep the museum closed to the public for the remainder of the current year over concerns surrounding the threat of the coronavirus.

“We are quite a small operation and we weren’t sure we could maintain the standards necessary in terms sanitization with so many surfaces someone could touch in the museum. We don’t have a cleaning staff. It was a difficult decision, but it was made based on the concern for safety of staff and people who would be coming through our doors,” said Hall-Saladino.

The move could hamper efforts to expand fundraising initiatives at the museum, which had begun charging for admittance to some programs and maintained a donation box at the entrance. Hall-Saladino had been planning to host the museum’s first ever fundraising gala in the fall and now plans to rework the idea into a virtual event following the warm reception received during the museum’s virtual ice cream social hosted via Facebook Live on Friday.

“The ice cream social is one of museum’s biggest fundraisers and has been for years. It was not the same as it usually is, but we had some great engagement online,” said Hall-Saladino who led viewers on a livestreamed tour of the museum before awarding prizes to winners of online contests that were opened ahead of the event.

“Even though it looked different, it still successfully showed off the museum and let people know that we’re still here. Our doors may be closed, but that doesn’t mean that we’re not going to continue to serve our community in the best way we can,” she said.

While she continues to work to develop new virtual programs, Hall-Saladino said she will also be looking for new grant opportunities to help support the museum during its physical closure. She already submitted an application for grant funding offered through the non-profit Humanities New York that she is waiting to hear about and she plans to review submission guidelines for a second round of grant funding announced by the Pomeroy Fund for NYS History when details are released.

Hall-Saladino and the Board of Directors are also hoping to hear ideas from the public during a virtual meeting on Thursday at 5:30 p.m. to hear what residents would like to see from the museum throughout the year of virtual programming and in 2021 when Hall-Saladino expects the museum will reopen its doors.

“We’re definitely stretching our muscles a little bit trying to come up with ideas to reach the community. I think it will help us change the way in which we reach people and hopefully let us expand our reach as we get more familiar with the technology and virtually connecting with people. I’m hoping building these skills now will be a good skill set to have in the future,” she said.

For more information about the Fulton County Historical Society and Museum or to view virtual programs and tours, visit on the Fulton County Museum Facebook page or fultoncountyhistoricalsociety.org/. Details about how to access the virtual Board of Directors meeting on Thursday at 5:30 p.m. can be found on the museum’s Facebook page.