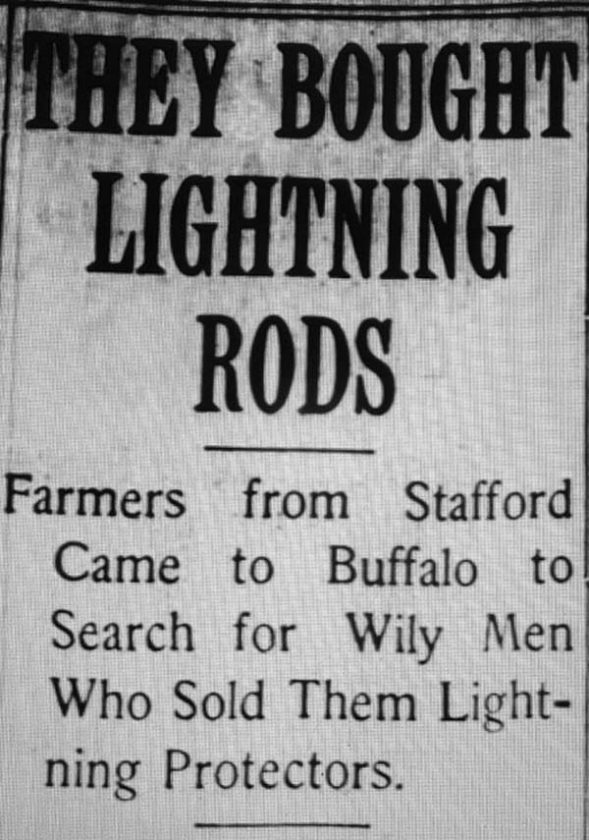 The July 13, 1902 Buffalo Courier related just one of many tales of smooth-talking lightning rod agents bilking farmers. Better keep your social distance from them. (Photo courtesy of Peter Betz)

Scams aren’t new. They existed long before the telephone, computer, and internet were dreamed of. Probably the most common, most successful 19th- and early 20th- Century scams involved selling lightning rods, and this was usually practiced against farmers whose livelihood centered around preserving their barns.

The original mid-century form of lightning rod scam occurred when a slick salesman displaying phony credentials from a supposedly-legitimate, but non-existent company would convince a farmer to protect his home and barn by buying the salesman’s rods.

The salesman promised a rod installer would appear shortly after the farmer gave the salesman a cash deposit. The bogus agent shook hands and went his way, but the ‘installer’ would never appear. He couldn’t, because he didn’t exist.

Earliest newspaper warnings of this scheme appear in the late 1860s. This basic swindle, however, didn’t net scammers very much money, so more profitable variations appeared.

An 1894 book, “Dr. Chase’s Recipes, or Information for Everybody” warned readers against such scams. Regarding lightning rod swindles, Chase wrote, “It is usually in the form of a note or contract placed in the hands of an innocent party that he thinks is just a contract to install the rods, but which can be collected on later, because it is actually a promissory note the swindler can cash at any bank, and the bank will soon after force collection of the money from the hapless farmer.”

Another variation, Chase explained, was the subsequent arrival of a so-called lightning rod inspector displaying phony credentials who offered for little or no cost to examine a farmer’s recently-installed lightning rod system. He would of course find fault with the installation and charge the farmer more to ‘repair’ it.

Even the editor of the Gloversville Daily Leader was down on them, judging from the following warning, published on June 21, 1902 under the headline, “Old Lightning Rod Swindle: The Barn May Escape but the Farmer Gets Stuck Every Time.”

Referring to the fact that it was now late spring and the country roads, clear of mud, could be easily traveled by peddlers, the editor wrote, “The slick-talking man with his paraphernalia is again on the road to introduce his wares. It develops that our Fulton County farmers are again being selected for an easy mark. The method is to begin by telling the farmer that in order to introduce their line of goods in this county, they desire to have a contract with a prominent, well-known farmer to start the ball rolling, and in order to get that prominent farmer to take their rods on contract, he would be charged only a minimal sum. If the farmer bites, a paper is produced which is understood to contain such an agreement. A few days later, a second man comes and puts up the rods, but following him comes a third man with a bill averaging several hundred dollars above the introductory price quoted by the original salesman. Of course, the indignant farmer refuses to pay, but even later yet comes a deputy sheriff with a judge’s order to pay, since the promissory note with the farmer’s signature has been sold by the clever salesman to a nearby bank, and the bank won’t take no for an answer.”

Arriving arm in arm with phony lightning rod scams were equally-phony fire insurance peddlers. It didn’t take much more than a printing press, some high-quality parchment paper and a beautifully-ornate border template to create a non-existing but impressive on-paper ‘company’ such as “The Farmer’s Friend Great Fire Indemnity and Insurance Company of Chicago — Capitalization Five Million Dollars,” accompanied by a few phony testimonials such as one from “Farmer Horatio Jones of Hornell, N.Y., whose livelihood was restored after a fire because his ‘Farmer’s Friend’ policy caused that company to replace his barn.”

There were also scams aimed specifically at women residing in both city and country. These offered seemingly-legitimate ‘work at home’ opportunities when the majority of women were still home-bound with little chance of having outside employment.

The most common scam involved advertisements in ladies magazines enticing women to purchase for maybe 50 cents a “sample embroidery kit,” complete it, and return it to the so-called ‘company,’ which promised to purchase it back if it was well-enough embroidered, and then offer the lucky embroiderer a lucrative contract for more embroidery.

What a golden opportunity this must have seemed to women with good sewing skills but no earning power in those old times. Sadly, all they ever received for their embroidery, even if it was top-notch, was a penny postcard stating their work wasn’t acceptable, so good-bye. They were too naive to realize the so-called ’embroidery company’ didn’t exist, the address was nothing more than a post office box, and the scammers had already made their money by selling them and hundreds of similar women the 50 cent sample kit, costing no more than three cents each.

When Benjamin Franklin invented what he called the ‘lightning attractor rods’ in 1749 and advocated people attach them to their buildings to draw lightning safely into the ground, he most certainly never envisioned that at the same time, he was creating opportunities for scammers to exploit innocent victims for more than 150 years.