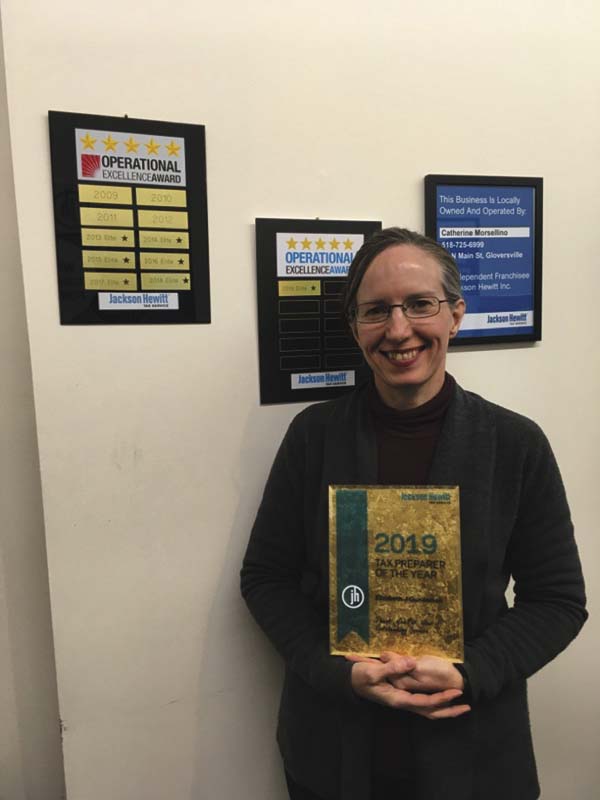 AMSTERDAM — Each year 6,000 Jackson Hewitt locations around the country nominate one staff member for Tax Preparer of the Year, with roughly 15 employees in different regions selected to receive the award. This year Jackson Hewitt selected local kiosk operator Elizabeth Gundersen as the recipient from the northeast.

Franchise owner and Tax Preparer Catherine Morsellino described Gundersen, who manages the Jackson Hewitt kiosk at the Walmart in the Sanford Farms Shopping Center, as the star for the 2019 tax season from her three locations in Amsterdam, Gloversville and Fonda.

“She worked very hard for it,” said Morsellino. “I was very proud of her. We nominate somebody every year, we try, but there’s a lot of competition out there.”

Just getting to the point of eligibility for nomination is a “long trip,” said Morsellino. New tax preparers attend classes at Morsellino’s Gloversville location at 36 N. Main St. from roughly September through December studying federal and state tax law, learning Jackson Hewitt policies and procedures and how to translate the information into completing returns through the company’s software by working through practice problems on computer modules.

Once this internal training is complete, new prepares must register with the state and the Internal Revenue Service by completing four to 16 hours of online training. This is followed by their first tax preparation spent working in the Gloversville office with Morsellino. A normal tax season runs from Jan. 2 through April 15.

Basic training must be completed each year before tax season to keep up with the ever-changing tax laws and Jackson Hewitt provides continuing education courses for tax preparers to work on throughout their careers. Advancing through training allows employees to enter various levels of achievement, with the highest level available for entry after three years. Tax preparers must reach this highest level to be considered for Tax Preparer of the Year.

“Elizabeth has been with us seven years now. She’s in the highest level of membership clubs and she’s still training, she just brought me a new notice of a class she just took,” said Morsellino, noting Gundersen completes approximately 75 hours of training each year. “She spends her free downtime studying IRS law, she takes extra classes without prompting.”

Beyond her training hours, Morsellino said Gundersen puts in the time to get to know her clients. The level of familiarity that Gundersen achieves with each person and their circumstances makes completing their returns faster and easier each year.

No matter how complex each individual’s finances are, Morsellino said Gundersen and all of her tax preparers strive to make the process of filing a tax return as fast and easy for each client as possible while ensuring each person receives the full amount of credits they are entitled to under state and federal law.

“It’s a balance between technical skills, tax knowledge and customer service skills. You can never forget the customer service, it’s the most important. I can teach anybody to use the computer, but to explain it to a customer, to know why things changed is the important part of the job,” said Morsellino.

Morsellino expressed pride in Gundersen for receiving the award of Tax Preparer of the Year, noting that it’s a lifelong achievement.

“We’re not eligible again, they consider it a career path, once you’re in the club you stay in the club,” said Morsellino who joined the club herself when she was named Tax Preparer of the Year in 2010.

With seven employees already eligible for nomination this year, Morsellino is hoping additional staff members will one day join her and Gundersen in holding the title of Tax Preparer of the Year.

“It’s a great award for her,” said Morsellino. “It’s also a reflection on the entire franchise, because it shows how hard we work on our training and how hard we work to keep our customer service levels up.”