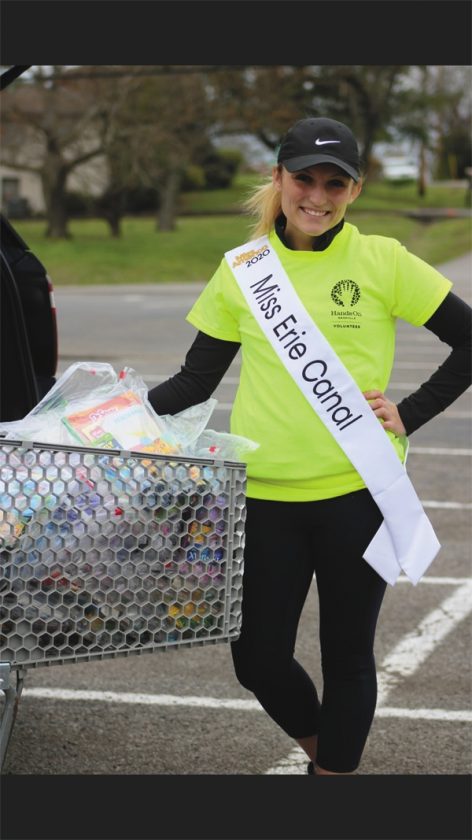 JOHNSTOWN — City teen Alexis Houser had heard of coronavirus, but was undaunted in her mission to help those in need in Tennessee.

She recently went to the Nashville area to assist those who lost everything in the catastrophic March 2 and 3 tornadoes.

The 19-year-old Fulton-Montgomery Community College student flew down and assisted, at her own expense. She had made many acquaintances over the years in Nashville and figured they needed her now.

“Once I heard the tornadoes hit, I said I have to do something,” said Houser, who also holds the title of Miss Erie Canal.

The Johnstown resident is the daughter of Eric and Misty Houser. She said she and her mother had been coming to Nashville for years during her childhood to take in Country Music Association classes.

“It was our annual girls trip,” she remembers.

During those trips to Tennessee right up to high school, she said she met many new friends. Some of them even visited her when she graduated from Johnstown High School.

On March 2 and 3 the Nashville area, along with western and middle Tennessee, in general, was hit by a series of large tornadoes that flattened homes, left 26 dead and more than 300 injured. Thousands were left without power.

Alexis said she is friends with about 100 people in the Nashville area, really close with out 25, and had no problem springing into action.

According to mom Misty, her daughter headed by plane to Nashville March 12 to help with the tornado relief, returning to Johnstown on March 16.

“This was all done by her,” Mrs. Houser said. “She made a few phone calls, asked me to book her flight, secured lodging, safe transportation while there, searched volunteer opportunities and started taking donations”

Alexis headed down to Tennessee with almost $500 in supplies as well as gift cards to assist families. Her mother said while they’re in a world full of negative, “she is going down to spread the positive. While most kids head to Florida or Cancun to party on spring break, she’s leaving here with one agenda, to help as many people as possible. She is so humble and has no clue how amazing this really is”

Alexis, who has worked at Market 32 in Saratoga, used her own funds and once she got to Nashville, she got to work. She said she “there was no stopping me.”

The first day involved driving around and checking out the damage. She remembers seeing one home that all that was left was a bathroom. She had to stay in that night because the area was still in a Tornado Watch.

But by day two, Alexis said she got busy visiting the Diaper Connection in Nashville. She donated 832 diapers. She also helped sort out donations at the Mt. Gillead Church.

On day three, Alexis was back to The Diaper Connection in Nashville where she wrapped some more diapers for a few hours.

Her fourth day involved a trip to the Hermitage Community Center where she was able to be a personal shopper for tornado victims. She said it was “the best way to learn” and she assisted FEMA and the American Red Cross.

“This was the most incredible way to spend my last day in Nashville because I was able to connect with so many people including my new “best friend” Janet, who lost everything in the tornado,” Alexis said.

Her new friend has Down Syndrome and didn’t realize how much she lost.

Alexis said that her trip to Nashville and now confronting the reality of coronavirus that we all face has only made her look at life for the better.

“I’m so appreciative of what I have,” she said.