Members of the Gloversville Department of Public Works clear snow along Fay Street on Thursday a little before noon. (The Leader-Herald/Ashley Onyon)

Snow removal was ongoing along the side walks of East Fulton Street near downtown Gloversville Friday. ((The Leader-Herald/Joshua Bovee)

A view of a portion of the four corners in Gloversville is shown on Friday. ((The Leader-Herald/Joshua Bovee) 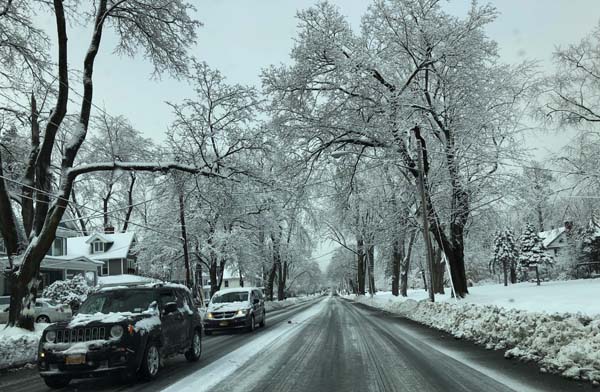 She said more information regarding the crash will soon be released. 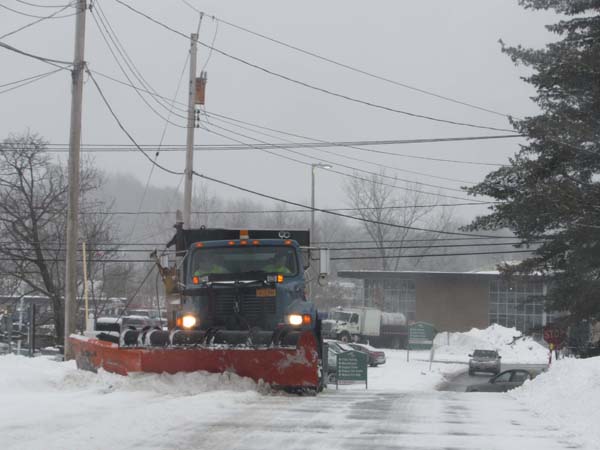 Members of the Gloversville Department of Public Works clear snow along Fay Street on Thursday a little before noon. (The Leader-Herald/Ashley Onyon)

National Weather Service meteorologist Dan Thompson said the worst the storm occurred during the afternoon as areas in Fulton and Montgomery counties saw four to eight inches of snow fall. He said winds picked up as the snow began taper off. Temperatures got as low as 10 degrees Fahrenheit on Friday.

Smith said extra dispatchers were on duty, as there were tractor trailers, cars and trucks going off roads, getting stuck and bumping into other vehicles. Some roads had to be closed temporarily throughout the day while tow trucks removed vehicles that went off the roads. By 4 p.m. Friday all roads were reopened in Montgomery County.

He said there had been no serious accidents in Montgomery County

“We’re encouraging people to stay off roads. Always look where you are in case you need to call 911,” Smith said. 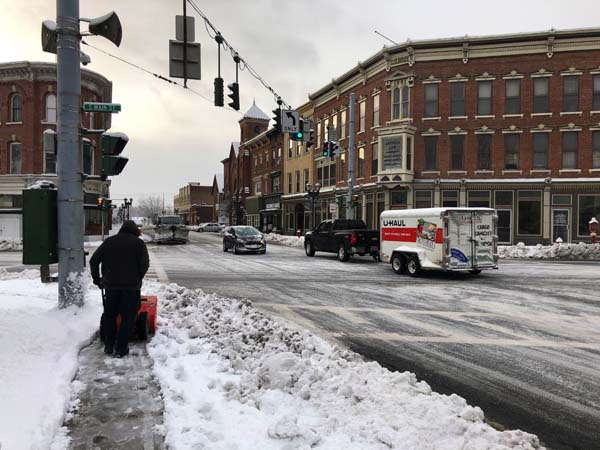 Snow removal was ongoing along the side walks of East Fulton Street near downtown Gloversville Friday. ((The Leader-Herald/Joshua Bovee)

Smith said there weren’t any trees or wires down as of 2 p.m. on Friday. In Fulton County however, reports came from Broadalbin, Caroga and Mayfield that there were trees down due to heavy snow, Fulton County Fire Coordinator Steve Santa Maria said.

There were a number of smaller outages reported in Gloversville, Perth, Hagaman and Mohawk.

In Hamilton County, 1,620 were without power in Lake Pleasant, Speculator, Piseco and Higgins Bay. The area around Gilmantown had 64 reported outages. 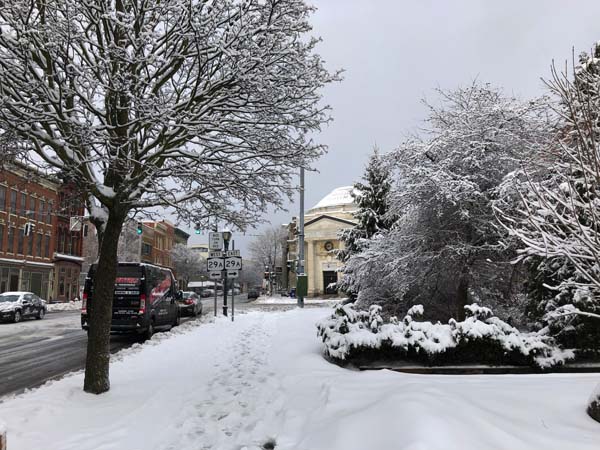 A view of a portion of the four corners in Gloversville is shown on Friday. ((The Leader-Herald/Joshua Bovee)

Santa Maria cautioned anyone who didn’t have to travel to stay home due to the poor road conditions along with high winds which will cause further dangerous conditions.

Thompson said winds were expected to reach 40 to 50 miles per hour a times on Friday.

Thompson said high winds can cause “wires to go down and can bring down trees and branches especially with snow and ice and can cause snow to drift and reduce visibility.”

Santa Maria said fire departments have been “very busy” with cars off the roads and with assisting the fatal accident. Fulton County Sheriff Richard Giardino said there were several cars off the roads on Friday and a serious accident that occurred in Ephratah. He said the driver was sent to the hospital and was awake and alert.

Santa Maria also advised drivers to use extra caution when traveling and to stay home if they did not need to travel.