Stead addresses ‘State of the County’

About 85 guests attended the Fulton Montgomery Regional Chamber of Commerce’s annual “State of the County” breakfast program Friday at the Johnstown Holiday Inn. (The Leader-Herald/Michael Anich) 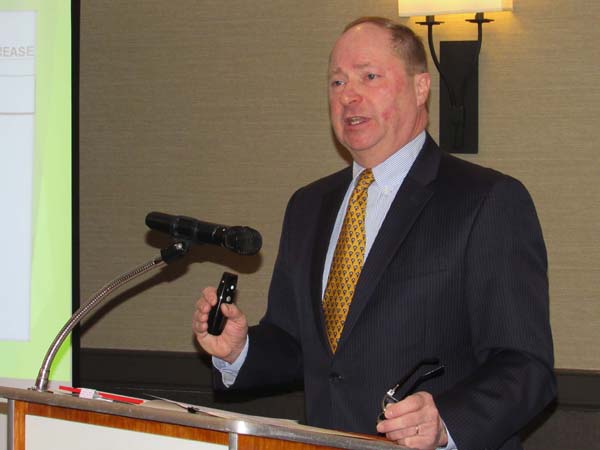 That theme was imparted by county Administrative Officer Jon Stead during his 28th annual “State of the County” address Friday before about 85 guests at the Holiday Inn.

The Fulton Montgomery Regional Chamber of Commerce conducted the annual breakfast program, in which Stead expounds on the past year county government happenings and where the county is headed.

“In Fulton County, we’ve got a lot of good things going on,” Stead stressed at the conclusion of his speech.

But as he has in past addresses, the county’s top administrator spent roughly the first half challenging regulatory decisions made by state government, especially Democratic Gov. Andrew Cuomo. Stead said he decided to refocus his address this year on the Medicaid mandate. 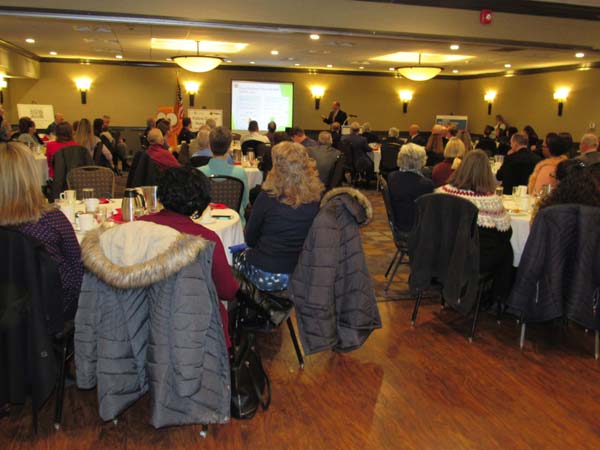 About 85 guests attended the Fulton Montgomery Regional Chamber of Commerce's annual "State of the County" breakfast program Friday at the Johnstown Holiday Inn. (The Leader-Herald/Michael Anich)

“Year after year, we are stable,” Stead said of Fulton County.

Stead noted the Fulton County Board of Supervisors last year passed a $93.5 million 2020 county budget with a tax rate of $10.89 per $1,000 of assessed valuation — a 1.2 percent average rate increase. He also noted the county has “zero” debt, and can spend $20 million more and still be below the state’s constitutional tax and debt limit.

Stead said Cuomo’s top achievement has been to get the state to put a cap on Medicaid, although some of that is being diminished.

“That made a big difference,” he said.

He said 69 percent of Fulton County’s tax levy pays for mandated programs. The Medicaid mandate represents 45 percent of that, he said.

Stead alluded to Cuomo’s “justice agenda,” in which he has eliminated bail for certain defendants, introduced early voting, put a ban on plastic bags and unsuccessfully tried to legalize recreational marijuana. He said the governor has also raised the age for tobacco purchases from 18 to 21, introduced a “Green New Deal” involving mandated total renewable energy by 2040, allowing online SNAP benefit purchases, and making the property tax cap permanent.

“What bothers us in Fulton County is the governor’s approach is don’t ask questions,” Stead said. “Just get onboard this train.”

He said Cuomo in 2019 “doubled down” on expanding government.

“It’s progress, if you call it, at all costs,” he said. “The governor has spent his administration and the taxpayers into a $7 billion deficit.”

Stead said Cuomo blames counties for some of the deficit, adding: “That is ridiculous, folks.”

“Medicaid spending is out of control,” the county official said.

He said Cuomo wants to cut local assistance for Medicaid by $1.8 billion, while rolling back the Medicaid cap and making municipalities stay within their 2 percent tax cap. Meanwhile, he said the governor’s agenda includes: scaling back the increase in school aid funding by $275 million, increasing New York City’s local Temporary Assistance for Needy Families share by $51 million, decreasing state aid to community colleges by $30 million, and ending state support for early voting by $25 million.

Fulton County’s $14.2 million Medicaid payment results in a $264 per capita per person local share. The county’s Medicaid expenditures is the highest percentage in the state.

But Stead’s speech shifted into more positive areas such as all the intermunicipal cooperation Fulton County is involved in.

“Fulton County is still chugging along getting things done, important things,” he said.

Inside the county, examples cited by Stead of intermunicipal cooperation were: the Fulton County Demolition Team’s assistance on North Main Street in Gloversville, a special patrol officer to HFM BOCES for its Meco School site, and reauthorizing school districts to share voting machines. Outside of Fulton County, cooperation has included intermunicipal agreements to Hamilton County for 911 backup and to Montgomery County for transportation of veterans.

“We’ve also worked hard over the past year or so to expand public safety,” he said.

The county has completed a New Neighborhood Plan in 2019, purchased a computer-aided dispatch system for the Sheriff’s Department, and improved on EMS. Examples of complying with state mandates, Stead said, include creating an office of assigned counsel administrator.

“Tourism is surely on the move,” Stead said.

Traveler spending increased from $50.5 million to $64.2 million, or 27 percent, from 2014-18. New feature events in the county have included the recent Walleye Awakening.

Stead ended on a positive note by discussing how the county works closely with agencies such as the Fulton County Center for Regional Growth — a “very active and progressive” entity — and the Fulton County Industrial Development Agency.