Smullen to run for reelection 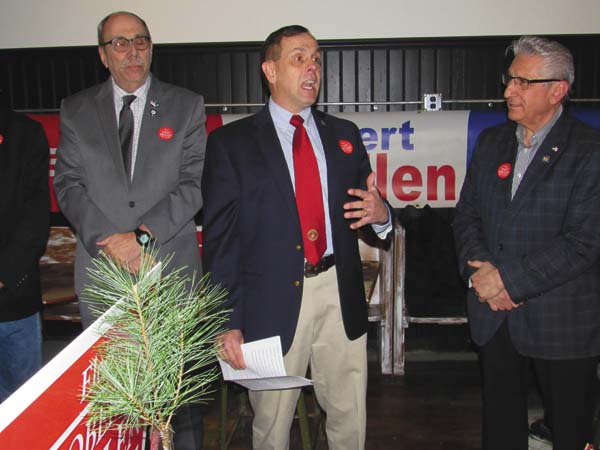 JOHNSTOWN — Surrounded by friends and family, freshman Republican state Assemblyman Robert Smullen of Meco on Thursday announced his intention to seek re-election to a second term to his 118th Assembly District seat.

The announcement by Smullen to seek another two-year term was made at an informal press conference at the Second Wind Coffee Shop on West Main Street.

“I believe I’ve done what I said I was going to do, which is to stand up in Albany to be a strong voice to what is going on,” Smullen said.

His 118th Assembly District is comprised of Fulton and Hamilton counties, and parts of Herkimer, Oneida and St. Lawrence counties. The assemblyman maintains offices in Albany, Johnstown and Herkimer.

Smullen became the first Fulton County resident to serve in a state Legislature seat since the early 1990s, when he defeated Democrat Keith Rubino on Nov. 6, 2017. He assumed the seat of former, longtime Republican state Assemblyman Marc Butler of Newport, who retired at the end of 2018. 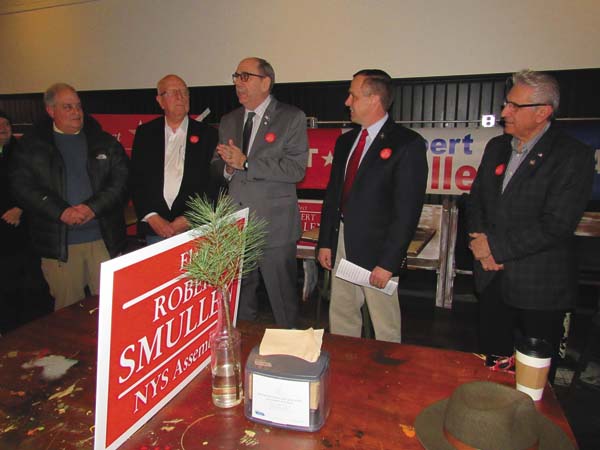 Smullen noted he has been “very active” on many committees in the state Legislature. He said it is his intention to “stand out” in the Assembly. In the coming year, he said legislators like himself will look at legislation such as Green Light Law and the Bail Reform Law.

On bail reform, he praised the involvement of Fulton County Sheriff Richard Giardino, who he said has been a “statewide leader” in opposing it.

Smullen told supporters he has logged 46,000 miles in the past year as a legislator.

“I don’t ever think twice about it,” he said. 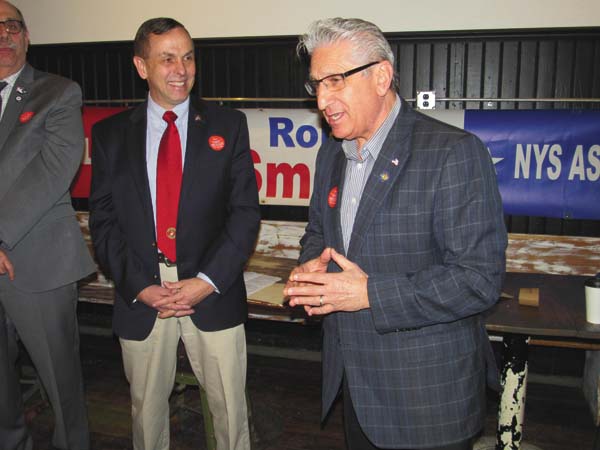 He said the state budget is also the “800 Pound guerrilla” that must be addressed in Albany.

Smullen took notice of the venue he was making his announcement, stating: “My second wind is fighting on behalf of the people of New York.”

“I’m deeply grateful for all the support,” he said.

Johnstown Mayor Vern Jackson said he was “thrilled” to be supporting Smullen, who has a bright future in Albany.

Fulton County Republican Chairwoman Susan McNeil expressed her support for Smullen, and noted the local Republican Committee will be conducting a meeting and “retention rally” at 7 p.m. Feb. 25 at the Holiday Inn. 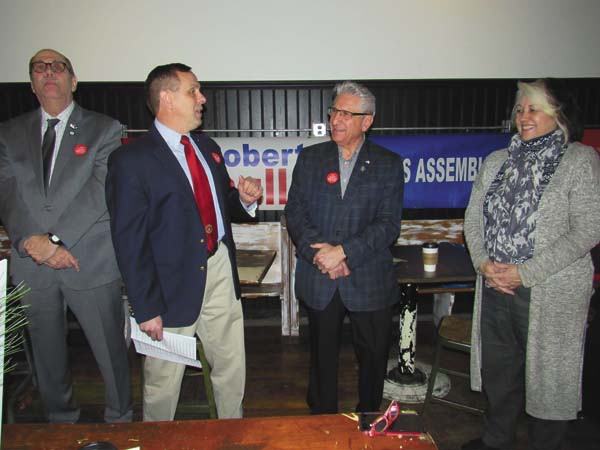 “This is a man who has hit the ground running out there, doing the things out there to make his district and my state a better place to live,” the senator said.

Tedisco said Smullen clearly “wants to get the job done for the people he represents,” often crossing the aisle politically.

“He works with anybody of any affiliation because he cares about his community,” he said.

In 2015, Smullen retired from the Marine Corps at the rank of colonel, with 24 years of service and three combat tours to Afghanistan, including participating in Operation Enduring Freedom after the September 11, 2001 attacks on New York City. He has also served at the Pentagon as a military strategist and in numerous command and staff positions around the world. Before election, Smullen served as the executive director of the Hudson River-Black River Regulating District.

In 2003, Smullen was appointed by President George W. Bush as a White House Fellow, serving at the U.S. Department of Energy in the Office of the Secretary of Energy.

Smullen’s education began when he attended Meco-McNab Elementary School in Gloversville, and as a 1986 graduate of Gloversville High School.

He holds a B.A. degree in history from The Citadel, The Military College of South Carolina, a M.A. degree from the School of Foreign Service at Georgetown University, and an M.S. degree in resource management from The Eisenhower School, where he is a distinguished graduate of National Defense University.

Smullen is a member of the American Legion and Marine Corps League, and volunteers with the New York Naval Militia.

A lifelong resident of upstate New York, Smullen currently resides on Matilda Hill Farm in the town of Johnstown with his wife, Megan. The couple has four children.