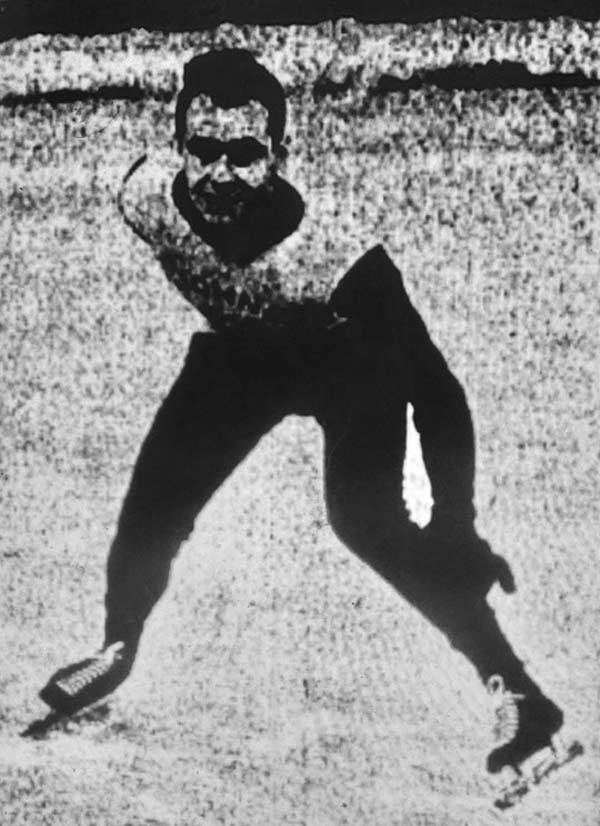 Although short on stature, Ted Ellenwood was nevertheless fast on his feet. He should have stuck to skating and left the golf clubs alone. (Photo courtesy of Peter Betz)

It’s winter, and what better way to tell a winter’s tale than by relating the story of Fort Johnson’s Ted Ellenwood, a young man whose fame as a speed skater could only have been earned during winter.

When many of us were children, most school playgrounds were flooded and groomed for skating, some by city recreation department employees — yes, they did things like that back then — others by volunteer members of a school’s PTA. Along with these skating locations, most towns and cities also had one or two larger rinks, often with warming houses. It was pleasurable to go out again after supper on a chilly winter night, walk but a few blocks back to the school we’d gladly left earlier in the day when the bell rang at 3 p.m. to skate with our friends for an hour or so, hoping to impress whoever we had a crush on that week with how fancy we could skate. The rich kids benefited from having real shoe-skates, whereas most of us had to make do with those infernal, ill-fitting metal platform skates strapped over our regular shoes, which often came undone just when we got going well and threw us down on the hard, unforgiving ice. They were the true definition of ‘cheap skates.’

For a long time, beginning in the late 1920s, the best area skating rink within Fulton and Montgomery counties wasn’t located in Amsterdam, Johnstown or Gloversville, but rather in the smaller village of Fort Johnson, overseen and very professionally-managed by dedicated volunteers of the Fort Johnson Athletic Association. FJ&G’s trolleys were still running then, and later on, their buses would continue delivering eager skaters and skating fans from our area cities and villages to Fort Johnson on winter evenings and weekends. Bleachers accommodated fans, rest rooms, male and female changing areas, and a large warming house existed also for skater’s convenience.

It was both accidental and fortunate for young Ted Ellenwood that he and his parents moved from Dunkirk, Chautauqua County, to Fort Johnson in the early 1930s and here at the Fort Johnson rink he discovered and developed his passion for speed skating. We first hear of him in a January 2nd, 1925 Newburgh News article when he and fellow Amsterdam skater George Hare were mentioned under the headline, “Youngsters Show Promise.”

“Greater promise than in former years was shown in the junior events. Amsterdam’s George Hare took two firsts in the 440 and 880, and Ted Ellenwood, diminutive skater from Fort Johnson, took both seconds.”

A year later in January 1936, at a district championship event held in Albany, Ellenwood beat Hare, winning the 440 yard intermediate event: though only seventeen, he was no longer considered a ‘junior’ competitor.

Speed skating, incidentally, was quite a serious form of sporting competition then: skaters all across New York and other northern states were members of district leagues, so both Hare and Ellenwood were referred to in newspapers as members of the Fort Johnson Athletic Association, a unit of the larger Mohawk Valley district, and the very professionally-managed Fort Johnson rink was an important location for competition.

The January 13th, 1936 Evening Recorder, for example, informed readers, “The Mohawk Valley championships will be skated at the Fort Johnson rink on February 8th and 9th. Skaters from all the Adirondack communities will compete.”

Each winter, Ellenwood improved. The January 22, 1940 Recorder told sports fans that at the weekend’s Mohawk Valley Skating championship events, “The center of attraction belonged to Ted Ellenwood, the Fort Johnson senior, and to him alone. He turned the day into a nightmare for the competitors in his class, winning the 220, 440, and half mile.”

Ted Ellenwood’s greatest victories occurred during the winter of 1941-42, during which he won five championships and finished in a third-place tie with Otto Freisinger of Chicago in the North American Championships held there. He won the Middle Atlantic and Eastern States titles, as well as the New York State meet at Lake Placid and qualified as number 19 for what would have been the next U.S. Olympic team but for the advent of World War Two. He might not have hung up his skates at such an early age, but he enlisted in the Navy in July 1942, and for the duration of the conflict served in the South Pacific. After his Navy service, Ellenwood perhaps felt he’d aged beyond the point of re-engaging in serious competition, but he kept in the game, if on the sidelines, as the Fort Johnson Athletic Association’s President and speed-skating coach.

Ellenwood married during the war, had a five-month old son, and had just purchased the Fort Johnson gas station when, on June 11, 1946, he decided to play some golf at the nearby Antlers Club with a friend, Lee DeGraff. It was a fatal choice: a terrific lightning storm unfolded as they started the second hole. DeGraff wanted to run for cover, but Ellenwood insisted they finish the hole first. Lightning wasn’t so patient: to quote the Evening Recorder, “Former speed skating champion Ted Ellenwood was struck and killed yesterday at about 3:15 o’clock while playing golf during the tremendous electrical storm that passed over our area uprooting trees and destroying property. Not ten feet away from him was his partner, Lee DeGraff, who was completely unharmed.”