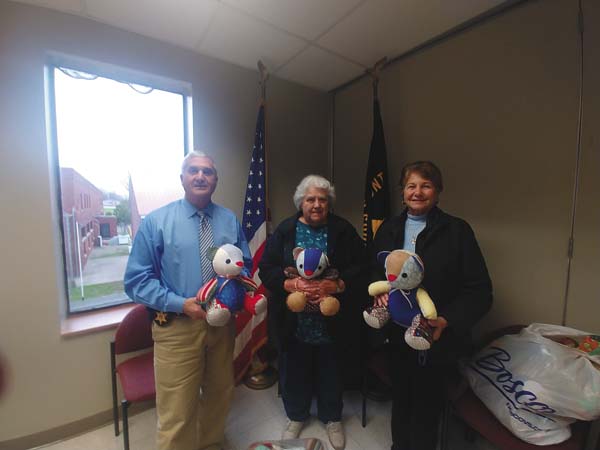 JOHNSTOWN — Two local women recently donated 25 teddy bears they made to the Fulton County Sheriff’s Department to provide to young children at stressful scenes such as accidents, fires, domestic violence or abuse situations.

According to Fulton County Sheriff Richard Giardino, his office was the beneficiary of a “generous donation” of the bears from Gayle Kuehner and Ann Morck.

He commended them for their volunteer service to the community.

“They’ve done this a bunch of times,” Giardino said Thursday.

As not only sheriff, but a volunteer firefighter for over 20 years, he said he really appreciates the donation.

“In accident scenes, it makes a big difference,” Giardino said.

The sheriff’s office issued a news release Wednesday indicating that the 25 teddy bears are distributed to young children to comfort them at accident scenes or other incidents.

Giardino said Kuehner and Morck made the teddy bears with leftover quilt materials. The women have previously donated to other groups, including the Ronald McDonald House, the release said.

The sheriff said many of the ambulance services and local fire departments carry dolls and toys to be used to comfort children. He welcomed this addition for his patrols to be able to give to children to “help comfort and calm them,” he said.

Giardino said every one of the Fulton County Sheriff’s Office patrols has “a number of items” in their vehicles while deputies are out working in the county. He said ambulances are prepped the same way. He said the items, including the teddy bears, are equipped in the emergency vehicles “could be for a number of incidents at home.”

The Fort Johnson resident said she and Morck fund the teddy bear work themselves, although “people give materials” occasionally.

“I just saw the pattern and liked it,” Kuehner said. “I wanted to donate to the Ronald McDonald House.”

She said teddy bears were donated to that charitable cause in Albany, but the women decided to extend their craftiness to local emergency agencies as well. She said the bears have even been provided to appreciative elderly residents too.

“We find that everybody likes them,” Kuehner said.