Teen freshens up the Glove for Eagle Scout service project 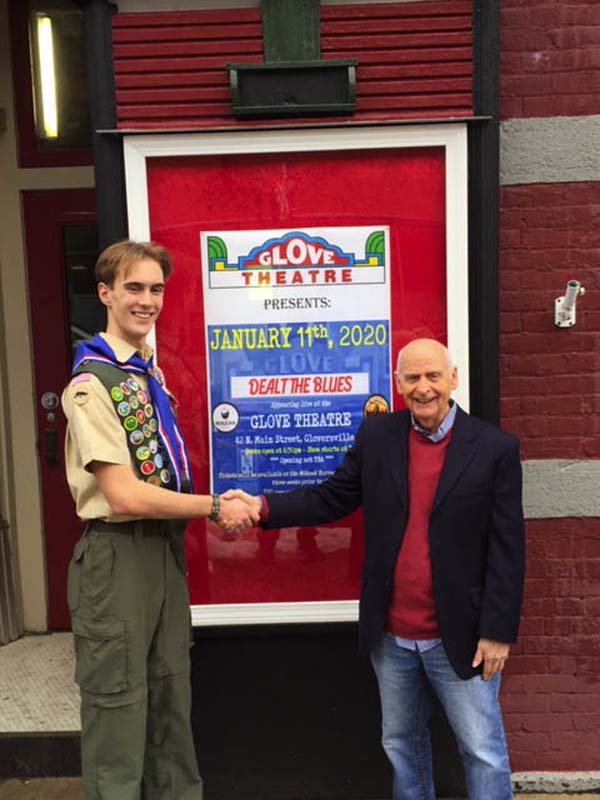 Eagle Scout Benjamin Smouse and Glove Theatre Museum Curator Richard Samrov outside of the museum located next door to the Glove Theatre at 42 N. Main St. in Gloversville. Smouse repaired and repainted the facade surrounding the museum entrance, replaced the carpeting in the exterior exhibit window and rebuilt the outdoor poster display case as part of his Eagle Scout Service Project. (Photo provided)

GLOVERSVILLE — Visitors downtown can now expect to see a fresh pop of color and spruced up exterior displays at the Glove Theatre Museum thanks to the efforts of Boy Scout Troop 53 of Mayfield’s new Eagle Scout, Benjamin Smouse.

Throughout the fall Smouse worked to repair and repaint the museum facade surrounding the entrance, replace the carpeting in the exterior exhibit window and rebuild the outdoor poster display case as part of his Eagle Scout Service Project.

“We estimated it was more than 220 man hours of work,” Smouse said on Friday.

Smouse completed the job in about three months at the end of November with help from his father, siblings and a few close family friends. Planning for the project began roughly two years earlier in 2017 after Smouse met with Glove Theatre Museum Curator Richard Samrov and began discussing his possible involvement in a refurbishment project.

“I’ve participated in theater for much of my life and my family has always tried to be involved with the community and maintaining the city’s history,” the Gloversville native explained. “I met with [Samrov] and we discussed what features of the museum would need to be refurbished and repainted and after meeting with him I began writing a proposal for the project.”

After receiving project approval from the Twin Rivers Council Advancement Committee, Smouse began raising money to cover the cost of paint, primer, brushes, lumber and any other needed materials primarily by sorting bottles and cans. The Glove Theatre also donated paint to support the project that would maintain color consistency between the facades of the historic theater and the museum next door.

Once he had completed the project, Smouse said he felt like a weight had been lifted off of his shoulders.

Samrov expressed pride in Smouse’s interest in completing a project at the museum and commended the Gloversville High School senior’s work.

“He did such a great, great job,” said Samrov. “If you walk past now the window display next to the museum looks terrific. He refurbished it so beautifully.”

Playing off of the new red carpeting in the window display, Samrov said the display area was easy to decorate for the holidays in 2019.

“It means a lot to the Gloversville Theatre Museum to make an impression when people go by,” Samrov said. “I thank the Smouse family for taking on this project and doing such a great job and the Boy Scouts, we appreciate that very much.”

With the service project successfully completed, Smouse was officially granted the rank of Eagle Scout during a ceremony on Dec. 14 held on the third floor of the Glove Theatre building attended by family, friends and mentors who helped him throughout his scouting career.

Smouse, who joined the Scouts around the age of seven, said that it felt strange to finally achieve the rank of Eagle Scout.

“We had always been told that Eagle Scout was an achievement that few people actually reach and it felt strange knowing that I could actually include myself among them,” Smouse said.

Smouse is hopeful that the leadership skills he obtained while working to become an Eagle Scout will support the application he is preparing to submit this month to the U.S. Military Academy at West Point.

“Much of the Eagle Scout project was learning how to budget and manage a project of large scale, as well as being able to lead people to achieve a singular goal,” Smouse said. “It’s a step that will help me with my application to the U.S. Military Academy to help me show that I can demonstrate leadership and be worthy of an appointment to the Academy.”

“I’m hoping to be able to become an army aviator. Flying has always been something that’s interested me, my uncle is a pilot and I’ve always loved being up in the sky,” he continued.

Upon reaching the highest rank in the Boy Scouts, Smouse thanked Scoutmaster Bill Andrist for his continuous support.

“I would like to thank him for always being there to help all of the Scouts and the troop and everyone who has been able to get their Eagle Scout rank,” Smouse said.