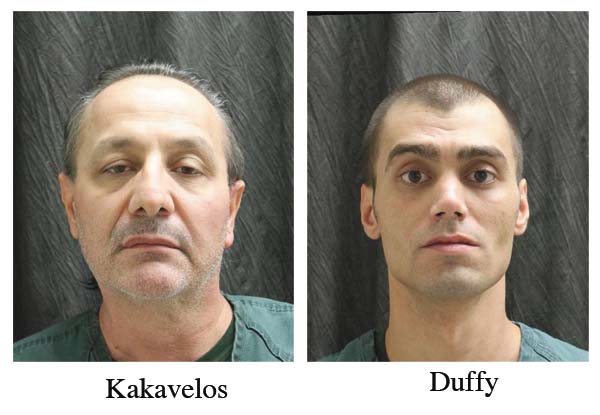 BALLSTON SPA –A 51-year-old Ballston Spa man who is charged with second-degree murder in the death of Allyzibeth LaMont was denied bail after a Saratoga County Court judge stated he could be a flight risk.

Georgios Kakavelos, 51, appeared in front of Judge James Murphy III on Wednesday, where he sought to be released on bail.

The second man accused in the case – 34-year-old James Duffy of Johnstown — also appeared in court Wednesday for a discovery, compliance and readiness conference. His next court appearance is scheduled for 9 a.m. Jan. 30.

Both men have been indicted on charges of second-degree murder, concealment of a human corpse and tampering with physical evidence.

Kakavelos was denied bail by Murphy during his Wednesday morning court appearance after the judge found there was an “extreme risk for flight.”

Kakavelos’ defense attorney, Kevin O’Brien, spoke on his behalf prior to Murphy’s decision, stating that Kakavelos had surrendered both of his passports — since he has dual citizenship in the United States and Greece — and both passports have expired.

“Mr. Kakavelos has been in this county and living in this county for more than 20 years. He is married, he does have children who reside with him. He’s their primary source of income,” O’Brien said. “He has zero criminal history to my knowledge, he’s never had any issues with appearing before any court.”

O’Brien further explained that Kakavelos has had medical issues while in the Saratoga County Jail and those issues have been persistent. He said Kakavelos would receive better medical treatment if he was seen by his doctor.

“There’s also been a delay in his physical therapy from his fall, it is my understanding that he did fracture part of his back. A doctor had advised him he should have been doing it within four days of the accident. It’s now more than a month after that,” O’Brien said.

Saratoga County Assistant District Attorney Al Poremba also commented before Murphy made his decision, stating that Kakavelos is a maximum flight risk and that he has family ties to Greece.

He said the two men allegedly returned the next day when it was dark, and dug a hole for LaMont’s body. They then allegedly poured fertilizer on top of her body and covered it with cement.

“The defendant and Duffy also cleaned up and staged the Local 9 Deli by creating a bigger mess to cover up the crime scene,” Poremba said. “After transporting LaMont’s body in the Volkswagen, the defendant had his Volkswagen detailed and deodorized at a car wash with special emphasis on the trunk area.”

Murphy said although Kakavelos had surrendered his two passports, Murphy determined there to be an “extreme risk for flight,” as Kakavelos could face 25 years to life in prison on the murder charge.

LaMont was last seen on Oct. 28 on Townsend Avenue in the city of Johnstown, near the Local No. 9 Deli where she worked. Her body was found on Oct. 31 in a shallow grave in Malta in a wooded area east of the on-ramp to Interstate 87 southbound Exit 13, on the west side of Route 9. Officials said Duffy and Kakavelos allegedly concealed her buried body by covering it with cement, stone blocks, dirt, mud, vegetation and tree limbs.

The autopsy of LaMont determined she died of multiple blunt force trauma to the head.

State police have said Kakavelos was the owner of the Local No. 9 Deli and Duffy was the manager.

Both men remain held in Saratoga County Jail without bail.