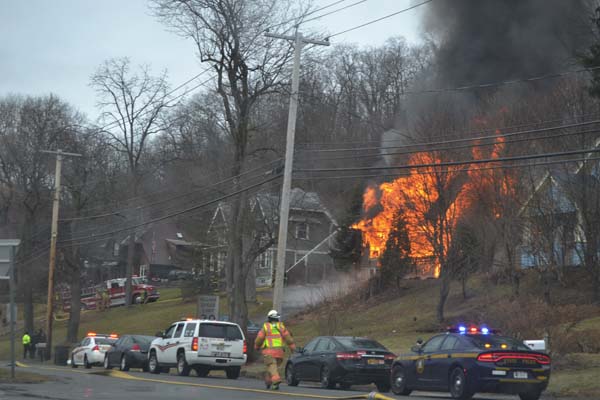 Fire crews work to put out a blaze at a residence on East Main Street in Fort Johnson on Friday. (The Leader-Herald/Eric Retzlaff)

FORT JOHNSON — A home in the village went up in flames on Friday causing the structure to be a total loss, according to fire officials.

Flames engulfed the 69 E. Main St. home in the village of Fort Johnson on Friday morning. No one was home at the time the blaze occurred, said Fort Johnson Volunteer Fire Chief Audie Miller.

He said unfortunately he believes a cat and two gerbils died in the fire.

“It wasn’t the outcome anyone wanted,” Miller said. “Animals are part of the family.”

Upon arrival to the fire, Miller said there were “severe amounts of fire” in the West end of the home. He said upon arrival, their first plan of attack was to stop the fire from spreading.

“We wanted to make sure the fire doesn’t go any further — stop it where it’s at,” Miller said.

He said he is “not completely” sure what the exact cause of the fire was, but does know it started in the North-West corner of the home.

Also assisting at the scene was the town of Amsterdam Highway Department which salted the driveway to the home which was on a hill; and the Montgomery County Emergency Management services that provided an excavator to sift through debris to make sure there wasn’t anything still burning once the fire was out.

Miller said he has “nothing but great things to say” for all the assistance with the fire.

He said the fire company plans to stay in contact with the family to help assist in any way they can.