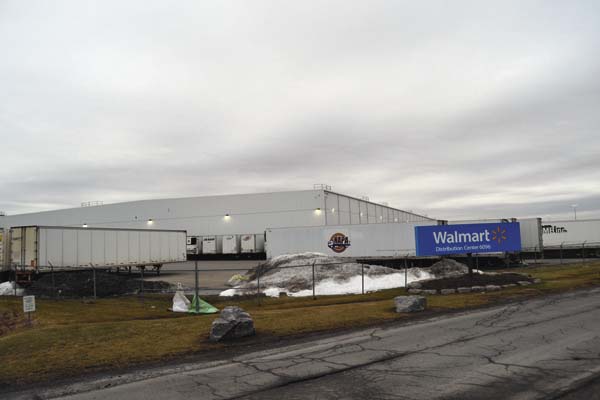 Shown is the Walmart Distribution Center in Johnstown as seen Monday afternoon. (The Leader-Herald/Josh Bovee)

Johnstown Fire Department Chief Bruce Heberer said Monday that the leak was stopped during the 7 1/2-hour incident, from which no one had to be transported to a medical facility.

The fire department was the lead agency responding at 8 a.m. Saturday to the anhydrous ammonia leak at the Walmart Regional Distribution Center, 300 Enterprise Road, at the Johnstown Industrial Park.

According to the Centers for Disease Control, anhydrous ammonia is a toxic gas or liquid that, when concentrated, is corrosive to tissues upon contact. It can cause irritation to the eyes, respiratory tract, gastrointestinal tract, and skin in short-term exposure of less than 8 hours.

“One of the highest production-volume chemicals in the U.S., concentrated ammonia is used in manufacturing, refrigeration, and agriculture as a fertilizer,” the CDC writes.

Heberer said the leak occurred in a compressor in the “electricity” room — an attached, but separately enclosed area of the distribution center.

“It certainly could have been worse, but it was bad,” the chief said.

A news release indicated the fire department received a direct line phone call from the distribution center reporting the possible leak. Upon arrival five minutes later, it was determined the leak was occurring in the “compressor room/energy center” at the southeast corner of the building.

Johnstown Fire Department command met with Walmart officials to gather information regarding “pre-arrival actions” as well as determining any injuries, the release said. Two Walmart employees were evaluated at the scene by Johnstown Fire EMS.

Walmart officials reported an equipment/mechanical failure had occurred resulting in a leak and subsequent vapor release in the building. The immediate area was isolated and all non-essential Walmart personnel were evacuated.

“The plant was physically shut down,” Heberer said.

Upon arrival of the Hazmat response team — in consultation with the Johnstown Fire Department — it was decided that hazardous materials technicians would make a Level A entry to isolate and secure the leak.

During the operation, air quality monitoring on the interior and exterior of the distribution center were continuous. The release said that while readings inside the compressor/energy room were at “dangerous” levels, at no time did levels on the building’s exterior or outside the isolated area present a threat to life safety or environmental quality.

Hazardous materials technicians were successful in stopping the leak and ventilating the immediate area.

Once air quality readings reached safe levels in the compressor/energy control room, the release said the operation was secure. Control of the building was turned back over to Walmart officials, and fire units cleared the scene by about 3:30 p.m.

Montgomery County sent one of their airboats to help with ventilation in the building.