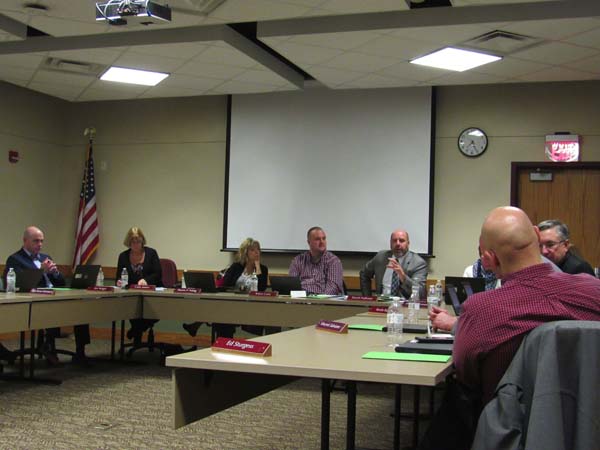 The Gloversville Enlarged School District Board of Education on Monday discussed plans to use just over $1 million in funds remaining from the $37.8 million capital project that was approved by voters in 2015 to replace a portion of the leaking roof at Boulevard Elementary School. (The Leader-Herald/Ashley Onyon)

GLOVERSVILLE — Project managers over the Gloversville Enlarged School District’s $37.8 million capital project, that was approved by voters in 2015, on Monday informed the Board of Education that just over $1 million is still available and proposed replacing a portion of the roof at Boulevard Elementary School with the remaining funds.

Bob Grande of Turner Construction and Michael Andrews of CSArch appeared before the school board detailing conversations with the district’s financial advisor, R.G. Timbs Advisory Group, and district officials over the availability of just over $1 million remaining beyond what was required to cover the scope of the originally planned work.

State building aid was expected to cover 98 percent of the principal and interest costs of the estimated $37.8 million project. The remaining 2 percent of the project cost was to be covered locally through existing reserve funds at no anticipated impact to district taxpayers.

GESD Superintendent David Halloran on Monday said that capital project went “really well,” with bids for some aspects of the project coming in below estimates and limited incidental costs incurred through change orders leading to the remaining funds.

“I give a lot of credit to Turner Construction as our construction manager, really couldn’t ask for much more than what we’ve gotten,” Halloran said.

With such a large amount of state aid project funding still available, Grande related to the board that R.G. Timbs recommended that the district use the remaining funds to perform additional capital project work that would otherwise have been eyed for inclusion in a future capital project.

Grande noted that the district planned to include roof replacements in a future capital project with the warranties on the roofs of most district buildings that were replaced in 2006-07 set to begin expiring in succession in fall 2021.

Roof leaks across district buildings have been a topic for discussion for the school board over the past few years as the district faced challenges from warranty holders and installers while attempting to secure repair or replacement costs.

Andrews noted that both the manufacturer and the installation companies for the district’s roofs have gone out of business and been acquired by other businesses since the work was completed contributing to the issue. He added that work to repair the roofs and add insulation to bring existing roofs up to current energy code caused further issues as the warranty holder argued that additional systems were installed.

The warranty on Boulevard Elementary School’s roof will be the first to expire in September 2021 and is one of the biggest problems for the district, according to Grande, leading to the recommendation that the district use the remaining capital project funds to replace about half of the roof.

“One section at Boulevard last winter had a tarp up there for the majority of the winter,” Grande said.

CSArch would submit the additional work to the state Department of Education for approval this spring with work to be completed between June and August 2021. Grande explained that the roof would still be under warranty for a few months at the time of the project, leading to the possible loss of an estimated $45,000 in state aid still scheduled to be paid out towards debt service from when the roof was replaced nearly 15 years ago.

Halloran related that a conference call with the state Department of Education will take place to discuss the possible addition of the roof project to the previously approved capital project and to seek forgiveness for the $45,000 in state aid for performing replacement early while the roof is still under warranty.

“Hopefully we can convince state ed. that the district has been spending money legally trying to get this rectified, we’re not getting anywhere with it and by the time construction starts you’re talking about six to eight months of a warranty. I would think they would hold us harmless, but I don’t want to speak for them,” Halloran said.

“That roof is not working regardless,” he added. “In the meantime our children and our teachers are working and being educated in a building that is leaking, so we think this is the best path forward.”

The Board of Education raised no objections to pursuing the plan, but questioned whether the district would run into the same warranty issues in the future with the new roof.

“Are we going to be soaked in for another warranty that we’re never going to see anything from, any benefit,” said board member Kevin Kucel.

Andrews said that complete replacement of the roof at Boulevard and other building roofs through future capital projects will leave a single system in place under the warranty of a single manufacturer resolving the issues that arose between manufacturers and installers due to previous patchwork and upgrades.

“Everything gets torn down to the deck, we build back up with a brand new system,” Andrews said. “Every component will fall under the same warranty.”

Halloran noted that the district is eyeing December of this year for a possible referendum on another capital project that will likely include the replacement of leaking roofs at other school buildings.

A committee will be formed later this year to prepare a five year building condition survey to identify possible projects with work expected to focus on safety and infrastructure.

Halloran pointed to full remediation of the playing field at Kingsborough Elementary School for the installation of a bus loop and parking lot over a portion of the field, the installation of secure vestibules at school buildings and measures to improve the traffic patterns at Gloversville High School as areas of focus for the project.

“Whatever we’re doing has to have zero impact on the taxpayers,” Halloran noted.