Kids pose for a picture after a game of broomball at Lapland Lake Nordic Vacation Center. (Photo courtesy of Paul Zahray)

A group of young skiers take to the slope after getting instruction on the opening day of the season in 2018 at Royal Mountain Ski Center. (The Leader-Herald/James A. Ellis)

Scott and Carey McDonald watch as their daughter Lily makes a run down the beginners slope during a family outing in 2018 at Royal Mountain. (The Leader-Herald/James A. Ellis)

A young snowboarder smiles as his instructor checks his gear at the Oak Mountain Ski Center in Speculator. (Photo courtesy of Ethan Marshall and Luke Thomson)

A young skier hits a jump at the Oak Mountain Ski Center in Speculator. (Photo courtesy of Ethan Marshall and Luke Thomson) 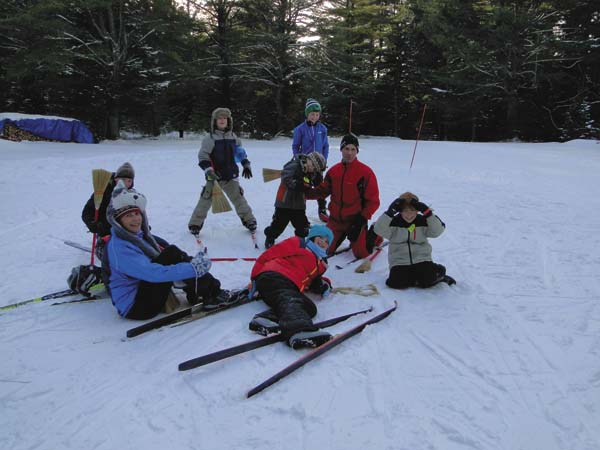 Kids pose for a picture after a game of broomball at Lapland Lake Nordic Vacation Center. (Photo courtesy of Paul Zahray)

With the holiday season now past, and as the grip of winter takes a firmer hold on the region, it’s all too easy for kids to shun the outdoors in favor of their favorite electronic devices as they wait for warmer days to return.

But just beyond the inviting blue glow of their favorite screens are numerous ways for kids to stay active. From down-hill and cross-county skiing, to ice-skating and sledding, and even shoveling the driveway and sidewalk — possibilities abound for kids in the area to get their daily exercise amid the doldrums of winter.

According to Laurel Headwell, director of Fulton County Public Health, children are recommended to get at least “60 minutes of moderate activity” each day. 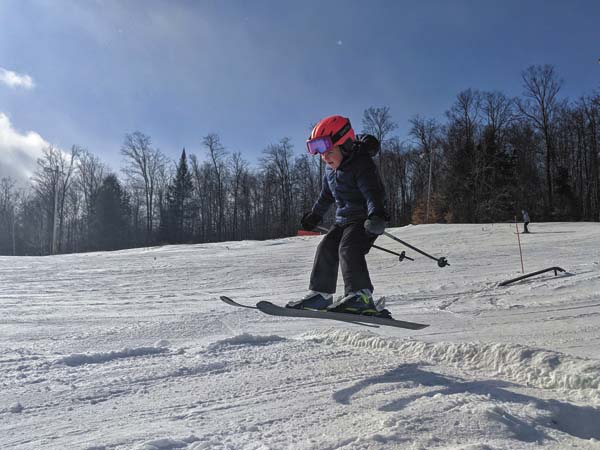 A young skier hits a jump at the Oak Mountain Ski Center in Speculator. (Photo courtesy of Ethan Marshall and Luke Thomson)

In order to stave off these potential ailments by staying active even in the winter, Headwell recommended a plethora of outdoor options as simple as going for a walk, building a snowman or walking the dog.

But now more than ever, there is something standing in the way of kids getting their daily physical activity: electronic devices.

“Electronic devices are a controversial topic, especially when it comes to the diminishing amount of physical activity,” Headwell said.

Headwell said that while electronic devices are often useful interactive tools for children — sometimes even helping to track and encourage physical activity — the problem is often the all-consuming nature of such devices.

“The negative is that our devices can also consume our time,” Headwell said. “We spend more time ‘scrolling’ rather than being active.” 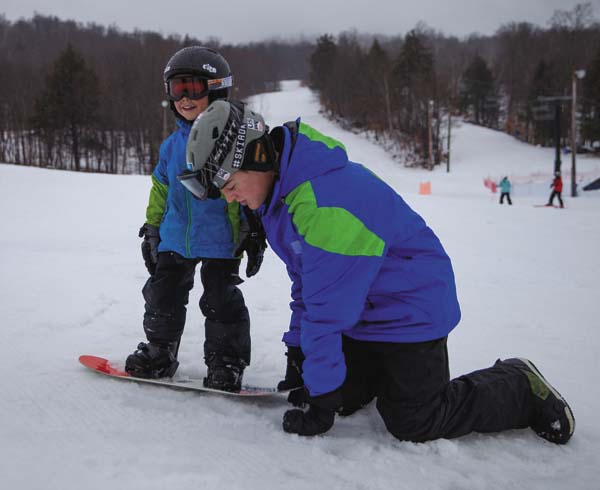 A young snowboarder smiles as his instructor checks his gear at the Oak Mountain Ski Center in Speculator. (Photo courtesy of Ethan Marshall and Luke Thomson)

Headwell said that the best way for adults to prevent their children from being overly consumed by their electronic devices is to be proactive in limiting where and when and how long kids can use their devices and also to lead by example in promoting healthy physical activity.

“Easy steps [to take are] don’t have electronics in the bedroom, do not allow electronics at the dinner table. Limit screen time and also implement an amount of time to be outside,” Headwell said. “The best advice is to be interactive with kids. If you set the example, they will follow. Let imaginations run wild, take a hike, go on an adventure be present in the activity.”

For Paul Zahray, owner of Lapland Lake Nordic Vacation Center in Benson, cross-country skiing is an ideal form of winter activity for children.

“It’s an affordable and accessible sport,” Zahray said. “It helps kids stay active in the winter, and really it can be a lifelong activity, not just one that you do in one’s youth. There’s a lot of people here that have probably been doing it for 60 or 70 years. It’s very good exercise and I think it’s also a good character development kind of exercise, realizing that you can ski up a hill as well as down it.” 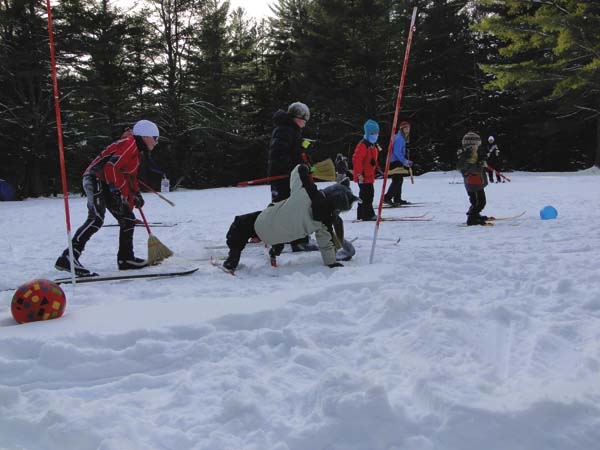 “Basically we start the lessons and organized kids activities at the age of five,” Zahray said. “Typically we have a group of probably five to fifteen. We have one that we call a kids club, and then we have another one in the afternoon that we call reindeer rally, which is really more focused on playing games on skis. Broomball is a popular game.”

Zahray said that there is some potential for kids to be drawn away from activities like cross-country skiing due to electronic devices, but that for the most part youth participation remains strong.

“Certainly I think with cross country skiing there is competition from the video games and the virtual world,” Zahray said. “But I think participation and interest continues to be strong, and I think as long as we have snow cross-country skiing is going to be a big part of our lifestyle in this region.”

Laura O’Brien, VP of marketing and sales at Oak Mountain in Speculator, also said there is the potential for diminished interest in skiing due to electronic devices.

“The town of Lake Pleasant pays for their kids to ski free [at Oak Mountain] Christmas week, and there weren’t a lot of kids that utilized it and it’s unfortunate,” O’Brien said. “And I was thinking, ‘How many of those kids are probably sitting at home on their devices rather than coming up?’ So it is a challenge and it’s a problem for every ski area, not just us. Somehow we have to get them to put those devices down and come enjoy the fresh air. But the more fun things that we can do and offer, the more maybe we will draw them away from their phones.” 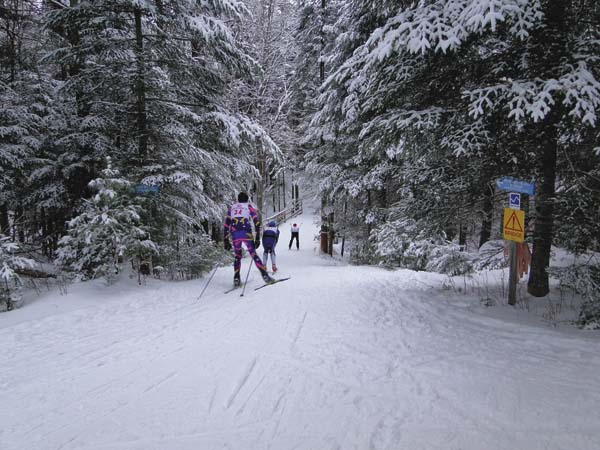 One way Oak Mountain is attempting to draw youths away from their phones and onto the slopes is by utilizing the technology to its advantage. Each week, Oak Mountain runs a post on Facebook asking the simple question: “Did you learn to ski at Oak Mountain?” Each post features a young skier or snowboarder who started out at Oak Mountain.

“It’s a promotion that we do. We started it two years ago and we just keep collecting more and more people,” O’Brien said. “Where it stems from is that we are that learning mountain, and we’re a generational mountain. There’s so many people that learned here, and so many people that taught other people here. So the goal is just to keep that whole history of Oak Mountain going.”

O’Brien said that Oak Mountain is an ideal place for kids to learn to ski or snowboard because of its size and because of the skills of the instructors.

“It’s a small, safe, happy mountain. Everyone looks out for each other,” O’Brien said. “There’s only one place to end up at, and I like to think that our staff is pretty happy and welcoming and they love what they do here. So people feel that vibe. I think it’s the overall atmosphere of feeling welcome and happy.”

Oak Mountain offers group and private lessons for youths and adults, and they also feature lollipop races and treasure hunts to keep kids interested and involved in the outdoor activity. 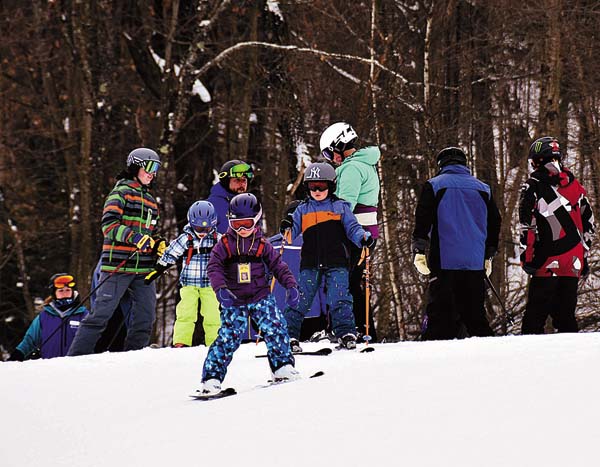 A group of young skiers take to the slope after getting instruction on the opening day of the season in 2018 at Royal Mountain Ski Center. (The Leader-Herald/James A. Ellis)

“It creates a happier kid, that’s for sure,” O’Brien said. “I know personally, when my kids are cooped up inside, they’re grumpy and they get aggravated easily and their brains are all over the place. But generally you see so much more laughing, smiling kids. [Skiing] also helps with physical fitness, not only just to be happier but to make sure they’re not becoming a couch potato.”

For Jim Blaise of Royal Mountain in Caroga Lake, the appeal of skiing and snow boarding in youths is actually growing, despite the influence of electronic devices.

“I’m surprised myself to see that it’s actually growing,” Blaise said. “We used to start kids out at five. Now we’re seeing kids at four, three — we even have two year olds [out on the slopes].”

Blaise said the growing popularity of skiing and snowboarding in the area, has made even getting into the mountain’s various learning programs — including the Trail Blazers class — difficult to do.

“It’s actually a stretch just to get into it,” Blaise said.

Blaise that the outdoor activity has numerous benefits for kids.

“Just being outside and the energy level the kids have [is wonderful] and obviously they’re getting exercise. It’s just a great place to be,” Blaise said. “Me personally, I love it outside. I don’t think there’s a better activity you could have.” 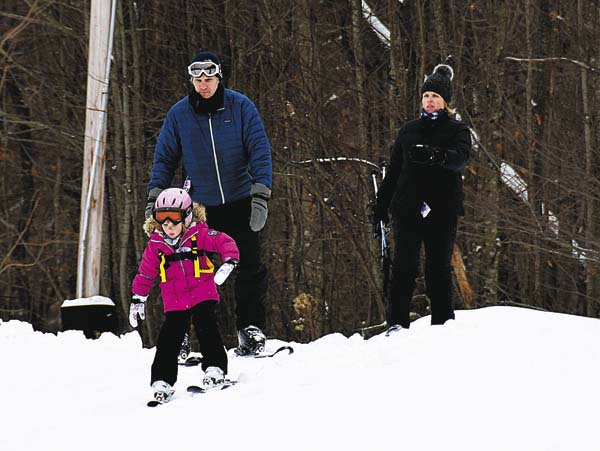 Scott and Carey McDonald watch as their daughter Lily makes a run down the beginners slope during a family outing in 2018 at Royal Mountain. (The Leader-Herald/James A. Ellis)