JOHNSTOWN — City officials haven’t yet finalized a proposed roughly $2 million bond for city projects and equipment, as one question remains whether the city should purchase another ambulance.

Officials say they are waiting to see what Fulton County government does with EMS services in the immediate future.

The city’s new Johnstown Fire EMS unit maintains one used ambulance as part of its medical service in the city. The unit was begun last year after two area ambulance services shut down.

City Treasurer Michael Gifford said Thursday the city is still putting together its bond package which was discussed extensively in 2019.

“That has not been done,” he said.

Gifford confirmed that purchase of a second ambulance for the fire department is part of the proposed bond package. A question remains whether the city should bond for it. Gifford said the question is whether another city ambulance should be included in the bond with “so much talk that Fulton County is doing something.”

“If they’re going to do something, you don’t want to dive into something,” Gifford said.

Fire Chief Bruce Heberer, who couldn’t be reached Thursday, last year estimated that the cost of a new ambulance might be about $200,000.

Fulton County has been considering doing something about the EMS/ambulance situation since early last year. The county is trying to decide whether it is feasible to assume operation of all ambulance service in the county, a situation precipitated by closures. Gloversville-based Ambulance Service of Fulton County shut down Feb. 8, 2019. The Johnstown Area Volunteer Ambulance Corps shut down March 16, 2019. Regular day-to-day ambulance calls with advanced life support have been handled by the Greater Amsterdam Volunteer Area Ambulance Corps, with other area calls handled by the Johnstown Fire EMS unit , and other regional services.

The county is considering obtaining a Certificate of Need from the state Department of Health.

Officials say that if the county decides to assume all EMS, and secures proper documentation, its CON would supersede or have preference over any current scheduling of ambulance operations currently going on in the county. It would allow Fulton County to sit down with organizations such as GAVAC and work on a county-guided, controlled plan moving ahead.

Meanwhile, Gifford said the approximately $2 million city bond issue is still being tweaked, with remaining questions about certain elements before it can be issued.

“It won’t happen this month,” the city treasurer said.

The city since last summer has been developing a list of potential bondable items that the city can borrow for without having to make the items part of the regular city budget. 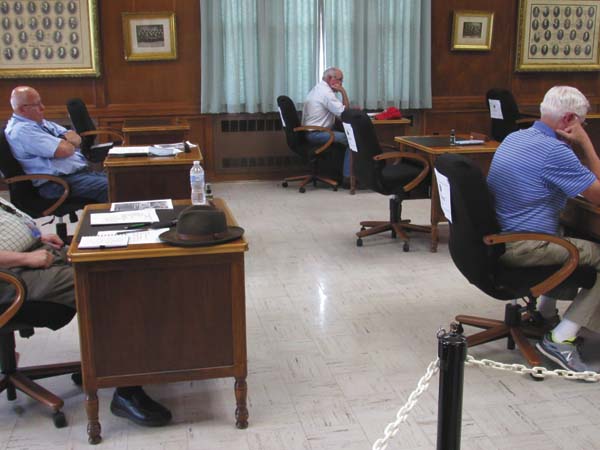