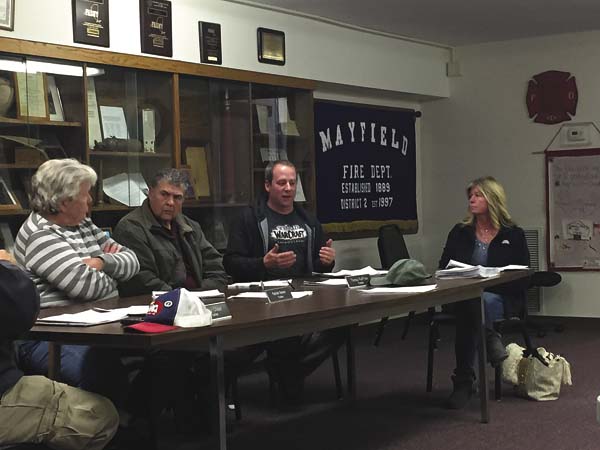 MAYFIELD — Village officials spoke highly of the opening for the Mayfield Community Park at their meeting Nov. 13.

The park, which opened Nov. 10, holds a memorial garden and nature trail. Jamie Ward, village mayor, said 180 people joined him and other village officials at the opening.

“The Mayfield Community Park grand opening was an amazing success. And it couldn’t have [been] a better display of our community,” Ward said.

Ward said Lakeside Rentals owner, John Papa, donated $1,000 to open a trailhead for the walking path on the lake, unofficially called the “Mayfield Nature Trail.” The funds will be used in spring 2020 to break ground for the nature trail. He and Village Clerk Terri Brusker are looking into what monies are available for the trail.

“[The nature trail] would be great for the people of Mayfield and [could] maybe bring in some tourism,” Ward said. “Anything we can do to make our lake more desirable, lets do it.”

The park also holds a memorial garden which bears a granite memorial plaque for Paul Wilde, a past village trustee and long-time resident. He said the garden will be a place to remember the people of Mayfield, and he dedicated a plaque for his mother, Fran Ward.

“I don’t want to make this the central park of the Northeast, but anything we can do or acquire to make our lake community beautiful, let’s do it,” Ward said.

In other news, the board passed a real property tax exemption sliding scale to those 65 years of age or older who own real property in the village of Mayfield. Interested residents have until March 1 to apply for such exceptions. Ward said by implementing this, the village will be in line with current county and municipalities that are doing the same.

The village also announced its Christmas Tree Lighting would be on Dec. 14. Brusker said the evening will start with a parade from the high school and Santa will light the tree with Ward. Brusker said they installed a new tree in November.

“For the first time, in a very long time, we have a band in our parade and I’m extremely excited about it” Ward said.

The village board meets at 7 p.m. every second Wednesday of the month.