Snowfall totals varied vastly in area, 16 to 24 in. 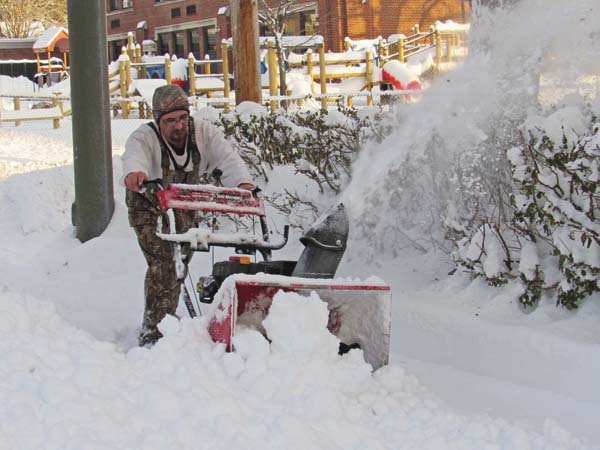 Phillip Oare of West Fulton Street in Gloversville snow blows around his home this morning. (The Leader-Herald/Michael Anich)

GLOVERSVILLE –This season’s first big snowstorm dumped 1 1/2 to 2 feet of snow on Fulton and Montgomery counties the past few days, but authorities said it caused few problems as far as snow removal and accidents.

He said he conferred with various highway superintendents during the course of the storm. He said they universally reported no major problems with snow removal carried out methodically over 48 hours. He said there were some minor motor vehicle accidents.

“We had a lot of cars off the road, but no serious injuries,” Fulton County Sheriff Richard Giardino said today. “There was nothing unusual.”

Gloversville Department of Public Works Director Dale Trumbull said today that snow removal generally “went well,” although the snow started with an intense burst on Sunday. He said his crews made three passes through the city.

Trumbull said that for the most part, city residents worked with DPW, although some residents still threw snow into the street. He said some complaints were received such as snow being pushed onto sidewalks by DPW and complaints regarding sand.

Area public school districts were closed Monday because of the inclement weather, after the Thanksgiving weekend hiatus, and most were on a two-hour delay this morning. Fulton-Montgomery Community College this morning pushed their delay to three hours.

No major power outages were reported in the area.

Santa Maria said one storm-related issue was reported this morning — a tree down on Bemis Road in the town of Mayfield.

The snowfall the region experienced in various intervals Sunday through late Monday appeared to be light snow, giving way to sunny skies and cleanup this morning.

Albany-based National Weather Service meteorologist Jennifer Vogt today said the late fall snowstorm that swept across the Northeast originated in the Midwest and basically came from a huge low pressure system that slowly moved toward the east. She said the storm by this morning was out of New York state, but continued to linger in Rhode Island and parts of Massachusetts.

Vogt didn’t have any snowfall totals for the city of Gloversville, but said the city of Johnstown received about 16 inches. Elsewhere in Fulton County, Broadalbin had 18 inches, Stratford had 17 inches and Perth had 16 inches.

Montgomery County had higher snow totals, with Vogt reporting both the city of Amsterdam and village of Fonda each received 22 inches.

Other parts of New York state were left in worse shape. Gov. Andrew Cuomo declared a state of emergency in Albany, Columbia, Greene, Rensselaer, Schenectady, Saratoga, and Ulster counties due to the storm on Monday. About 300 members of the National Guard were activated to assist with snow removal and clean-up operations in those counties.

This year’s holiday season came in strong with a major snow storm that accumulated approximately 18 to 24 inches of snow throughout Montgomery County.

Heavy snow fall began Sunday afternoon and continued until Monday night. And as the snow continued to fall, the departments of public works and departments of transportation throughout the county worked to plow the snow covered streets and keep community members safe.

Sager said throughout the county there were no major car accidents or any other serious snow-related emergencies.

He said there were a few cars that went into ditches, and a few fender benders, but nothing serious.

“We were pretty fortunate,” Sager said.

In an event such as a snow or ice storm that causes dangerous driving conditions, Sager said to stay home and off the roads if there is no need to travel.

“If you do have to go to work, slow down, leave time to get to your destination and pay attention,” Sager said.