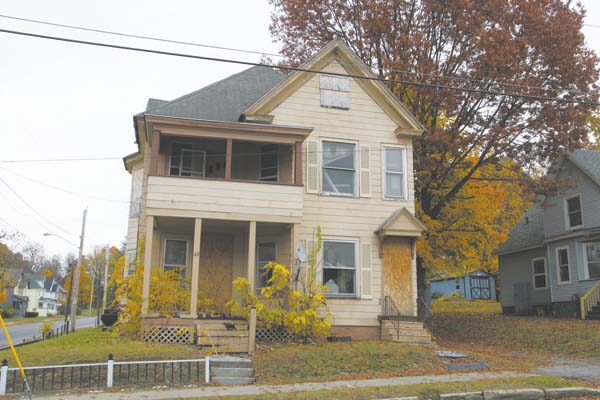 69 S. Judson St. in Gloversville is one of the 10 homes scheduled to be razed. (THe Leader-Herald/Patricia Older)

GLOVERSVILLE — The Common Council on Nov. 26 approved a local law authorizing the city to accept the conveyance of 10 deteriorating tax foreclosed properties from Fulton County. The city plans to raze the properties that have been idling on the county’s backlogged demolition list.

City and county officials have been working together throughout the year to address deteriorating properties in the city that have been acquired by the county through tax foreclosure.

The county was authorized to assume property tax collection and enforcement on delinquent city properties through an intermunicipal agreement in 2004. The county established Operation Green Scene in 2007 to address dilapidated government acquired properties that are unlikely to sell in public auction due to their condition.

These deteriorated properties are removed from the annual county auction list and placed in the custody of the county Department of Solid Waste until they can be taken down by the Fulton County Demolition Team which operates in the city and other municipalities.

The city earlier this year approached the county seeking to acquire the 10 worst tax foreclosed city properties awaiting demolition to hire an outside contractor to perform the work at the city’s expense to cut the list of city properties waiting to be torn down by the county team nearly in half.

The Fulton County Board of Supervisors on Nov. 12 approved a resolution authorizing the conveyance of the 10 county owned properties to the city for $1 each and waived the municipal county demolition tipping fee.

The Common Council on Nov. 26 approved a local law accepting the conveyance of the properties following a public hearing during which no members of the public spoke. Mayor Vincent DeSantis said he would deliver a check from the city to the Fulton County Office building to complete the transaction on Nov. 27 hoping that the deeds would swiftly be signed and filed in the county Clerk’s Office.

The Common Council on Oct. 22 awarded a $179,190 bid to Jackson Demolition to tear down all 10 properties. Fire Chief Thomas Groff on Nov. 26 said he would contact Jackson to schedule the demolition once ownership of the properties has been transferred.

“As soon as we have the 10 buildings I can get a hold of Jackson they would probably start working on those,” Groff said.