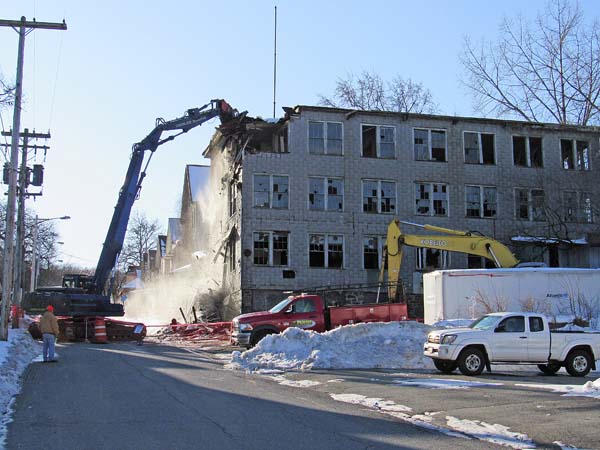 GLOVERSVILLE — City leaders accomplished a longtime goal on Wednesday morning when demolition of the former Ultimate Leather building on Division Street got underway.

Throughout the year the Common Council worked to acquire the former Ultimate Leather glove factory building at 70 Division St. to demolish the long vacant 18,500 square foot building located in a residential neighborhood.

On Wednesday at 8 a.m., Pareene Contracting began taking the building to the ground. Mayor Vincent DeSantis reported during Tuesday’s Common Council meeting that due to the lateness of the season, debris from the demolition will remain on-site, covered by Pareene until it can be hauled away by the Fulton County Demolition team in the spring.

“It’s dangerous as it stands. Once it’s in a pile and covered and the cover is secured it will be still an eyesore, but not a public safety hazard, so we’re very happy to finally be able to do that,” DeSantis said. “We hope as soon as the snow starts going away we will get the county to take it away.”

The city issued a request for proposals for the demolition work in the spring and contracted the lowest qualified bidder, Pareene, to perform the demolition for $15,000. The razing is expected to take no more than two days. The demolition debris will be removed by the Fulton County Demolition team. The city will pay a reduced county tipping fee.

The Common Council this year pursued demolition of the Division Street property that Fulton County began the tax foreclosure seizure process on in 2016 for delinquency, but ultimately declined to take ownership of over liability concerns.

The county subsequently filed certificates of withdrawal, cancellation and prospective cancellation to remove the property from the tax rolls without taking ownership.

Earlier this year, the city identified the owner of record and contacted the man, described as an elderly resident of Tennessee without the means to remedy the situation, expressing interest in acquiring the structure pursuant to demolition.

The owner granted the city permission to enter the building to perform environmental assessments to determine whether demolition was feasible. The returned reports concluded that the building was clean and the council approved a local law to acquire the property for $1 in September.

The city finally received the title to the property last week, clearing the way for this week’s demolition.

“It’s been a long haul,” DeSantis said expressing enthusiasm over the prospect of finally seeing the building torn down. “I really feel that these derelict, abandoned structures that we have in the city are one of the main things that are a barrier between us and real revitalization.”

DeSantis went on to thank Fire Chief Thomas Groff and City Attorney Anthony Casale for their respective roles in coordinating each stage of the environmental review, demolition planning and property acquisition process.

“Without them we would never be in a position to be able to take this building down,” DeSantis said.