Can the Woolly Bear caterpillar be predicting a warm winter? 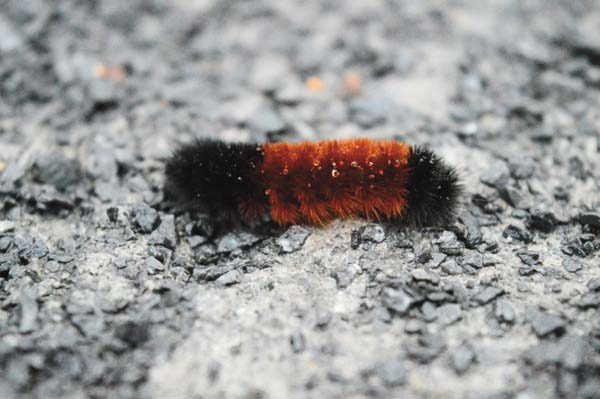 A Woolly Bear caterpillar, rumored to have the ability to predict the winter weather, crawls along a trail in Tupper Lake on Tuesday. (Adirondack Daily Enterprise/Aaron Cerbone)

TUPPER LAKE — A Woolly Bear caterpillar crawling along the ground on Tuesday says that the warm weather that melted most of the snow Monday night might return sooner than later. That is, if you believe caterpillars.

The myth that these fuzzy moths-to-be can predict the winter weather has been in American folklore since colonial times, possibly pre-existing Groundhog Day, which formally dates back to 1887.

The myth goes, the more rust-colored the caterpillar, the milder the winter. Woolly Bears have 13 segments to their bodies, each colored black or brown. This one appears to have five segments (and a little more) that are rust-colored, indicating an uneventful forecast for the next five months or so.

However, the U.S. National Weather Association states there is no association between the color of caterpillars and the coming winter weather.

This myth became lodged in modern public consciousness in 1947 when Howard Curran, the curator of entomology from the American Museum of Natural History, conducted a small study of 15 caterpillars at Bear Mountain State Park in southern New York with his wife and friend from the New York Herald Tribune in tow.

His winter prediction in the Tribune made national headlines and according to the Missouri Department of Conservation, “That winter, New York state experienced its worst snow storm in 76 years.”

By the 1950s Life Magazine had dubbed the furry crawler a “Woolly Weather Prophet.”

Over the next eight years Curran continued his study with his wife and friends who formed The Original Society of the Friends of the Woolly Bear. According to the Old Farmer’s Almanac, he found an average of 5.3 to 5.6 rusty segments, with correlating mild winters each year.

After several years of mixed results Curran lost faith in his hypothesis, but his myth stuck around.

Woolly Bear caterpillars are strongly linked with the winter months. The NWA says that they can survive temperatures as low as -90 degrees Fahrenheit and can survive a winter frozen in an ice cube.

Its wool coat has little to do with this, though. It survives by producing a cryoprotectant called glycerol, which is like a natural, sugar-based antifreeze which protects the interior of its cells from freezing.

The Woolly Bear’s coat may still be influenced by the weather, but instead of predicting the future, it is a look into the past. The longer one lives, the longer its brown hair band becomes, so if Woolly Bear caterpillars are exiting hibernation early in the spring, by the fall they will show the signs of a mild end to the winter.

Variations of Woolly Bear weather myths also exist around how thick a specimen’s coat is or which direction it is traveling (south if it will be a cold winter). This one was trotting north-east.

Was Dr. Curran’s caterpillar forecast correct? Only time will tell.

BPCSD BOE to meet on Monday