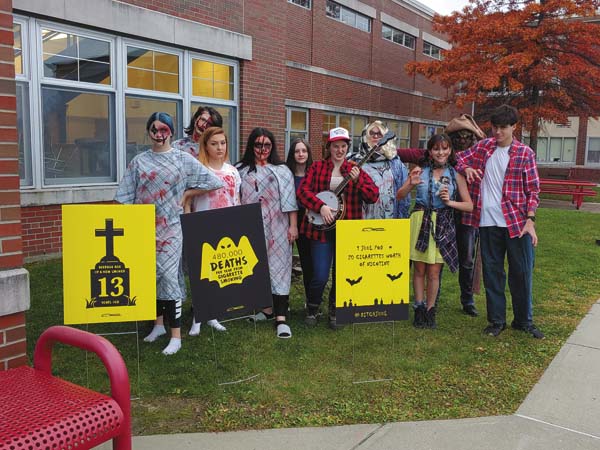 BROADALBIN – The Students Against Destructive Decisions — SADD — group at Broadalbin-Perth High School recently presented its annual Haunted House. In addition to offering a frightening fun time, the SADD group partnered with Reality Check to bring awareness to the problem of tobacco retail marketing and its impact on youth tobacco use.

Because tobacco marketing is a proven cause of youth smoking, these students are raising awareness and encouraging community members to stand up to eliminate tobacco marketing and advertising in places where youth can see them. The goal is to put an end to youth smoking and other tobacco use and create a tobacco-free generation, a news release stated.

The SADD group placed lawn signs highlighting facts about vaping and tobacco use and tobacco marketing at the entrance to the haunted house. The signs featured spooky graphics to coordinate with Halloween but also to emphasize the scary nature of some of the facts, such as there’s as much nicotine in one Juul pod as there is in a pack of cigarettes or stores near schools contain nearly three times the amount of tobacco advertisements.

According to the U. S. Surgeon General, “advertising and promotional activities by tobacco companies have been shown to cause the onset and continuation of smoking among adolescents and young adults.” The activities are part of the overall statewide “Seen Enough Tobacco” initiative.

Findings on youth tobacco use and tobacco industry marketing in places where children and young adolescents can see them indicate: 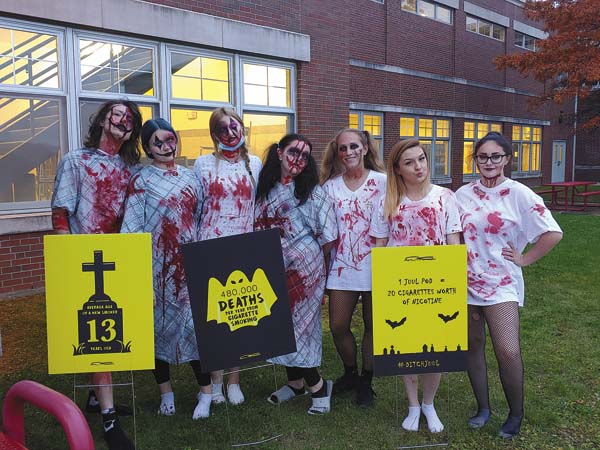 ∫ The average age of a new smoker is 13 years old, and 90 percent of adult smokers say they first tried smoking by age 18.

∫ The U.S. tobacco industry spent an estimated $9.5 billion on advertising and promotion of cigarettes and smokeless tobacco in 2013. This includes nearly $220 million annually in New York state, or nearly $602,000 a day.

Reality Check of New York empowers youth to become leaders in their community by exposing what they see as the manipulative and deceptive marketing tactics of the tobacco industry. The organization’s members produce change in their communities through grassroots mobilization and education. Reality Check is part of the Advancing Tobacco-Free Communities statewide grant, which is funded by the state Department of Health’s Tobacco Control Program. The NYS Tobacco Control Program is made up of a network of statewide contractors who live and work in the communities they serve. Locally the grant is held by Catholic Charities of Fulton and Montgomery Counties. Since 1976, Catholic Charities has served area residents by providing services such as substance abuse prevention, food pantry, domestic violence advocacy and dispute mediation. 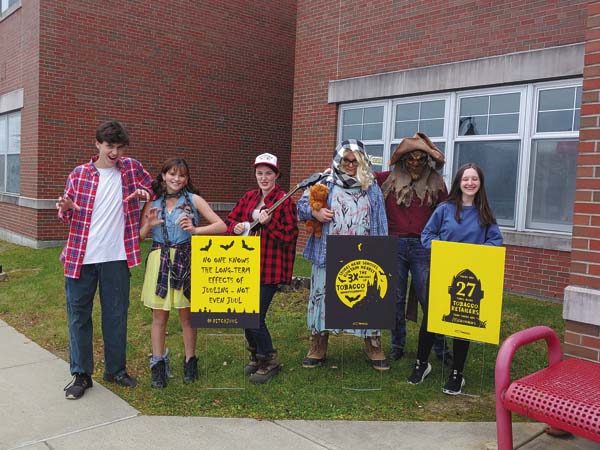