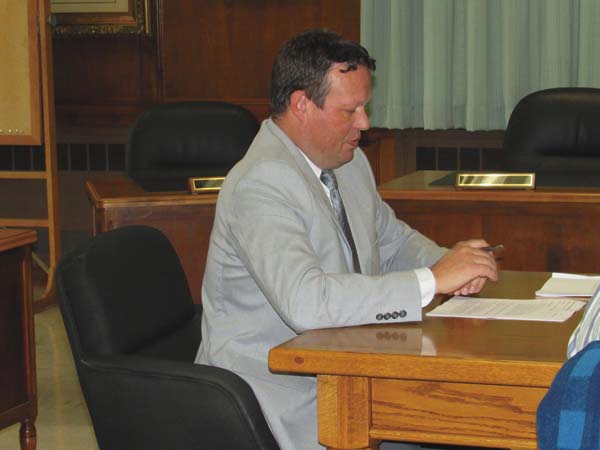 Fulton County Planning Director Scott Henze discusses an intermunicipal sewer agreement between the county and the village of Broadalbin with the Board of Supervisors' Public Works Committee recently at the County Office Building in Johnstown. (The Leader-Herald/Michael Anich)

JOHNSTOWN — A proposed intermunicipal agreement involving sewer service operation/maintenance between Fulton County and the village of Broadalbin was recently approved by county supervisors.

The Board of Supervisors’ Public Works Committee voted at the County Office Building authorizing board Chairman Jack Wilson to execute an intermunicipal agreement with Broadalbin. The $14,760 agreement is for wastewater pump station operation and maintenance services in Fulton County Sewer District No. 2 in Vail Mills.

Bellamy Construction was awarded a $1.4 million base bid in 2018 for the project. The firm ceased working in November 2018 for winter, resuming in May and issuing a “substantial completion” on Oct. 1, with exceptions and punch list items identified.

Henze said he anticipates the project to “hopefully” be completed by the end of November.

As part of the original June 8, 2018 intermunicipal agreement, the county and village agreed that the village would take over ownership of all sewer infrastructure installed by the county after a one-year warranty period expires. Once sewer connections are made to the collection system and the pump station is operational, Fulton County is responsible for operation and maintenance of the pump station during the one-year warranty period.

He recommended a contract with the village of Broadalbin, which the full board will vote on Nov. 12.

In a related matter, the committee passed a proposed resolution approving $3,000 in funding for electric service to the new sewer district’s wastewater pump station.