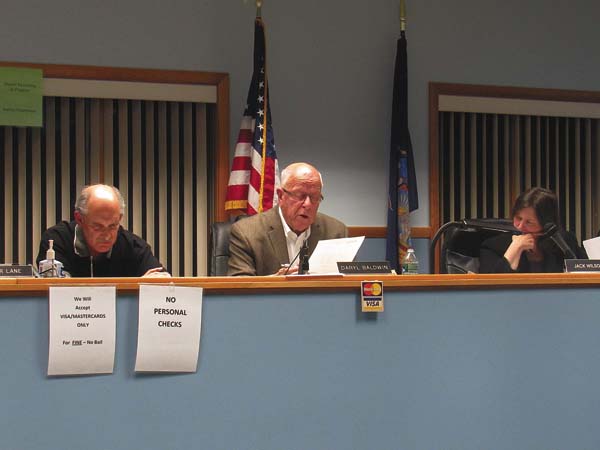 JOHNSTOWN — During its regular meeting on Monday, the Town Board discussed the need to replace a pump station in the city of Gloversville that is rusted and leaking water.

Supervisor Jack Wilson said the pump station at Wesskum Woods Road in the city of Gloversville has been leaking water and affecting residents is part of the town’s infrastructure, but city does maintenance on it.

“The entire unit up there is leaking water very bad and it requires constant attention,” Wilson said. “It needs to be replaced. The pipes are all rusted out.”

He said there is also a fire pump that is not working properly.

Wilson said the Gloversville Water Department recommended the pump be replaced and sent the town the estimated cost from Emmons Metro LLC to replace it.

To replace the pump it would cost $72,995 along with a $7,000 charge to install, commission and wire the pump, and a $1,375 charge to ship the pump to Gloversville. Wilson said the water department suggested going with a stainless steel piping that would add an additional cost of $3,499.

The part would take three months to be built at the factory, he said.

Leah Everhart said unless it was an emergency to replace the pump, the town would have to follow state bidding laws.

Wilson said the price from Emmons Metro LLC is the lowest price. However, Everhart said the town would be going against bidding laws if they were to accept it.

“If this is not an emergency situation, the step tonight would be to advertise for bids,” Everhart said.

Councilman Walter Lane said between now and three months from now there is the possibility the pump could quit and would leave residents without water until that pump is fixed.

Wilson said the town would meet this week with the water department to determine whether it is an emergency situation or not.

“If you were to walk into that building there’s water running all over the place,” he said.

Wilson said pipes are all rusted through.

Everhart said if it is determined an emergency, they can move forward without advertising for bids.