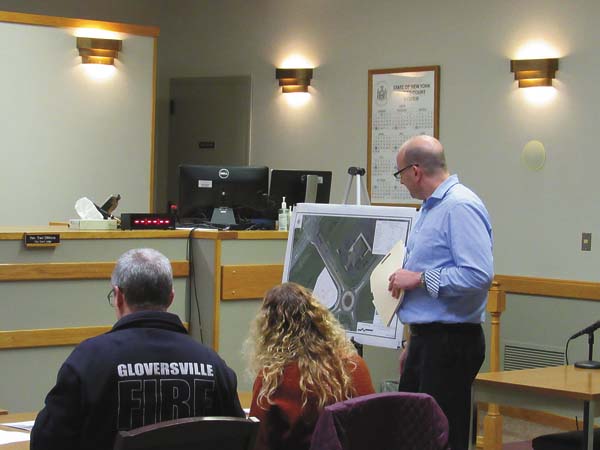 Chris Boyea of Bohler Engineering presents a concept plan for The Dartmouth Company's proposed construction of an urgent care center on South Kingsboro Avenue Extension in Gloversville on an undeveloped lot located on the roundabout in front of Walmart to the Gloversville Planning Board on Tuesday. (The Leader-Herald/Ashley Onyon)

GLOVERSVILLE — The city Planning Board on Tuesday reviewed a concept plan for the proposed construction of an urgent care center on South Kingsboro Avenue Extension on an undeveloped lot located on the roundabout in front of Walmart.

Chris Boyea of Bohler Engineering and John Roche of The Dartmouth Company presented early details on the proposed urgent care facility, seeking feedback from the Planning Board before investing resources in developing full design plans.

“Just to gain your feedback, thoughts and ideas on the overall layout, how it’s situated and the proposal that we have here so that we can incorporate those comments into the full plan set when we return and hopefully make this as efficient as possible by incorporating the comments right up front,” Boyea said.

Boyea noted that the 42,000 square foot lot that does not conform with city zoning standards was created when the First Choice Financial Federal Credit Union property was physically divided during construction of road improvements to support the Walmart.

“It’s fairly small in size, so it’s pretty limited as to what the uses could be here. It’s less than an acre and we’ve got a use that fits in really well there,” Boyea said. “The Dartmouth Company is proposing to make a pretty sizable investment here.”

The urgent care center would be situated in a single story building of approximately 3,500 square feet serviced by about 30 parking spaces. Driveway access to the building would be located on South Kingsboro Avenue via an existing curb cut.

Boyea said the initial concept appears to meet the city’s standards for setback distances, meaning a variance should not be required. He pointed to a downhill area of the site as a possible location for stormwater treatment measures.

“That will be on the next submission,” Boyea said.

Planning Board Chairman James Anderson pointed to the location as an ideal site for an establishment that would generate sales tax revenue, pointing to the business park on neighboring Van Road just off the Kingsboro Avenue Extension roundabout as a more appropriate location for the urgent care center.

“This is in front of Walmart,” Anderson said. “This is sales tax region.”

Boyea noted that the urgent care center would be a for profit business that would pay full property and school taxes associated with the site, saying the developers would not seek any Payment in Lieu of Tax Agreements or other tax reductions for the site.

Additionally, Boyea said the non-conforming nature of the lot would prevent most retail establishments from occupying the space.

“We’ve confirmed that nobody has proposed anything since this lot’s been created. You wouldn’t be able to get a return on investment. You can’t fit a McDonald’s here, you can’t fit an Arby’s here, you can’t fit a Dunkin’ Donuts here, it’s too small. So we’ve found a for profit business, full pay taxes and it’s a great fit for the lot in the shape that’s there,” Boyea said. “This is a well funded organization that wants to have a location here in the city.”

Alternate board member Frederick Bochenek, filling in for the absent Jonathan Kluska ,argued that locating a healthcare business outside of the city proper would go against the city’s comprehensive plan that seeks to bring residents and non-residents into the city for services potentially generating revenue at other businesses as consumers pass through.

“The comprehensive plan of Gloversville wants industrial or any type of business like this in the city area, not outside the parameters of the city,” Bochenek said. “If it was located downtown those people would go to this building, they may come out, they may partake of other businesses within walking distance of the building and create revenue for those other businesses. They’re not going to create revenue here.”

Boyea pointed out that patients visiting urgent care facilities are generally not making a scheduled visit to a physician, saying these individuals will typically visit an urgent care center once or twice in their lifetime in need of immediate medical attention.

“They’re usually coming to us in some form of distress,” Boyea said. “It’s not somebody that maybe would go shopping afterwards after a doctor’s appointment or something of this nature, this is more an urgent care situation.”

“It’s new customers all the time that are having unfortunate situations,” Boyea added. “You want a parking lot, you want good size roads, you want visibility, you want ease of access, so you look for things like that and this has all of those items.”

Both Fire Chief Thomas Groff and board member Matthew Donde, a retired EMT, agreed that the location along Route 30A would be easily accessible by ambulances and other emergency vehicles if a patient required transportation to the emergency room for more advanced treatment.

Board member Peter Semione asked if the facility would accept all types of insurance including Medicare and Medicaid.

“That’s exactly where this would provide a great benefit,” Boyea said, relating that the location would accept all forms of insurance.

“In general an urgent care is less expensive than an emergency room,” he added.

Consultant to the Fulton County Planning Department Sean Geraghty noted that the proposed use of the site would be allowed under city zoning regulations subject to site plan review, asking the board members if they felt the developer and engineer should move forward with designs for the proposed construction project.

“For the use of the property I think this is a good place,” Donde said.

Anderson, Donde and Semione each agreed that the project proposal was appropriate for the site. Bochenek and board member Geoffrey Peck, both employees of Nathan Littauer Hospital, each abstained from offering an opinion.

Boyea and Roche thanked the board for their input saying they will return in the future with a full site plan for the proposed construction of an urgent care center on South Kingsboro Avenue Extension.