State Assemblyman Robert Smullen, a retired U.S. Marine Corps colonel, expresses his gratitude for the sacrifice of those who served in the armed forces during Gloversville’s Veterans Day service at City Hall on Monday. (The Leader-Herald/Ashley Onyon)

Gloversville Mayor Vincent DeSantis welcomes those in attendance at the city’s Veterans Day service at City Hall on Monday. (The Leader-Herald/Ashley Onyon)

Four members of the Gloversville Police Department served as a color guard stand at attention while the Pledge of Allegiance was recited during Gloversville’s Veterans Day service at City Hall on Monday. (The Leader-Herald/Ashley Onyon) 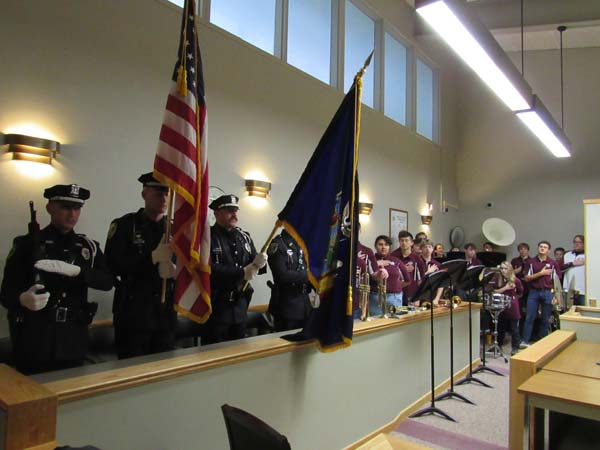 Four members of the Gloversville Police Department served as a color guard stand at attention while the Pledge of Allegiance was recited during Gloversville's Veterans Day service at City Hall on Monday. (The Leader-Herald/Ashley Onyon)

GLOVERSVILLE — Area residents crowded into City Hall on Monday to honor veterans near and far, present and past for their service during the city’s annual Veterans Day ceremony.

“We’re here to really express our gratitude to the men and women who served this country,” said Mayor Vincent DeSantis welcoming those in attendance before relating the sense of gratitude he personally feels towards the nation’s veterans.

DeSantis recounted how despite being drafted into the U.S. Army in 1971 during the Vietnam War while he was attending his first year of law school, ultimately he never faced combat thanks to the sacrifice of all those who came before him.

“So many people have been in that position, living a civilian life, even a professional life and suddenly finding themselves in the military. At some point … you come to the realization that you’re being trained to be in a position where you have to kill or be killed in hand to hand combat,” DeSantis said. “It gives you a perspective of a completely different world that someone is thrown into or volunteers to be put into to defend a constitutional republic, our way of life, the freedom that we have.”

By the time he completed basic training at Fort Dix, New Jersey, DeSantis said the Vietnam War was slowly winding down and he was instead deployed to Europe where he came to recognize more deeply the sacrifice of those who served while visiting cemeteries of the American armed forces. 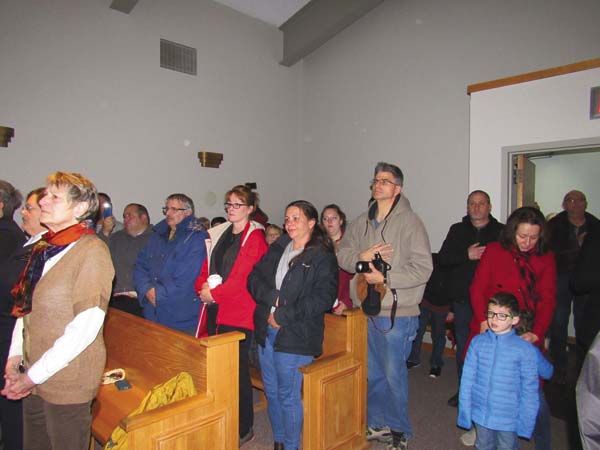 “This is from a soldier who never saw combat, a soldier who was lucky enough to just be in Europe facing off against the Soviet Union across the line, but never actually having to be in a position to kill or die. So I want to express that gratitude, personal gratitude for all of those who served in any capacity. Thank you.”

State Assemblyman Robert Smullen, a retired U.S. Marine Corps colonel, similarly expressed his gratitude for all those who served, leaving their homes and loved ones for months or years at a time, placing the needs of their country over their own.

“Today is a day for reflection, it’s a day for gratitude and ultimately it’s celebrations of the veterans that are in our communities. Our nation’s armed forces have delivered us victories that have literally changed the course of human history. They have protected us from enemies in every corner of the globe,” Smullen said.

“And right now as I give this address here in my hometown of Gloversville, there are people out there serving on your behalf all around the world, protecting our freedoms and they’ll do whatever is necessary to keep us safe,” he continued. “Without these men and brave women, the relative comfort of our daily lives here in Gloversville and Upstate New York would be impossible.” 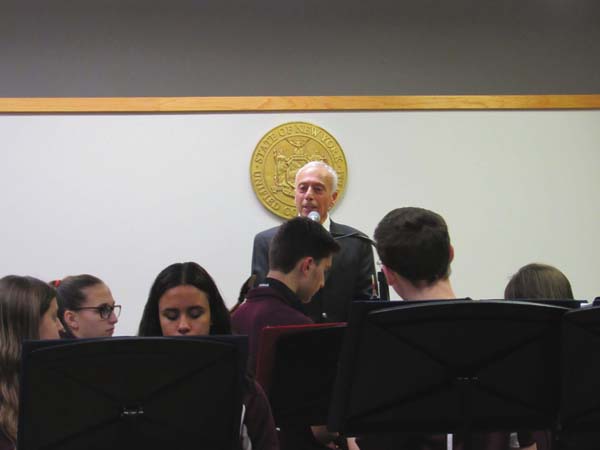 Gloversville Mayor Vincent DeSantis welcomes those in attendance at the city's Veterans Day service at City Hall on Monday. (The Leader-Herald/Ashley Onyon)

In recognition of that service, Smullen encouraged those in attendance to extend a hand of gratitude to all who have served, as well as their friends and families in an expression of appreciation.

“I ask that you take a moment to truly appreciate what they mean to each of you and to our nation,” Smullen said. “To all of our veterans, your service is an example of what it means to be an American; honor, courage and commitment. It is truly humbling to be here today and stand in front of all of those who have chosen this path. Again my deepest thanks to all of you who have served, are currently serving and to those who support them.”

The Veterans Day program began with an invocation given by Capt. Wendy Senior of the Salvation Army, followed by the Pledge of Allegiance.

The Gloversville High School band directed by John Savage performed a selection of patriotic music, including the National Anthem following a moment of silence.

Members of the Gloversville Police Department participated in a four-man color guard. Keith Shoemaker was the master of ceremonies. The ceremony closed with a benediction from Senior. 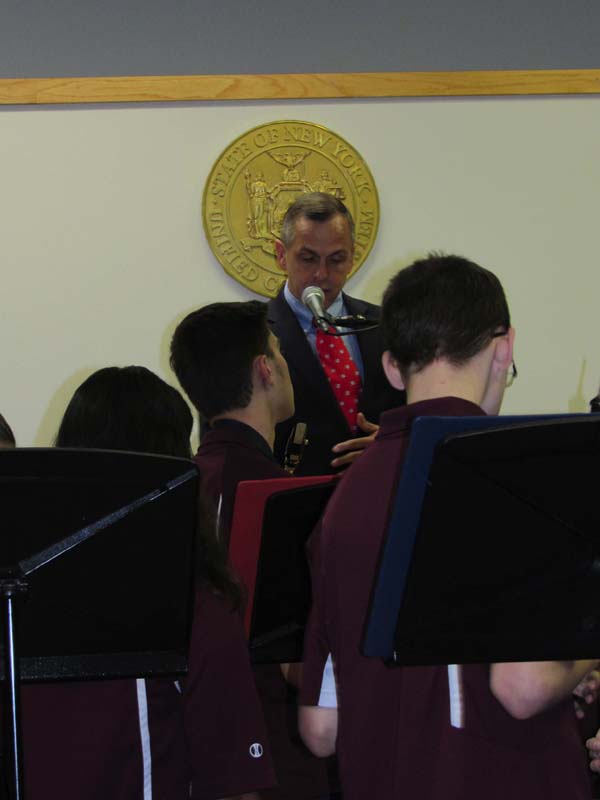 State Assemblyman Robert Smullen, a retired U.S. Marine Corps colonel, expresses his gratitude for the sacrifice of those who served in the armed forces during Gloversville's Veterans Day service at City Hall on Monday. (The Leader-Herald/Ashley Onyon) 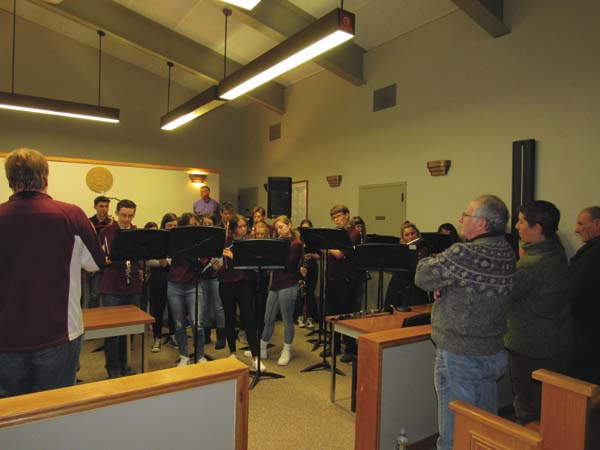