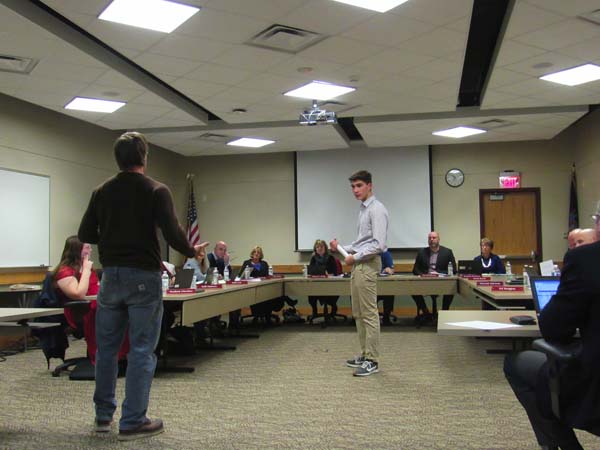 Gloversville High School student Simon Bruce, center, proposed an E Sports video game club to the Gloversville Enlarged School District Board of Education during its meeting on Tuesday. Board members were in favor of the club only if rated M games were not included. (The Leader-Herald/Briana O'Hara)

GLOVERSVILLE — A Gloversville High School student proposed a new club to the Board of Education which would focus on video gaming.

High school student Simon Bruce presented his idea of an Electronic Sports video game club to the board seeking their approval. However, board members questioned if they’d approve the club and allow students to play rated M (for mature) games which include shooting games.

Bruce said the E Sports club has already sparked the interest of about 80 students. The club would allow pupils who wish to participate the chance to compete in teams against other school districts.

“The E Sports club is a club in which kids can play video games for fun, or competitively,” Bruce said. “We will have different teams and they will play other teams within our school and outside of the school.”

He said rather than holding meetings for the club, they could all communicate online through the online server announcements could be made along with any group discussions.

Expenses for the club will cost about $3,500 to $4,000. Expenses include at least five monitors, five PlayStation gaming consoles, five copies of each game and five online passes.

To help with that cost, Bruce said students can bring in their own game controllers and microphones or any other video game pieces, and the club can fundraise.

“You play competitively, you play for scholarships, money and such things like that,” Bruce said.

He said a benefit of the club would be bringing kids who have common interests together, especially kids who may be shy.

Board member Paula Brown-Weinstock said she would not support the use of rated M games, even if parents were to sign permission slips for the students.

“I think as a school district it would be irresponsible for us to support that,” she said. “What your parents want you to do on your time at home, as far as I’m concerned, is your own family business, but as a school board member I could not support that.”

Board member Ed Sturgess said as a board they are responsible to take serious steps to include safety in the district. He said allowing students to play video games that are violent goes against that safety initiative.

Sturgess said he does like the idea of the E Sports club because it would be a good way to keep kids engaged, communicating and competing with other school districts.

Board member Vincent Salvione believed that video games take away from actual sports. He said it’s promoting students using remote controls to play sports rather than getting on a field to play an actual sporting game.

Board members asked Bruce to conduct more research on the conflict to see how other school districts deal with the conflict of allowing rated M games. They also wanted to know how many students would be interested in the club still if they were to approve the club without allowing games that are rated M, such as first-person shooter games.

He said there would be a detailed consent form parents would have to sign which clearly states they are ok with their children playing rated M games.

Brown-Weinstock said she still would not approve something with shooting games.