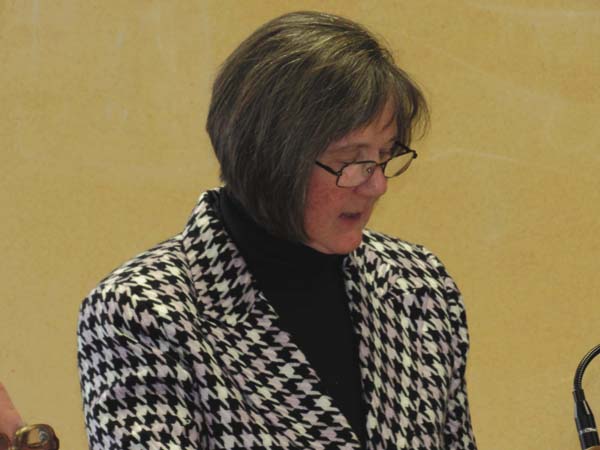 Fulton County Budget Director Alice Kuntzsch lays out the county's tentative 2020 budget for the Board of Supervisors Tuesday at the County Office Building in Johnstown. (The Leader-Herald/Michael Anich)

JOHNSTOWN — Fulton County’s $93.5 million tentative budget for 2020 carries an average property tax rate increase of 3 percent across the county, but the tentative levy hike is below the state tax cap.

The Board of Supervisors on Tuesday at the County Office Building voted 19-0 to accept the tentative spending plan.

“Human services is the largest part of the budget and the most significant as far as the tax levy,” said county Budget Director Alice Kuntzsch.

But Kuntzsch said the tentative tax levy hike of 3.7 percent would be below the state tax cap of 3.9 percent. She used a property owner of a home assessed at $120,000 as a reference point, saying that person’s tax bill would go up by $38 next year.

Fulton County has “conservatively” applied about $2.45 million in general fund balance to help balance the budget at this point, Kuntzsch said.

Kuntzsch said the tentative budget indicates only a $116,088 or .01 percent increase in appropriations from the current 2019 county budget. Federal and state aid to Fulton County is expected to increase by $830,272, or about 4 percent, next year.

Personnel costs make up a significant portion of the tentative budget, about 43 percent, with an increase of 2 percent or $1.6 million earmarked over 2019. The Fulton County Sheriff Office Employees Alliance contract terminates next month.

“Public safety has always been a priority for the Fulton County Board of Supervisors,” Kuntzsch said.

Kuntzsch said some of Fulton County’s fiscal health is based on total assessed valuation of property, or TAV, which has “remained essentially flat.”

Along with public safety matters, Kuntzsch said the Board of Supervisors continues ongoing discussions for the best plan to address emergency medical services within the county.

Kuntzsch said county reserves continue to be a “valuable tool” to maintain physical assets and promote economic development. Tax on hotel room occupancy revenue of $230,726 has been budgeted to offset a larger portion of the county’s Tourism Promotion Program. Investments in capital projects for 2020 include $675,000 specifically earmarked for economic development and new land development.

Development of the 2020 county budget began in June, with department heads filing their preliminary budget requests with Kuntzsch’s office in July. At that stage, the county’s requested budget reflected an 18.2 percent county tax levy increase.

In a message to the board in the budget, Kuntzsch wrote: “The 2020 tentative budget is a balanced financial plan that maintains a solid fiscal foundation for the county and is within the New York state tax cap.”