Many absentee ballots still left to be counted 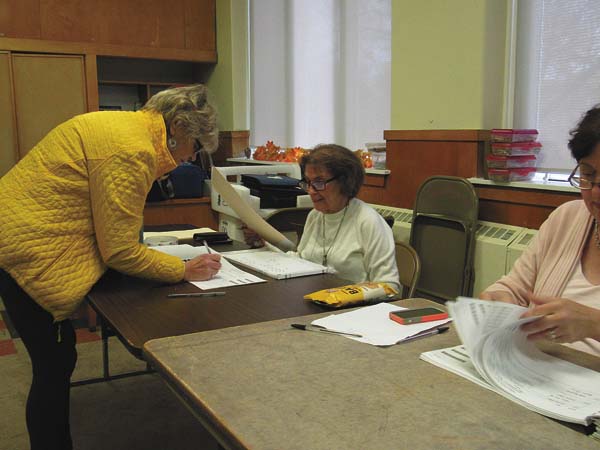 Eilleen Wrightsman of Gloversville signs in at a polling station located at the Church of the Holy Spirit before casting her ballot in city and Fulton County Elections on Tuesday. (The Leader-Herald/Ashley Onyon)

GLOVERSVILLE — Mayor Vincent DeSantis will remain in office for the next two years following the return of unofficial election results in Fulton County on Tuesday. The race for councilman-at-large remains too close to call with challenger William Rowback Jr. currently in the lead against incumbent Steven Smith by 47 votes, with over 120 absentee ballots returned to date still to be counted in the coming weeks.

Running for mayor on the Democratic and Gloversville Party lines, DeSantis handily defeated Libertarian challenger Dale Henry McGrath, taking in approximately 77 percent of votes in the city with 1,152 compared to 320 for McGrath.

A total of 28 votes were cast for write-in candidates for the mayor’s post. Brandon Rowback, Brian Rowback and Joshua Southworth each launched write-in campaigns for the city’s top elected office on Facebook.

DeSantis will fill the remaining unexpired two year term of former Mayor Dayton King, who resigned from office on Jan. 9 as part of a plea agreement he accepted in City Court earlier that day when he pleaded guilty to official misconduct, a misdemeanor, for using the city’s postage meter to conduct personal business.

The Common Council appointed DeSantis as the city’s new mayor Jan. 11 and on Tuesday he was elected to fill the seat for the first time.

Over the next two years, DeSantis hopes to continue working with the Common Council to tackle blight through initiatives that were launched during his first 10 months as mayor.

“We’ve gotten a tremendous amount accomplished and I hope to continue that. The important thing is that we are working together, the relationship with the council has been very good and I’m confident that will continue,” DeSantis said.

“I am looking forward to continuing the redevelopment of the neighborhoods by trying to eliminate blight,” he added. “Probably the most important thing we can do in the city is to make room for new development by eliminating buildings that are completely unproductive and a drag on the neighborhoods they are in.”

DeSantis is hopeful that before the end of his elected term in office the city will begin implementing projects related to the $300,000 Brownfields Assessment Grant the city received from the U.S. Environmental Protection Agency earlier this year.

“By the end of two years, I’m hoping to be implementing cleanups in some of these former industrial sites we have which really will make a big impact on the quality of neighborhoods,” DeSantis said.

In the race for DeSantis’ unexpired two-year term as the city’s former councilman-at-large, challenger Rowback, registered as a Republican and member of the Stump City Team, currently holds a narrow lead against Smith, Democrat/Gloversville Party, taking in approximately 51 percent of votes that have been counted so far, with 853 to Smith’s 806.

According to an official with the Fulton County Board of Elections, a total of 206 absentee ballots were issued citywide and a total of 124 had been returned as of Tuesday morning. Additional ballots postmarked by Nov. 5 may still be returned before the board begins opening absentee ballots covering the entire county Nov. 18.

Official results from the county board of elections are due by Nov. 29, but officials say final results will likely be in ahead of that date.

When contacted this morning, Smith said he would reserve comment on the race for councilman-at-large until final results have been returned while acknowledging that the lead currently held by his opponent will likely stand after absentee ballots have been counted.

Rowback was not immediately available for comment before press time today.

In the race for the 4th Ward Common Council seat, current Councilwoman Brenda Leitt, a Democrat and member of the Gloversville Party, was defeated by former Councilwoman Ellen Anadio, running as a Republican and member of the Stump City Team. Leitt was appointed in February to the seat formerly held by Smith that was set to expire this year.

Anadio was elected to the full four-year term with 145 votes, approximately 56 percent of the vote, to Leitt’s 114. A total of 15 absentee ballots have been returned for the 4th Ward, meaning Anadio’s win is expected to stand following the return of official counts.

Incumbent Republican 2nd Ward Councilman Arthur Simonds and Republican 6th Ward Councilman Wrandy Siarkowski faced no opposition in their re-election bids and will return to their seats after capturing 124 and 153 votes respectively.

Incumbent Republican city Water Board members Stephen Mauro and Gary Antonucci were each reelected with 1,001 and 1,151 votes respectively. They did not face any opposition in their reelection bids.